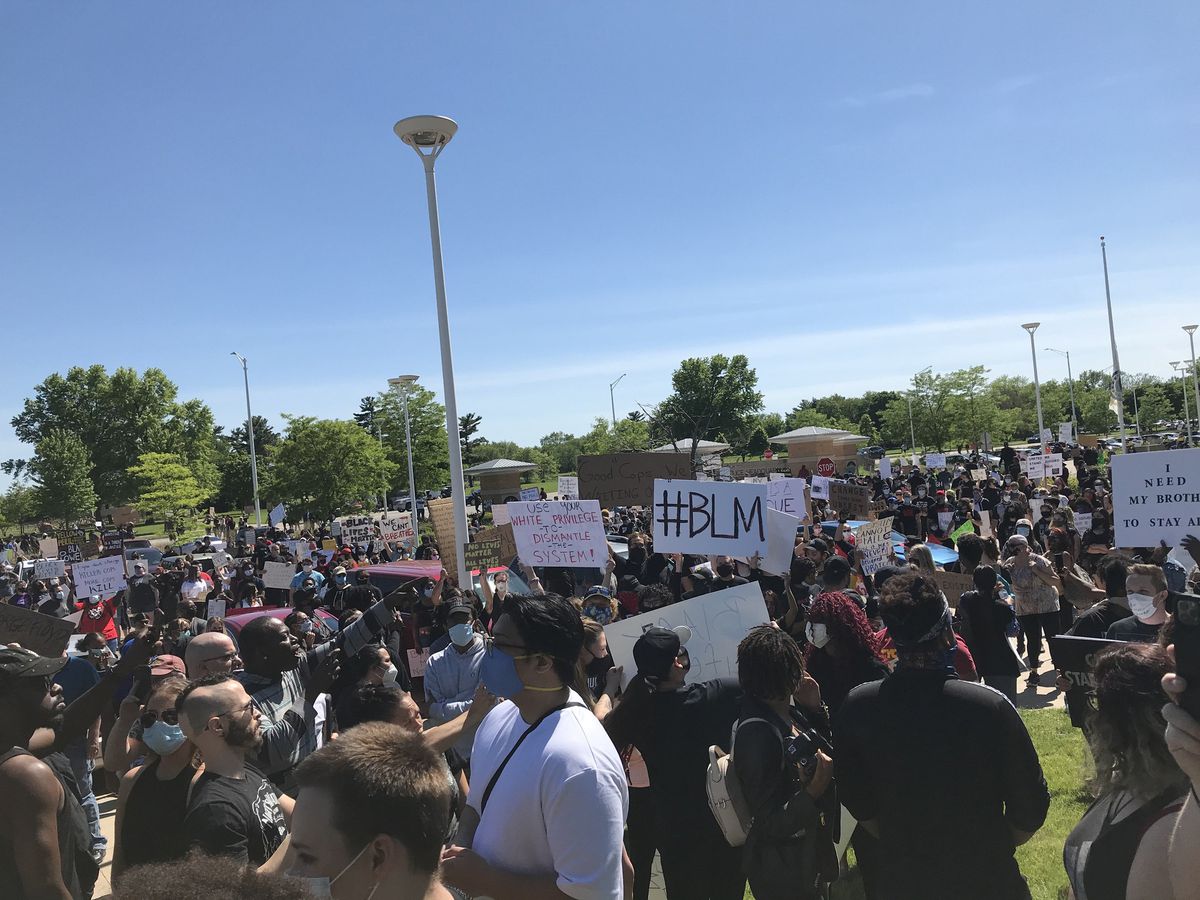 Hundreds of people gather during a rally Sunday outside the Aurora Police Department.(Megan Jones / The Beacon-News)

Police and protesters clashed in downtown Aurora Sunday night and hundreds of people rallied in the city following the death of George Floyd in Minneapolis.

Aurora Mayor Richard Irvin imposed a curfew on the city Sunday night. The curfew, announced shortly before 8 p.m., was to take effect from 8:30 p.m until 6 a.m. Monday, “due to the widespread incidents of violence, vandalism and stealing occurring throughout the City of Aurora,” police said.

Protests throughout the day turned tense Sunday evening near downtown. A police squad car was burning.

Police appeared to use tear gas to break up the crowd downtown although they would not confirm that. Protesters were seen crying with stinging eyes, using milk to alleviate the pain, and a reporter felt the sting of the gas in the air.

They condemned Floyd’s death and aired grievances toward police as they gathered outside the Aurora Police Department, some yelling frustrations and others urging calm and encouraging the aggrieved to talk about their concerns. Then, some protesters turned angry toward police as they marched and drove to downtown in a chaotic swarm, where they were met with a large police presence outside City Hall.

Roads were blocked by police and marchers during the afternoon, and at one point police urged downtown businesses to close.

“There are multiple protests in the City of Aurora," police wrote on Twitter shortly after 5 p.m. “Please avoid the downtown area for your safety. Downtown businesses are asked to please close their businesses immediately.”

The protest came in response to the death of Floyd, a black man who died May 25 after Minneapolis police officer Derek Chauvin, who is white, was captured on video pinning down Floyd by his neck.

Chauvin and three other officers were fired, and on Friday authorities said Chauvin had been charged with third-degree murder and manslaughter.

Floyd’s death has sparked national outrage and led to protests, rioting and looting in cities across the country. Rallies and marches took place throughout the weekend in various suburbs, and protests in Chicago turned violent. 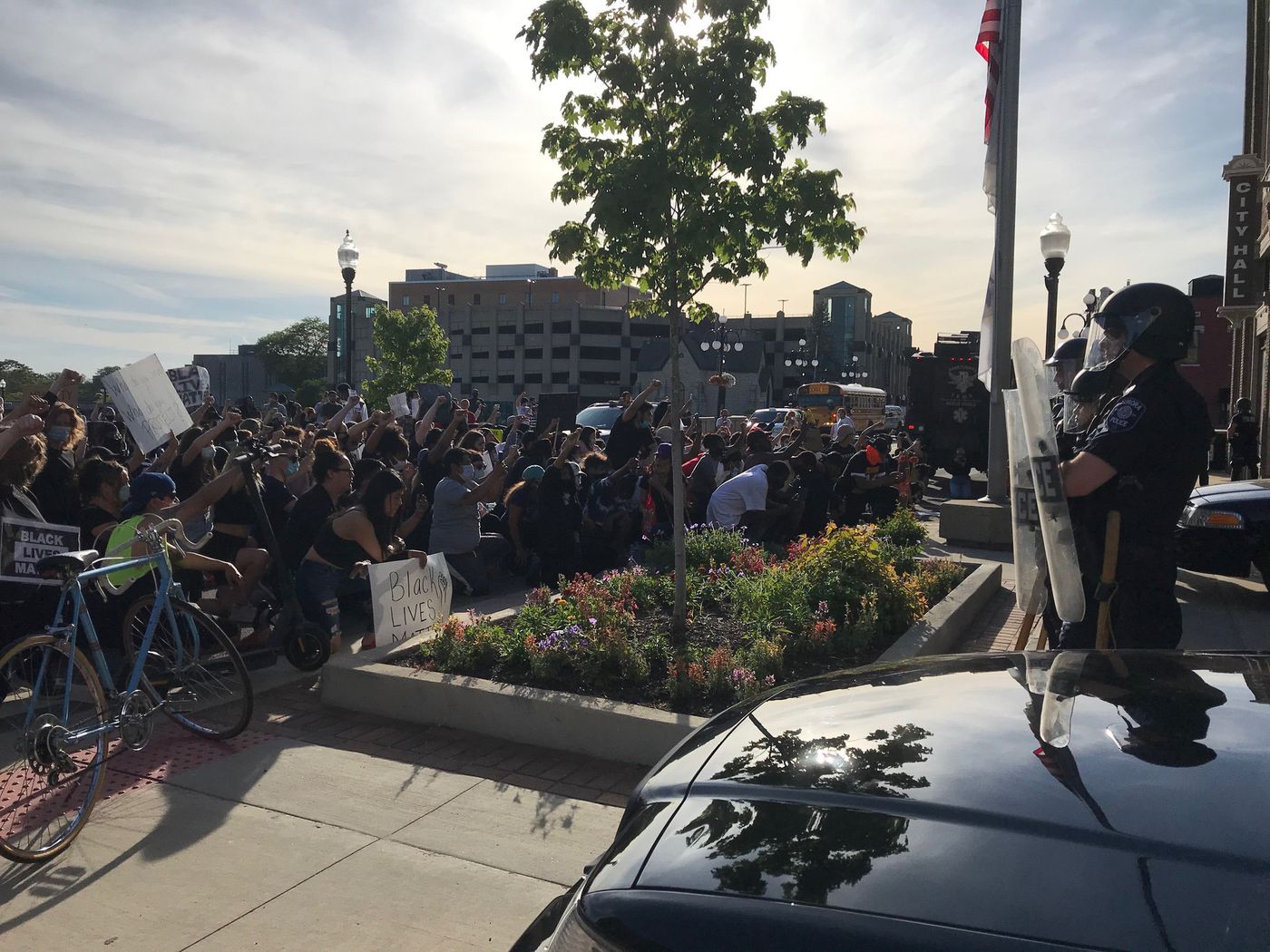 Protesters gather Sunday in front of a line of police outside Aurora City Hall.(Megan Jones / The Beacon-News)

In Aurora, a small crowd outside the Aurora Police Department Sunday afternoon quickly grew into several hundred protesters. They carried signs reading “police get away with murder,” “justice for George,” and “decriminalize race and poverty.” Cars on East Indian Trail in front of the department honked their horns as they drove by.

Protesters chanted frustrations against police and some shared personal stories about their experiences.

Ziman was met with mixed reactions from the crowd. Some asked to let Ziman speak. Others shouted over her.

After about 30 minutes, protesters at the rally began talking and yelling over each other, as organizers called for calm. Some broke away to march along Indian Trail near the police station, blocking traffic, while Ziman spoke to others who had gathered in a smaller crowd around her.

“Any officer who thinks that’s OK needs to turn in their badge,” she said, referring to Floyd’s death. “And I stand by that.”

Aurora activist Casildo Cuevas held a large white cross, made by George Zanis, with a heart that said “love.” He said he was disappointed in the protest and city officials’ involvement because he does not believe they addressed the issues at hand.

“We need to get to the root of why this is happening and that was danced around,” Cuevas said. “They didn’t say how we are going to change the narrative. That’s why they lost the attention of the crowd because these people were here to see a solution and a change. Not people to glorify themselves.”

As the afternoon progressed, protesters walked and drove toward downtown Aurora. They honked car horns and carried signs reading, “no justice no peace” and “black lives matter.” Cars and motorcycles blocked the intersection of Galena Boulevard and Broadway, and some protesters screamed expletives about police.

Police closed I-88 exit ramps to Farnsworth Avenue and Eola Road before the rally began. They later closed off a portion of Farnsworth Avenue near the Chicago Premium Outlet Mall. Entrances to the mall were blocked off.

Saturday, Irvin said in a statement he was “hurt and outraged over the senseless and brutal killing,” and outlined the implicit bias training and de-escalation training Aurora police officers receive.

“I have sat and observed the events of this week – from the suffering of the underserved to the tragic death of another unarmed Black man to the destruction of a community,” he wrote. “I hurt for all involved, and I understand the pain from a very personal place.

“I know we must do more, and we must do better if there is any hope for real healing now - and into the future.”

Sunday, Ziman called for calm before the protest began.

“Today at APD headquarters, we welcome protestors and stand with them,” she wrote.

“This is a plea to protest peacefully so we can preserve what we’ve built in our city.”

Avangard congratulated Zenit with the title: it's Time to match and take the Gagarin Cup
Coach of Orenburg Pro 0:1 with Rubin: Morally devastated, could have drawn
Kike Setien: Griezmann played a great match, understood Messi well, scored a great goal. We changed something
Barca President on the Real Madrid match: VAR always favours one team. I have an unpleasant feeling
Faty scored the 9,000 th goal in the history of Barcelona
Griezmann scored in La Liga for the first time since February with a pass from Messi
Suarez came out on the 3rd place in the list of the best Barca Goalscorers in history
Source https://www.chicagotribune.com/suburbs/aurora-beacon-news/ct-abn-aurora-george-floyd-rally-st-0601-20200531-q4koz534mbdgfkjji727l7vkai-story.html#ed=rss_www.chicagotribune.com/arcio/rss/category/news/

Steve Hilton: 5 things Trump should do to win reelection

Rushmore was Trump at his best: Devine

At least 2 dead, 7 missing in boat capsizing in Indonesia

Italy’s problem with working women made worse by coronavirus

Rep. Steube fires back at Trump critics over July 4 address: 'They will criticize anything he does'

Frederick Douglass Statue Torn Down and Vandalized in Rochester, N.Y.