In 2018, Georgia native Tom Saccenti and his then-8-year-old son Micah decided to make an American Flag from leftover wood, something they had seen done in a YouTube video. After a few failed attempts they finally had an end product they loved and a new hobby to do together.

“My dad and me thought it would be a good idea to do it as a father-son project. We loved it so much that we went to our church and we showed them how to do it for Veterans Day. We made about 20 flags before we got it right,” Micah told Fox News.

Saccenti, a former police officer, goes around the country with his family teaching new safety techniques to local police departments, universities and churches. 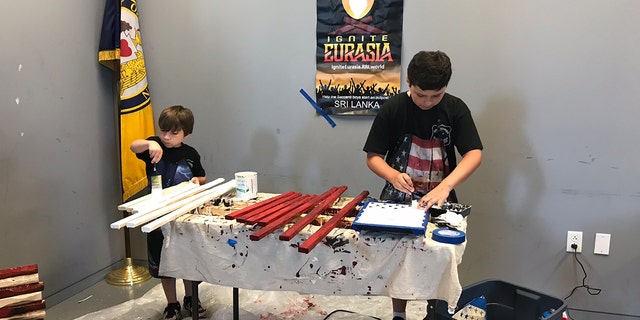 Two years later Micah, 10, is still making flags except now he makes them with his 8-year-old brother, James. The two brothers have continued to make flags for their community even while they traveled with their father to his educational conferences. During each of their father’s trips, the boys give a flag away to one lucky raffle winner.

The flags are given out for free to veterans or officers, but conference attendees have the option to donate to the Boys and Girls Missionary Challenge, a Christian organization focused on educating children about religion in other parts of the world.

Once coronavirus stay-at-home orders were put in place, Saccenti's conferences were put on hold but that did not stop James and Micah from making flags. The boys had the idea to transition to making blue-line flags and delivering them to police officers in nearby police departments.

“We thought what can we do at our home to kind of still honor people who are working during this time. And so we thought what a great way to honor some of our local heroes, police officers,” said Saccenti.

So far, the Saccenti boys have given away 50 flags and have raised over $2,000 for the Boys and Girls Missionary Group, and they have no plans of stopping anytime soon. Their next step? Saving up for an engraver so they can put the hero's name on the flag before giving it to them.

Flick about the Cup final with Bayer: It will not be like in the championship. They can hurt us
Holland will play in Dortmund and under 9-m number from the next season
Solskjaere and Lampard are among the contenders for the title of best coach in June in the Premier League
Umtiti injured his left knee. He won't have surgery
Thibaut Courtois: there are a lot of difficult matches Ahead, but it is better to be 4 points ahead than to fall behind with such a margin
Bayern have not received offers for Tiago, but the player has already said goodbye to the team
Bruno, martial, Ings and Jimenez – among the contenders for the prize of the best player of June in the EPL
Source https://www.foxnews.com/media/father-and-sons-build-american-flags-for-veterans-and-police-officers

What Sweden can teach us about coronavirus

Summer Mom Style: Moving Out of Your Quarantine Wardrobe (at least a little bit)

STATE Kids on the Move Collection

Californians are losing their fear of the coronavirus, setting the stage for disaster

How can we ban facial recognition when it’s already everywhere?

Wear These Sandals and Flip Flops to the Pool or Beach

How Taffy Brodesser-Akner Proved Everyone Wrong

33 villagers killed in attacks in central Mali this week

How the hot dog became an American icon

Twitter drops 'master', 'slave' in a bid to make its algorithm more inclusive

What you need to know about coronavirus on Friday, July 3

These moms wore masks while giving birth. You can wear one to the grocery store, they say

PM Modi's clear message to China from Ladakh: Age of expansionism over, this is age of development

People, officers left trapped in vehicles by swarms of protesters -- but officials mute on how to handle

Quarantine-free travel from U.K. to Cyprus to start Aug. 1

Feedback: Readers on the 1st Amendment, blackface and 'Law & Order'

Drill Down To County Level And The U.S. COVID-19 Outbreak Looks Even Worse

The radicalism of the American Revolution — and its lessons for today

German lawmakers approve plan to phase out use of coal

Hamilton fastest in the 1st practice for Austrian Grand Prix