The family of a woman whose breasts were allegedly fondled by an on-duty L.A. police officer who found her dead last fall is suing the officer and the city of L.A.

The family of Elizabeth Baggett notes that LAPD Officer David Rojas already has been charged criminally in the case, and that his own body-camera footage allegedly captured him in the act of molesting her.

They allege a slate of offenses in the incident that occurred last fall, including negligence, invasion of privacy, mishandling of human remains, and the intentional infliction of emotional distress.

“I am infuriated that this man had so little respect for another human being, our Elizabeth, for not having the thought that she is someone’s daughter, granddaughter and mother,” said an emotional Janet Baggett, Elizabeth Baggett’s mother, at a news conference announcing the lawsuit at the L.A. offices of attorney Gloria Allred. 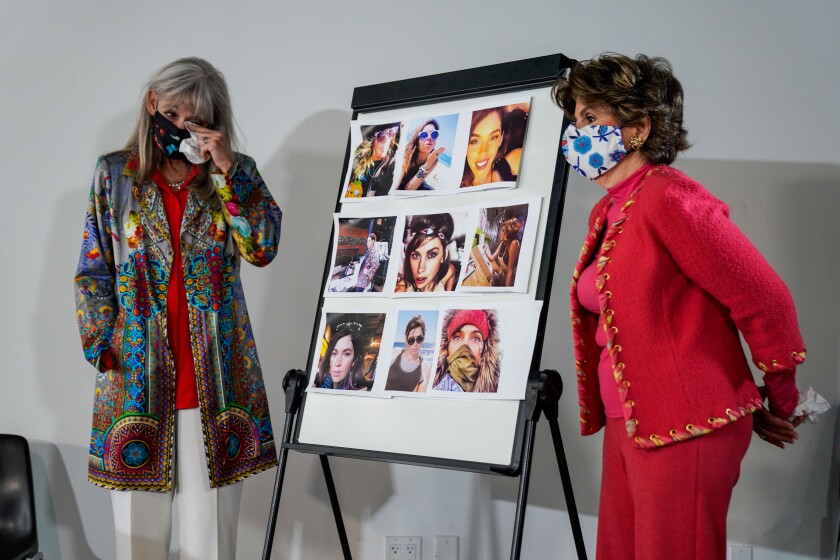 Janet Baggett and attorney Gloria Allred stand alongside a display of photos of Baggett’s late daughter at a news conference Tuesday in Los Angeles.

“We, her family, have sleepless nights, if we are able to sleep. I personally wake in sweats from the nightmares that haunt me about the events of Elizabeth’s death,” Baggett said. “Days are not much better.”

Allred, who represents the family, said Rojas’ alleged actions were not just against the law, but also went against “all sense of human decency.”

The incident allegedly occurred Oct. 20 after Rojas and his partner went to a home where there was a report of a dead body. After finding the body of 34-year-old Elizabeth Baggett, Rojas’ partner returned to the patrol car to retrieve something. It was then that Rojas turned off his body camera and allegedly fondled her breasts.

After the body-camera footage was discovered by a detective investigating Baggett’s death and reported, Rojas was placed on leave, which the Los Angeles Times first reported in early December. He was subsequently arrested and charged with a felony violation of the state safety codes covering sexual actions with human remains.

Rojas pleaded not guilty to the charges in January and was released on $20,000 bail pending trial. His attorney, Robert Ernenwein, did not immediately respond to a request for comment on the new lawsuit Tuesday.

Rojas had been on the force for four years.

Josh Rubenstein, an LAPD spokesman, said the department could not comment on pending litigation. City Atty. Mike Feuer’s office, which represents the city in legal matters, did not immediately respond to a request for comment.

Allred said the city never responded to a notice of the family’s claims that she filed with the city months ago, as required before litigation.

Janet Baggett said she was first informed of the allegations against Rojas by LAPD internal affairs officers in late 2019, and that she and the rest of her daughter’s family — including her daughter’s 15-year-old son, Preston Sertich — had struggled to wrap their heads around Rojas’ alleged actions ever since.

In his own statement, which was read by Allred on Tuesday, Preston said he used to want to be a police officer but had since lost all trust in police.

“What has this officer gotten away with to believe this was even possible?” the boy asked in his statement. “Is there a pattern of behavior against women, arrestees or decedents? How could you employ this man and let him represent your City?”

Rojas’ criminal trial has been postponed multiple times due to the COVID-19 pandemic. Allred said the delays had caused added heartache for the family.

What kind of goalkeeper did Chelsea take? Edouard Mendy was out of work 6 years ago, impressed the Czech and will replace Kepu
Solskjaer on Manchester United signing only van de Beek: You show disrespect to Donny, he's a top player
Milan want to sign striker Bude-Glimt Hauge. He scored them in the Europa League on Thursday
Rivaldo: Barcelona will not be easy without Suarez's goals
Munir from Seville was forced by FIFA to rewrite the rules. Now players can change the national team
Lampard will talk to Kepa and Caballero after signing Mendy
Ralf Rangnick: Havertz - Cruyff of the present day. I don't see any weaknesses in his game
Source https://www.latimes.com/california/story/2020-08-11/family-of-dead-woman-allegedly-groped-by-lapd-officer-files-lawsuit

On The Ascension, Sufjan Stevens Is Born Again, but as What?

Stream It Or Skip It: ‘Tehran’ On Apple TV+, Where A Mossad Agent Goes Undercover In The Iranian Capital

The Banks Are Back: Watch the ‘Father of the Bride’ Reunion Here

These Are Halloween 2020's Most Searched for Makeup Tutorials

What's It Like To Volunteer In A COVID-19 Vaccine Trial?

David Beckham is reportedly really into beekeeping these days

Power is performative—let's remember that when Trump contests the election

Dax Shepard Shares He Relapsed After 16 Years: Revisit His Honest Quotes About Sobriety and Addiction

Steele dossier source revelations show 'we never should have had a special counsel': Sen. Ron Johnson

Making History, Ginsburg Is Honored at a Capitol Divided Over Replacing Her

When Biden calls a 'lid,' Democrats wet the bed — and Trump starts mocking

Would Amy Coney Barrett on the Supreme Court Cost the G.O.P. the Senate?

A woman was tased at a football game after refusing to wear a mask. Was the officer right?

Willie Randolph details the events around his bizarre Mets firing

Stream It Or Skip It: ‘The School Nurse Files’ On Netflix, A Korean Dramedy About A School Nurse Defends Students By Seeing Things Others Don’t

Amazon’s Utopia Should Never Have Been Released in 2020

The promise and peril of the EU’s new asylum plan

Raiders will be without speedy receiver Ruggs vs Patriots

Ang Rita, Who Conquered Everest Again and Again, Dies at 72

Employee or Freelancer: Which One Do I Need?

As O.C. campuses bring back students, here's how schools in other countries are handling reopening

Trump uses FBI director as a foil ahead of Election Day

Dell's high-end XPS 17 is a workhorse in disguise

Stream It Or Skip It: ‘Utopia’ On Amazon Prime, Where Fans Of A Comic Book Have To Save The World

Queens bar made famous by ‘Goodfellas’ looted by burglars

Keeping It Eel: How One Historian Is Using Twitter and Medieval Factoids to Help Endangered Animals

Florida reopens bars and restaurants with no restrictions