A warning message requesting people not to accept a video titled 'Amit Shah disowns Modi' has been fast circulated on Whatsapp. It seems to be a fake, as there is no government's announcement regarding it.

The widely circulated Whatsapp message reads, "Pls inform to all the contacts on your list not to accept a video called the "Amit Shah disowns Modi" It is a virus that formats your mobile. It is very dangerous. They announced it on the radio today. Fwd this MSG to as many as you can. High alert Pls block this no 9266600223 They are credit/debit card hackers. Pls inform all your near and dear ones." 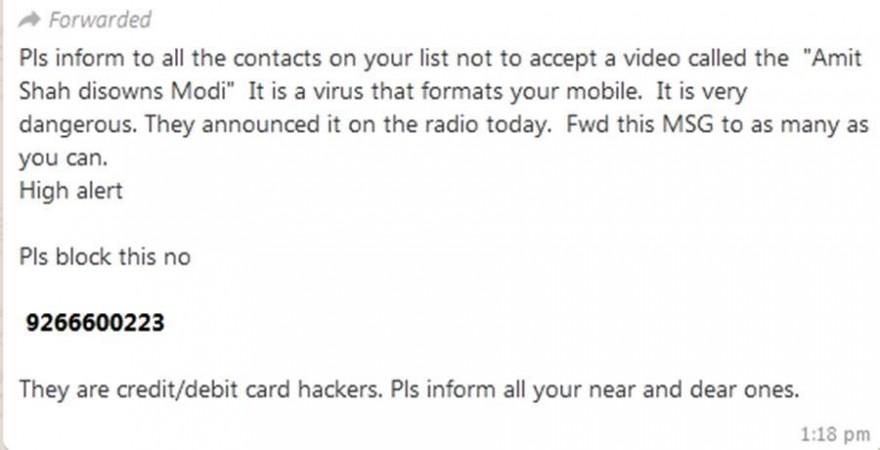 Firstly, there is no such announcement about the virus made on any Radio station. Secondly, we did not find any information on Google when we searched for the details of any such virus. Thirdly, if there is such a dangerous virus, the government would have made an official announcement about and cautioned the people about its adverse effects. So there is no need to panic and forward the above message.

The person, who first created the message, has also requested the people to block the mobile phone number – 9266600223. When we checked the details of this number on Truecaller, we found out that it is registered with the name 'Crd Credit Card (Fraud)' and 46,830 people have reported it as spam under the category of 'Finance, Insurance & Legal'. He might have created to punish the person with this no cheated him with his credit card. 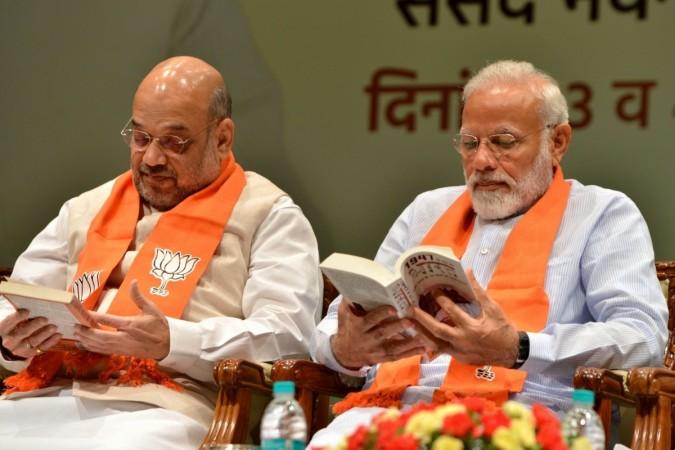 Of late, social media channels especially WhatsApp have become platforms to circulate false news and misinformation and create a deluge among the general public. Many people have fallen prey for misleading information about politicians, celebrities, and current affairs like novel COVID-19. Some celebs and politicians have tried to create awareness about the developments, but all their efforts have gone in vain.

This is not the first time such a false claim is made on social media. Back in 2017, a claim titled 'Sonia disowns Rahul' had created a lot of buzz on social media. But some fact-checking agencies were successful in bringing the fact before the public. We request our readers to fact check before forwarding such messages on WhatsApp or any other social media platforms.

Flick about the Cup final with Bayer: It will not be like in the championship. They can hurt us
Holland will play in Dortmund and under 9-m number from the next season
Solskjaere and Lampard are among the contenders for the title of best coach in June in the Premier League
Umtiti injured his left knee. He won't have surgery
Thibaut Courtois: there are a lot of difficult matches Ahead, but it is better to be 4 points ahead than to fall behind with such a margin
Bayern have not received offers for Tiago, but the player has already said goodbye to the team
Bruno, martial, Ings and Jimenez – among the contenders for the prize of the best player of June in the EPL
Source https://www.ibtimes.co.in/fake-news-alert-viral-whatsapp-message-warning-about-amit-shah-disowns-modi-false-821640

What Sweden can teach us about coronavirus

Summer Mom Style: Moving Out of Your Quarantine Wardrobe (at least a little bit)

STATE Kids on the Move Collection

Californians are losing their fear of the coronavirus, setting the stage for disaster

How can we ban facial recognition when it’s already everywhere?

Wear These Sandals and Flip Flops to the Pool or Beach

How Taffy Brodesser-Akner Proved Everyone Wrong

33 villagers killed in attacks in central Mali this week

How the hot dog became an American icon

Twitter drops 'master', 'slave' in a bid to make its algorithm more inclusive

What you need to know about coronavirus on Friday, July 3

These moms wore masks while giving birth. You can wear one to the grocery store, they say

PM Modi's clear message to China from Ladakh: Age of expansionism over, this is age of development

People, officers left trapped in vehicles by swarms of protesters -- but officials mute on how to handle

Quarantine-free travel from U.K. to Cyprus to start Aug. 1

Feedback: Readers on the 1st Amendment, blackface and 'Law & Order'

Drill Down To County Level And The U.S. COVID-19 Outbreak Looks Even Worse

The radicalism of the American Revolution — and its lessons for today

German lawmakers approve plan to phase out use of coal

Hamilton fastest in the 1st practice for Austrian Grand Prix