Amidst the ongoing war of words between Urmila Matondkar and Kangana Ranaut, that has now turned into a major controversy, an advertisement by Amul featuring the Rangeela actress has surfaced online and is doing the rounds on social media.

The ad carries a cartoon of Urmila in a red dress with a plunging neckline as the caption reads, "Not MASOOM anymore?"

Now, as Amul has a knack of coming up with creatives related to trending topics, netizens assumed that the ad featuring Urmila is a recent one and started to call out the company for being "misogynistic". 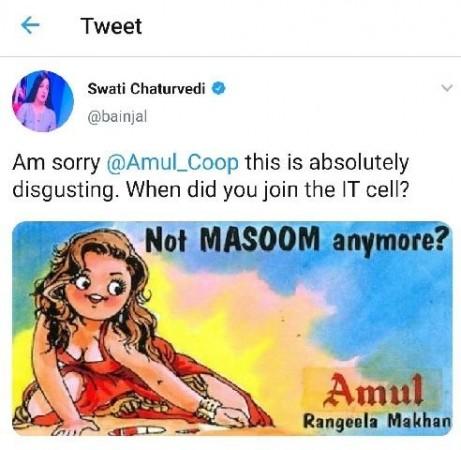 The ad which is being paddled as Amul's recent take on the fresh controversy is actually from 1995 when Urmila's Rangeela had just come out. The creative was meant to acknowledge Urmila's tremendous onscreen journey from a child artist in 1983 release Masoom to a stunning performer in Rangeela.

A reverse image search revealed that Ram Gopal Varma, the director of Rangeela, had shared the ad last week on completion of 25 years of the iconic film. "Amul hoarding after RANGEELA released," had captioned the post.

Furthermore, Anurag Kashyap came forward and clarified the misunderstanding pertaining to the ad. "If I am not mistaken, this came out when "Rangeela" released and not now. And it was based on the fact that Urmila was the child actor in "Masoom". It was meant to be an appreciation. Now misused by trolls after the current scenario," he wrote.

If I am Not mistaken , this came out when “Rangeela” released and not now. And it was based on the fact that Urmila was the child actor in “Masoom”. It was meant to be an appreciation . Now misused by trolls after the current scenario.

Simultaneously, scores of other Twitter users including Tehseen Poonawalla took down their earlier posts and put out a new tweet stating that the ad was taken out of context and that it has nothing to do with the latest Urmila-Kangana row.

Veron about Messi: Playing in Barca gives him discomfort
Mitryushkin on the move to Fortuna: Germany is a country of goalkeepers. I can learn a lot here
Scott Micromini: There is no point in beating PSG if you don't play the same way with Leipzig
Alejandro Gomez: Have Ricica was the coronavirus, and he fell into a depression. Now everything is fine with him
Lyon wants to rent Griezmann and is ready to give Barca Depay for free in the event of a deal (Okdiario)
In the attack against Bayern, Nikolic can use the Hoffenheim technique-luring into the pressure and a long pass to the Alaba zone
Bayern - Loko-Utkin's first match as a commentator: insured Yevgeny Mayorov, set up in the corridor, after the return 0:5 joked about beer
Source https://www.ibtimes.co.in/fact-check-did-amul-take-dig-urmila-matondkar-post-kangana-ranauts-soft-porn-star-comment-828249

Barrett Is Seated at a Pivotal Moment

Vote Smarter 2020: Can You Register To Vote On Election Day?