Even LinkedIn Has Stories Now 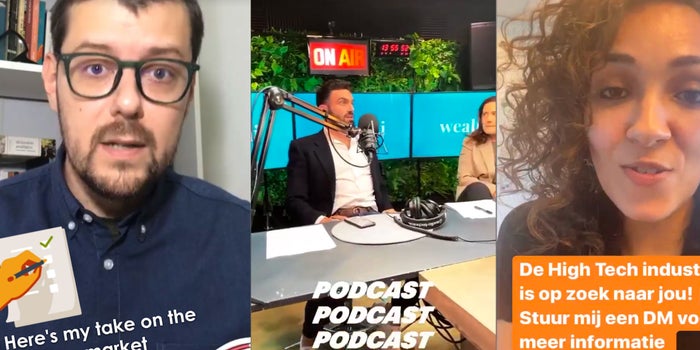 This story originally appeared on Engadget


LinkedIn is the latest platform to embrace the disappearing Stories format. The professional-networking site unveiled its latest redesign that makes the company’s months-long experiment with LinkedIn Stories official. Beginning today, the company is rolling out the feature to all its users in the U.S. and Canada, with plans to push it out to everyone in the next few weeks.

LinkedIn’s version of Stories is a lot like what you’d find on Instagram or Snapchat. Take a photo, decorate it with text or a GIF and upload to your profile for all your professional connections to see for 24 hours (you can change up your privacy settings to control who can view your Story). And, in case you need an extra reminder that the feature exists, LinkedIn will place all your connections’ Stories at the top of your main feed.

That might sound like the last feature you’d want or need on LinkedIn, but the company says there are some benefits to consider. Liz Li, LinkedIn’s senior director of product, says that early tests of the feature have shown that some people are more willing to post when they know it will disappear after 24 hours, rather than live on their LinkedIn profile forever. “Members in the past have found sharing on LinkedIn to be intimidating,” Li told Engadget. “We're hoping it'll spark more conversations from people who just don't really share content on LinkedIn.”

Related: 6 Tips on How to Use Instagram Reels to Grow Your Brand

Li also notes that Stories can help coworkers feel connected at a time when many people are still working from home and may otherwise feel disconnected from colleagues. That said, she says the intention is to keep things professional. Stories will feature a rotating “question of the day” that’s supposed to help keep folks on track.

“You're not meant to share the same things that you would on other networks,” Li says. “That doesn't mean you can't share a picture of your dog … but the goal is to keep it keep the conversations in the same vein that you would have right in your workplace.”

Besides Stories, the redesign comes with some other updates. The site’s search features have been overhauled to include new filtering options and the ability to find online courses and other LinkedIn content from the main search tool. Messaging is also getting another Facebook-like feature with emoji reactions, as well as the ability to start a video call directly from chat. Video calling, which will roll out in October, supports Zoom, Microsoft Teams, Slack and BlueJeans (which is owned by Engadget’s parent company, Verizon).

Ryan Giggs: It may be 15-20 years before the Manchester United title
Galaxy fired head coach Skelotto
Gattuso about 1:0 Sociedad: match depended, decide whether Napoli the task of advancing to the playoffs the Europa League more than half
The fall of the Portuguese, whom Cristiano put above himself. From Chelsea and Mercedes in 16-to viewing in Kuban and term for drugs
Juve are in talks with the sacked Sarri to terminate their contract. The coach received 5.5 million euros a year
Fonseca Pro 0:0 with CSKA Sofia: The quality of Roma's game in Serie A is different, but that's normal. Rotation is needed
Wolfsberg midfielder Lindl is among the contenders for the Europa League player of the week. He scored 3 goals for Feyenoord
Source https://www.entrepreneur.com/article/356681

Puerto Rico's child entrepreneurship and its philosophy of changing the world

Column: Ted Leonsis on bringing sports betting out of the shadows

The next blow for businesses: Tax hikes that threaten more layoffs

‘I view it as propaganda’: Trump’s food box letters create problems in run-up to election

A Journey into the Heart of America’s Voting Paranoia

The independent candidate who could decide the Senate

If Prince Harry can acknowledge his white privilege, why can't everyone else?

Donald Trump Jr. Gets Instant Fact-Check After Most Brazen Coronavirus Lie Yet

Tokyo Olympics to give refunds to ticket buyers in Japan

5 essential aspects for a winning venture

‘Enough Of The Lies’: Joe Biden Is Done With Donald Trump’s COVID-19 BS In New Ad

Eric Trump Gets Taken To School Over Economic Growth Boast

As Anonymous admits lying, will the vitriol rage on after the election?

How Heidi Klum Became the Queen of Halloween

A Meet-Cute at Church and Lots of Sex: Inside Ashley Graham's Spicy Marriage

NBA Draft: Timberwolves, who pick No. 1, meet with LaMelo Ball

Hurricane Zeta Leaves Death And Destruction In Its Wake

49ers preparing for rare silence in Seattle without fans

Do Not Score! How to avoid touchdowns defenses celebrate

West Virginia voters laud Trump for trying to save coal

Marathi controversy: Kumar Sanu lashes out at son Jaan, says 'What has his mother taught him'

Rescuers in Vietnam Search for Dozens Missing after Deadly Landslides