Emeritus Pope Benedict XVI has fallen ill after his return from a trip to his native Bavaria to visit his brother, who died a month ago, a German newspaper reported Monday.

The daily Passauer Neue Presse quoted Peter Seewald, a biographer of the retired pontiff, as saying that the 93-year-old has been suffering from a facial infection since his return to Rome. 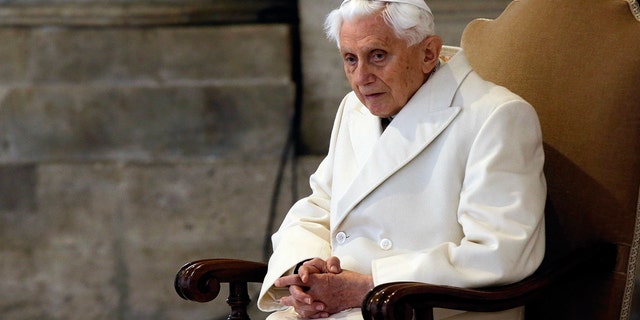 Dec. 8, 2015: Pope Emeritus Benedict XVI attends a Mass prior to the opening of the Holy Door of St. Peter's Basilica, formally starting the Jubilee of Mercy, at the Vatican. Emeritus Pope Benedict XVI has fallen ill after his return from a trip to his native Bavaria to visit his brother, who died a month ago, a German newspaper reported Monday. (AP Photo/Gregorio Borgia)

Seewald, who has published several book-length interviews with Benedict, handed over a copy of the biography to the former pontiff on Saturday, the newspaper reported. He described Benedict as being optimistic and talking about possibly writing himself if his strength picks up, though he said that Benedict is physically very frail.

In June, Benedict made a four-day visit to the Bavarian city of Regensburg to see his ailing brother. It was his first trip out of Italy since he resigned as pope in 2013. The Rev. Georg Ratzinger died on July 1 at age 96.

Benedict has lived at a monastery in Vatican City since shortly after his retirement. Elected to the papacy in 2005 to succeed St. John Paul II, the former Joseph Ratzinger was the first pontiff in 600 years to resign the post.

He was succeeded by Pope Francis.

Rostov will reject the offer of Genoa for Shomurodov, as they want more than 8 million euros (SE)
Mendes earned about 20 million euros during the summer transfer window
Carragher on Arsenal: Liverpool are a few years ahead, but Arteta can take them to the Champions League
Roma is the favorite in the fight for Jovic. Real Madrid have offers from Inter and Milan
Ruben Dias has arrived in Manchester to complete his move to city
Van Dijk's transfers are the key to Liverpool's victory. They killed any attempts of Arsenal to press
Tony Adams: Leno is not a top-4 goalie. For me, Martinez was number one
Source https://www.foxnews.com/world/emeritus-pope-benedict-falls-ill-after-return-from-visiting-late-brother-in-germany

Teacher sentenced to death for poisoning kids with nitrite-laced porridge

Trump and Biden To Meet in Pivotal First Presidential Debate

Private jets are more accessible than ever. Here's how to hire one

One Million COVID-19 Deaths ‘a Very Sad Milestone’, but Virus Suppressible: WHO

Where Trump and Biden stand on 9 major policy issues

What you need to know about coronavirus on Tuesday, September 29

Leo Terrell: Can Joe Biden still win back my vote?

Twin girls struck on I-70 near Hagerstown, 1 killed