Hot and dry conditions pushed portions of Arizona, southern Nevada and Southern California either into drought or further into drought, data from the U.S. Drought monitor show.

Northern California remained about the same, which is to say either in moderate or severe drought, with an area of extreme drought mostly confined to Siskiyou County up on the Oregon border.

The North American Monsoon, which provides about half of the annual rainfall in parts of the Southwest, has been a “nonsoon” this year.

“We thought last year’s monsoon season was rough,” said Rob Howlett of the National Weather Service office in Tucson, “but this year’s is worse.”

July and early August are the peak of the monsoon season. Normal rainfall for July in Tucson is 2.25 inches. In 2019, Tucson got 1.07 inches in July, but this year it got only 0.46 inches. Last year’s monsoon season total was about an inch less than normal. So far, this year is even drier.

The National Oceanic and Atmospheric Administration’s outlook for August is bleak. It favors below-average precipitation in Arizona and the Four Corners region.

During the summer, a strong ridge of high pressure over the northern Pacific has been forcing the jet stream farther inland over the Intermountain West, Howlett explained. “This has a cascading effect, because it then forces our monsoon ridge farther south.” 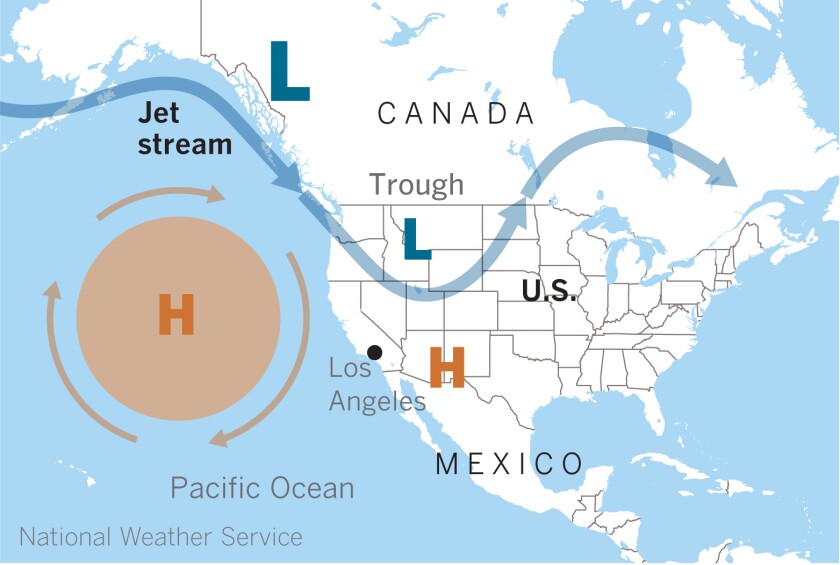 The 2020 monsoon in the Southwest has been hampered by the weather pattern in June and July.

Under normal summer conditions, a high-pressure system develops over the Mexican Plateau and shifts northward into the U.S. southern Rockies or southern Plains by early July. Mid- and upper-level moisture is transported into Arizona and the Southwest from the Gulf of California and the Gulf of Mexico.

But many times this summer, said Howlett, the high has been centered directly over Arizona, producing excessive heat. July was the hottest month on record for Tucson, he said.

July in Tucson was also the 10th driest on record, according to the National Weather Service, with the second-latest start of the monsoon season.

The location of the high-pressure ridge suppressed thunderstorm development. “We really depend on that ridge being farther north so we can tap into the southeast and east winds,” Howlett said.

The jet stream’s position in June and July fed dry westerly flow across Southern California and into the Southwest, keeping tropical moisture to the south and east.

NOAA’s three-month outlook in the Southwest calls for equal chances of above- or below-normal precipitation. That could mean an active September and October, which usually is linked to tropical moisture sources, Howlett points out. “We’ll see how that shakes out.”

“The wild card as we move into late August and September is the latest prediction of an extremely active Atlantic hurricane season,” said climatologist Bill Patzert.

The updated forecast released by Colorado State University on Aug. 5 calls for 24 named storms — twice the average — of which 12 will become hurricanes. Five are expected to be major hurricanes.

Chelsea loaned Barkley to Aston Villa
Mourinho on the exchange with Lampard: just expressed the opinion of the old coach to a young colleague. Be calm when the team wins
The Premier League was spooked by chaos with a penalty for playing with his hand (6 for 3 rounds). The judges were asked to take into account the context - proximity to the opponent and the position of the hands
Bayern midfielder kuizans will be examined in Leeds today, the transfer amount is 20 million euros
Bayern can sign Lemar from Atletico
Kolasinac will move to Bayer from Arsenal for 11 million euros + bonuses (Fabrizio Romano)
Dyer called the toilet the best player of the match between Tottenham and Chelsea
Source https://www.latimes.com/california/story/2020-08-08/drought-continues-to-expand-as-the-monsoon-in-the-southwest-has-been-largely-a-no-show