Dozens of Christopher Columbus statues have been removed since June

At least 33 Christopher Columbus statues have been taken down or in the process of being removed since the renewed Black Lives Matter protests began in late spring, according to a count of local reports. Seeing them come down has been meaningful for Jorge Baracutei Estevez, the cacike, or chief, of the Higuayagua Taíno, a cultural group dedicated to the rescue of Taino culture and language.

"For [the statues] coming down, it's almost like a weight off my chest because it's like a validation," he told CBS News.

Protests have targeted Columbus because he is accused of the genocide of indigenous people. A 2019 study published in the journal Quaternary Science Review estimated that between 1492 and 1600, about 55 million people in the Americas died. The Taíno people were virtually wiped out in the decades after Columbus first arrived on the island of Hispaniola, where Haiti and the Dominican Republic sit today.

Estevez, who is now a curator for the Smithsonian Museum in Washington, said the memorials to Columbus are a painful reminder of that.

"I had never seen a Columbus statue, but when I first did, all that understanding of the atrocities that was committed, it's right there in front of you," he said. "Like, 'This is me, I'm the one who did it. And I get a statue.'" 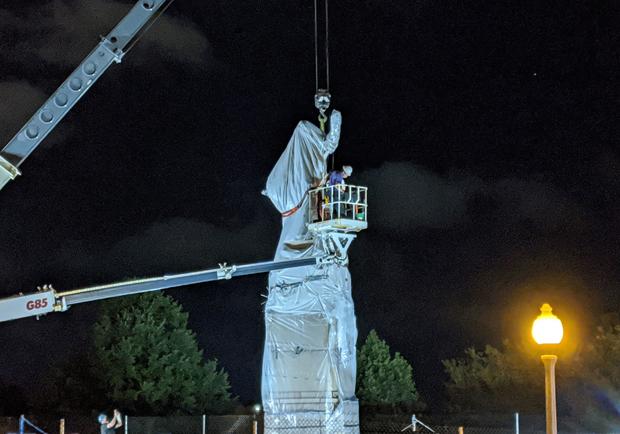 A statue of Christopher Columbus at Grant Park in Chicago is removed early on July 24, 2020. DEREK R. HENKLE/AFP/Getty Images

Since June, statues of Columbus have been either toppled by protesters, voted to be removed or stored away to avoid vandalism, with their futures being decided. On Wednesday, Pittsburgh became the latest city to vote in favor of removing the Columbus statue.

After George Floyd, a 46-year-old Black man, was killed in police custody in Minneapolis on May 25, protests flooded the country and forced America to reckon with its past. Many protesters across the country flocked to local statues, demanding their removal and in some cases taking them down themselves. Almost 60 Confederate monuments have been removed, relocated and renamed since Floyd's death, according to the Southern Poverty Law Center. The conversation on dismantling symbols is featured in the CBSN Originals documentary, "Speaking Frankly: Symbolic Justice," which premieres on Sunday on CBSN.

Columbus is a figure whose worthiness of a statue and a namesake holiday has been repeatedly questioned, even before the protests. Columbus, whose voyage to the Americas was commissioned by Spain, was accused of genocide and carried out the enslavement of natives.

Andrés Reséndez, author of "The Other Slavery: The Uncovered Story of Indian Enslavement in America," told CBS News that the "main game changer" was the discovery of gold on Hispaniola.

"Hispaniola happened to have the largest gold deposits anywhere in the Caribbean region and so, the Native population was put to work," said Reséndez, a professor at the University of California, Davis.

He said Columbus began to form an enterprise centered on the slavery of indigenous people. Columbus forced natives into mining gold, Brazilwood, pearls and other resources –  a practice that was adopted by other colonizers after him. Reséndez estimated between 2.5 and 5 million natives were enslaved throughout the Americas from 1492 to the 19th century. 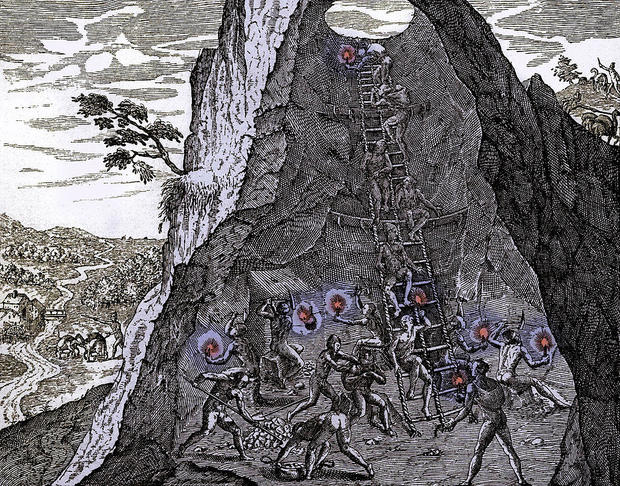 The explorers also brought virgin-soil epidemics such as smallpox to the Americas. Slavery combined with the epidemics turned into a "terrible circle," Resendez said, that killed millions of natives from disease or violence.

"It was not the Spanish crown's intention to cause wholesale genocide in the Caribbean, for example, which was the outcome, but that was not the intention," Reséndez said. "They rather wanted to extract value from them, exploit them."

For many Italian-Americans, Columbus represents a different legacy. Andre' Dimino, director of the Italian American One Voice Coalition, said Columbus became a symbol of pride after Italians came to the U.S. in the late 1800s and experienced discrimination. He cited one of the largest single-day lynchings in the country happened in New Orleans in 1891, when 11 Italian Americans were killed.

"After that, as part of an atonement or an apology to Italian Americans, they erected statues and held celebrations for Columbus Day," Dimino said. 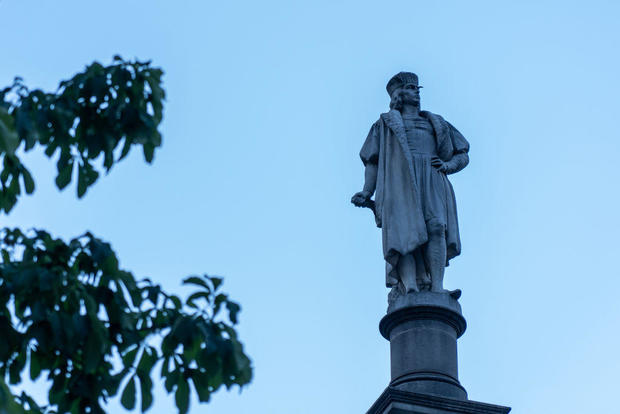 A view of the Christopher Columbus statue at Columbus Circle in New York City.  SOPA Images

Among the most prominent monuments dedicated to Columbus sits in Manhattan's Columbus Circle. In June, New York Governor Andrew Cuomo, who is Italian American himself, said he intends to keep it there.

"I understand the feelings about Christopher Columbus and some of his acts which nobody would support," he said at a briefing. "But the statue has come to represent and signify appreciation for the Italian American contribution to New York. So, for that reason I support it."

WATCH: New York’s Governor Andrew Cuomo says he supports a statue of Christopher Columbus in New York City, saying it “has come to represent and signify appreciation for the Italian American contribution” to the state. https://t.co/0zECxws95h pic.twitter.com/hF0H3SWSxE

CBS News reached out to Cuomo's office to see if his position changed as Columbus Day – which many now refer to as Indigenous People's Day – nears, but did not receive a response.

For Estevez, who has fought his entire life for the recognition of the Taíno, the statues that continue to stand are a stark reminder of the consequences his tribe suffered as a result of him.

Arsenal will exclude Ozil and Sokratis from the Premier League bid
Bartomeu will miss the match against Ferencvaros due to a relative's covid. Barca President wants to get to the game with Real Madrid
Liverpool and Manchester United are among the clubs in talks to create a European Premier League
Thibaut Courtois: real want to win the Champions League and La Liga
Tiago and Matip didn't train with Liverpool today. They will probably not play Ajax
Griezmann will not return to Atletico from Barcelona
Miranchuk was included in Atalanta's bid for the Champions League match with Midtjylland
Source https://www.cbsnews.com/news/christopher-columbus-statue-removed-cities/

The world's longest flight is back -- and now it's even longer

This car just smashed through speed records at 316 mph

Jennifer Garner Still Having A Baby With Ex-Boyfriend Jon Miller?

Jeffrey Toobin suspended from New Yorker, on leave from CNN, after he said he accidentally exposed himself on Zoom call

If Democrats Can, Should They Pack US Supreme Court?

US home construction up 1.9% in September to 1.4 million

Department of Justice to sue Google for antitrust violation

Orionid Meteor Shower Should Be Visible From Anywhere On Earth

Ireland is first EU country to return to coronavirus lockdown

Max Scherzer puts McLean home on the market for $15M