A skydiver with two prosthetic legs jumped out of an airplane to carry a huge American flag down to the 80th Sturgis Motorcycle Rally in South Dakota over the weekend.

Sgt. 1st Class Dana Bowman, is a former Special Forces soldier and a member of the Army’s Golden Knights parachute team, which is also how he lost his legs. He suffered the injuries in a mid-air collision during a Golden Knights training incident that left a fellow skydiver dead.

According to the Defense Department, he was the first double-amputee to reenlist.

He has 4,000 jumps under his belt, many of them after the accident, according to Black Hills Fox, a South Dakota station.

He told the outlet he does the jumps to inspire other veterans.

"You know it is so exhilarating to be an inspiration to a lot of them,” he said. “Some are looking for hope. Hope for despondent, courage to the timid, and strength to the weak.” 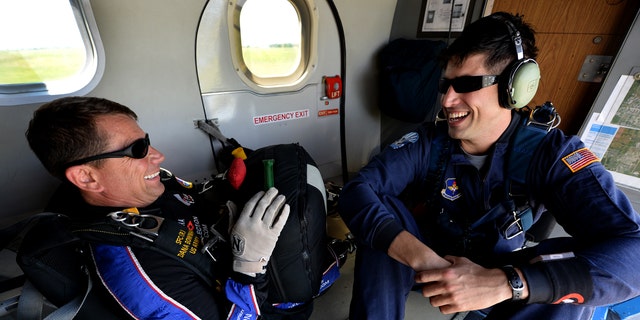 His jump coincided with the arrival of the Sturgis Rally’s Veterans Ride, to help kick off the rally Friday.

The event runs until Aug. 16 and is expected to draw about 250,000 visitors amid the coronavirus pandemic – compared to about 500,000 in an average year. Still, it’s expected to become one of the largest public gatherings since the outbreak began. Local officials scaled back the event, canceling city-hosted aspects and cutting spending on advertisements due to the COVID-19 crisis.

They also plan to conduct mass testing on visitors to get an idea of the virus’ impact on the rally.

Lacazette scored after a mistake by Robertson. The forward has 3 goals in 3 Premier League games
Roy Keane: for Solskjaer, the honeymoon at Manchester United is over, the pressure will grow. Need a trophy
Dembele was late for Barcelona training. Koeman demands to arrive at the base an hour before class
Chris Waddle: I Don't see Manchester City Winning the Premier League this season
Lewandowski and Kuizans laughed at rumors of a conflict in training
Kevin-Prince Boateng signed a contract with Monza Berlusconi until the end of the season
Ex-Manchester United player Raphael: van Gaal is one of the worst people I've worked with. I was told that he doesn't like Brazilians
Source https://www.foxnews.com/us/double-amputee-veteran-skydives-sturgis-rally-us-flag-trump-2020

7 takeaways from the NYT report on Trump's tax returns

A Rare Expansion in Abortion Access Because of COVID-19

How ‘Save the Children’ Is Keeping QAnon Alive

Snap Gets Upgrade, Other Internet Stocks Boosted By Analyst Comparing Them To Software Firms

Trump's taxes tell a tale of debt and desperation

Opinion: Trump's taxes tell a tale of debt and desperation

Former US Ambassador to Ukraine to be honored by PEN America

Beauty brand drops a fresh spin on the toothpaste pimple hack — "I’ve tried a lot of different spot treatments, but this one is the best"

‘Real Time With Bill Maher’ Renewed At HBO Through 2022

5 Things to Avoid on Prime Day

Chiefs vs. Ravens line, prediction: Why Under is the smart bet

Director Joe Mantello Delivers An All-Star ‘The Boys In The Band’ To Netflix & The 21st Century: Here, He Talks How, Why And The Uncanny Instincts Of Producer Ryan Murphy – Q&A

Royals conclude 2020 season with eye on progress of youth

Help! My Outraged Mother Won’t Talk About Anything Other Than Politics.

Will Smith Gives a Tour of The Fresh Prince of Bel-Air Mansion: Go Inside

Oceans are out of balance — and that means stronger storms

Keto diet could be bad for your heart, researchers say

Commentary: We need to talk about those Breonna Taylor T-shirts

Armenia, Azerbaijan clash in separatist region for a 2nd day

Could the presidential race be decided by Nebraska’s second congressional district?

Titans without defensive play-caller due to COVID testing

Fact-Checking Fargo: How Bad Was Anti-Italian Racism in the 1950s?

Which states can see the Northern Lights tonight?

Dozens of California wineries under threat from latest wildfire

Sophia Hutchins and Caitlyn Jenner in talks to join ‘RHOBH’

The Latest: Qualifier in French 2nd round after 6-hour win

Alarming Data Shows a Third Wave of COVID-19 Is About to Hit the U.S.