America must come together at this moment in time to create positive and lasting change within our communities, former Democratic National Committee Chairwoman Donna Brazile urged Thursday.

In an interview on "America's Newsroom" with host Trace Gallagher, the Fox News contributor said that Confederate statues and monuments – emblematic of the history of the nation's Civil War – are monuments to hate in a "bygone era."

Weeks of nationwide protests over police brutality following the death George Floyd have led to a national debate over the depiction of certain historical monuments, the Confederate flag and brands such as Aunt Jemima.

On Wednesday, Richmond, Va. Mayor Levar Stoney ordered the removal of all Confederate statues that sit on city land, invoking emergency powers to quicken the process. 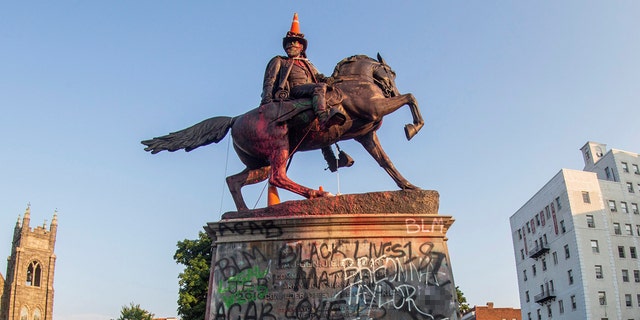 Traffic cones and a rope remained on the statue of Confederate General J.E.B. Stuart the morning after protesters against racial inequality attempted to topple it in Richmond, Va., June 22, 2020. (REUTERS/Jay Paul)

"Well, as a descendant of slaves, and on…my maternal side from the state of Virginia, these symbols – as you well know – did not spring up in the immediate aftermath of the Civil War. But, they came up during the centennial of the Civil War," Brazile explained. "They are monuments of a bygone era."

"You have to ask yourself one question," she directed viewers. "Are these the values that we hope to share in the 21st century? Some of these monuments are, as I often refer to them, monuments of hate."

Brazile said she believes a public discussion is necessary, noting that her city of New Orleans decided to put a statue of Confederate Gen. Robert E. Lee in a museum.

"Who are we as a country? What are our values?" she asked. "Equal justice under the law should apply to all Americans. But I do believe we should do it in a peaceful way. A way that helps us transcend some of the bitter past so that we can together walk into this brighter future understanding that these monuments were erected as a symbol of a bygone era."

"And let us now find this so-called moment to bring the country together and not further tear us apart," added Brazile.

Brazile recalled how her father had served in the United States' first integrated unit — earning four bronze stars during the Korea War and a U.N. medal for valor. Upon his return, however, she said his patriotism and service were not recognized because of the color of his skin.

"Give us an opportunity today to allow every American – regardless of race, regardless of background – to celebrate what and who we are," she pleaded, reacting to calls for military bases named for members of the Confederacy to be changed. "And, not continue to ... inject that past of pain into our system."

Against sentiment in his own party, President Trump has vowed to veto a massive defense bill to keep bases – like Fort Bragg – named after Confederate officers.

"I think that this is that moment when we can not be divided, but really come together," Brazile concluded.

Lampard wants Chelsea to buy Chilwell, a new goalkeeper and at least one Central defender
Barcelona wants to increase Fati's compensation to 400 million euros
Inter agreed with Manchester United to transfer Sanchez for 15 million euros. It will be announced after the match with Getafe
Alisson: Klopp is a passionate guy, he wants to win and make Liverpool even greater
Borussia Director on the words of Hennessy: it Sounds arrogant. If you have 250 million euros more, it's easy to be carefree
Varan about the match with city: the Outcome of the best games in the Champions League is decided in small episodes. That's why we love it
Pochettino is the main candidate for the post of Barca coach. Setien can be sacked if the club does not win the Champions League
Source https://www.foxnews.com/media/donna-brazile-ameria-confederate-statues-monuments-positive-change?utm_source=feedburner&utm_medium=feed&utm_campaign=Feed%3A+foxnews%2Fmost-popular+%28Internal+-+Most+Popular+Content%29

Apple Fire spreads in California with less than 5 percent contained

Celebrity birthdays for the week of Aug. 9-15

Pandemic enters new phase in US as Trump plays golf

Lucky No.7: Taylor Swift nabs 7th No.1 album with 'folklore'

Review: A powerful climate novel reminds us that people are animals too

The United States Is Reopening Many of the Wrong Schools