It was not so long ago that the conventional wisdom in Washington was that a genuine crisis like the Sept. 11, 2001, attacks had the power to cool partisan hostilities, pulling elected officials together to present a united front to a stricken nation. In a pandemic that has now claimed more than 100,000 lives, that is not proving to be the case.

House Republicans marked the grim milestone this week by filing a lawsuit against Speaker Nancy Pelosi, accusing Democrats of a pandemic-enabled, unconstitutional power grab when they instituted proxy voting so that some lawmakers could avoid travel to Washington during the coronavirus outbreak. It was one more partisan fight in a toxic political environment fraught with personal insults, institutional shaming and constant accusations of putting party over the nation’s well-being in efforts to stir the passions of one voting bloc or another.

“Partisanship seems to continue to escalate in spite of the crisis,” said Tom Daschle, who as a Democratic senator from South Dakota, was the Senate majority leader during the Sept. 11 attacks and their immediate aftermath. “It is the worst I have seen it in my lifetime. And there is no end in sight.”

After the Sept. 11 attacks, stunned members of Congress and the Bush administration immediately toned down their usual back-and-forth and pulled together for months behind a variety of antiterrorism initiatives. Republicans and Democrats crowded together on the steps of the Capitol to sing “God Bless America,” and President George W. Bush told his top aides that “politics has no role in this. Don’t talk to me about politics for a while.”

Compare that to today. With a crucial election looming, intense politics and outright hostility are inescapable elements of the debate surrounding what Washington will do to address the pandemic and the attendant economic collapse — and even how and when to do it.

The tone was set by President Trump in February, when he initially dismissed Democrats’ concerns about the coronavirus as their “new hoax” meant to hurt him politically. As debates over wearing masks and reopening the country have taken on a partisan tinge, Republicans in Congress have followed the president’s lead, portraying Democrats as eager to wring political advantage from the crisis and unwilling to do the hard work required to confront it. Democrats, in turn, have savaged Republicans, accusing them of being reckless in the face of a public health crisis and enabling a president who has botched the response.

Feuding Democrats and Republicans have moved beyond their usual bitter policy disputes into challenging the very legitimacy of the way that Congress does business, setting up an extended struggle over any legislation lawmakers do manage to pass as the coronavirus continues to spread and states and businesses struggle to determine how to reopen safely.

Now, the Republican-controlled Senate and Democratic-controlled House are quarreling over not just the substance of what the other chamber produces, but also the very process for producing it, taking the partisan divide to a whole new level.

Senator Mitch McConnell, Republican of Kentucky and the majority leader, has already suggested the new House voting system that allows absent members to let others record their votes could invalidate any legislation approved there. He said he might not be willing to take up bills passed under the new system. Representative Steny H. Hoyer, Democrat of Maryland and the majority leader, shot back that the Senate constantly engaged in a form of proxy voting by allowing bills to pass with most senators absent as long as no one objected.

“They have one person in the chair and one person on the floor,” Mr. Hoyer said. “They call it unanimous consent, but what that means is two people are voting for the 100.”

House Republicans have seized on the proxy voting as a way to try to delegitimize Democratic initiatives and charge that Democrats have abandoned their posts and aren’t up to the job — a theme they will play out in their uphill fight to regain the majority in November. They regularly cite provisions of the Constitution requiring Congress to assemble. But they typically leave out the most relevant clause, the one declaring that “each House may determine the rules of its proceedings.”

House Democrats say that they are well within their rights, and that proxy voting is a way to ensure the health of members and staff aides while still conducting business without diluting the voting power of individuals who may be anxious about traveling to Washington, or unable to do so. 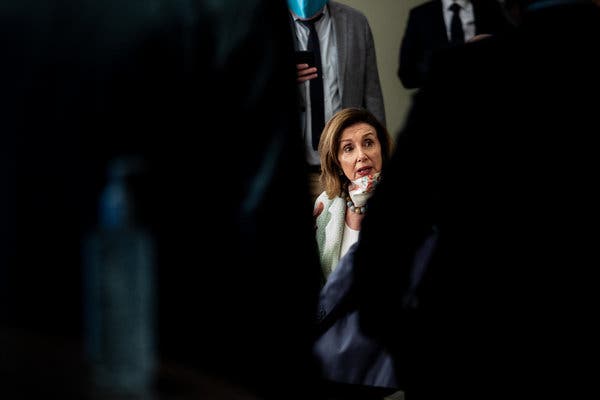 Speaker Nancy Pelosi has not been shy about criticizing President Trump or her Republican colleagues.Credit...Erin Schaff/The New York Times

But that wasn’t dissuading Republicans, who continue to blister Democrats for breaking both the letter and the spirit of the Constitution by refusing to show up for work as millions of other Americans must do in difficult conditions.

“We believe we are essential,” Representative Kevin McCarthy of California, the Republican leader, said Thursday. “Just as all those Americans out there are doing their essential work as well, the doctors, delivery drivers, dispatchers. Unfortunately, Democrats believe differently.”

Republicans in the House and Senate have taken to characterizing Democrats either as cowards unwilling to take the same risks that others whose presence is required must or as shirkers.

“Mailing it in while the rest of America is safely reopening and going back to work,” Senator John Cornyn, Republican of Texas, said on Twitter on Wednesday, suggesting Ms. Pelosi was “vote harvesting” — the process of collecting election ballots to submit en masse that Republicans say can amount to fraud.

Democrats have harshly criticized Republicans for moving much too slowly on another phase of pandemic rescue legislation, after both the White House and Mr. McConnell said Congress needed to “pause” to assess how the nearly $2.8 trillion already approved was working.

“Shame on him,” Senator Chuck Schumer of New York, the Democratic leader, said Wednesday, condemning Mr. McConnell’s comment earlier in the week that more aid might be coming in a month or so.

“We need to pause?” Ms. Pelosi asked angrily at her news conference on Thursday. “Tell that to the virus.”

Ms. Pelosi herself has not been shy about throwing daggers, goading Mr. Trump by calling him “morbidly obese” while saying he was in a high-risk health group — fully aware it would get under his skin. She also said he acted like a child who came home with “doggy doo” on his shoes. Mr. Trump has called her a “waste of time” and a “sick woman” with a lot of “mental problems.” None of this would seem conducive to establishing a working relationship between two of the central figures in determining the continuing federal response to the pandemic, though they will have to come to terms at some point.

Mr. McConnell, another central player, has a different take on the partisan environment, noting this week in an appearance in Kentucky that the most significant legislation passed so far, the $2.2 billion stimulus bill adopted in late March, was not opposed by a single member of the House or Senate.

“I was proud of the Congress,” he said during a visit to thank health care workers. “I think going from an impeachment to a multitrillion-dollar rescue package without dissent was clearly an example of coming together.”

But that effort was ugly as well, as Democrats held out for more concessions and complained that Republicans were trying to jam an inadequate measure down their throats. Republicans, in turn, accused Democrats of costing American lives by delaying its passage.

Even after the Sept. 11 attacks, the partisan truce was only temporary. By early 2002, the Bush administration was moving back into campaign mode and beginning to talk about how Republicans were the party to be trusted to combat terrorism, and portraying Democrats as weak on the issue. Republicans ended up gaining seats in the House and Senate, defying the tradition of a president losing seats in the midterm.

Pressed on Thursday about Mr. Trump’s handling of the crisis, Mr. McCarthy bristled. “Stop playing politics with this, and let’s save more lives,” he said.

But based on what has transpired in recent weeks and with the election drawing nearer, it appears politics not only won’t be stopped, but will also continue to be played at the highest levels.

Kike Setien: Griezmann played a great match, understood Messi well, scored a great goal. We changed something
Barca President on the Real Madrid match: VAR always favours one team. I have an unpleasant feeling
Faty scored the 9,000 th goal in the history of Barcelona
Griezmann scored in La Liga for the first time since February with a pass from Messi
Suarez came out on the 3rd place in the list of the best Barca Goalscorers in history
Guardiola lost 3 away games in a row in the League for the first time in his career
About Lautaro Marotta: He has not shown the slightest desire to leave
Source https://www.nytimes.com/2020/05/28/us/coronavirus-political-unity-crisis.html

Woman who made racist remarks in video faces separate charge