Did Meghan and Harry buy in Montecito? Sources point to $14.65-million estate

Meghan and Harry have quietly moved up the coast, buying a home in the Santa Barbara area, sources told The Times.

Prince Harry and the former Meghan Markle have purchased a home in the heart of Montecito, according to people familiar with the matter who weren’t authorized to speak publicly.

Tabloids first reported that the Duke and Duchess of Sussex were relocating to the exclusive, celebrity-filled coastal community tucked between the Pacific Ocean and the Santa Ynez Mountains — but offered few details.

Area real estate agents point to a $14.65-million estate, which closed in an off-market sale in June. Tax records for the 7-acre property, which was listed last year for $34 million, match limited liability companies previously created by the Duchess of Sussex, according to records obtained by The Times. 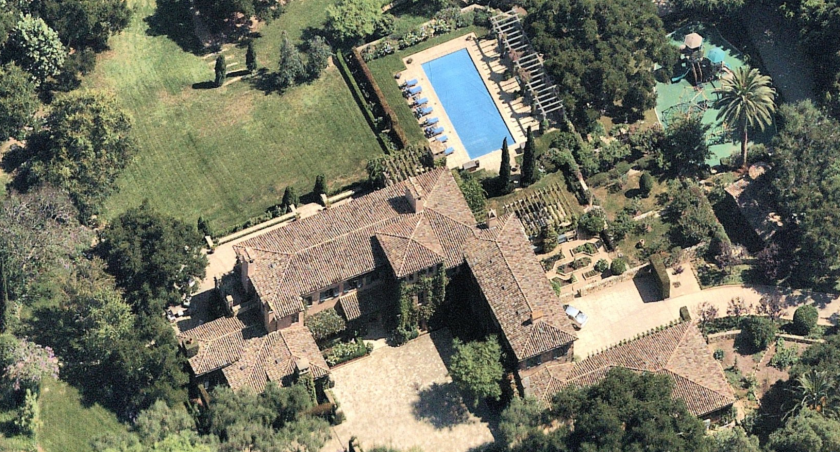 The 7-acre estate, which is fenced and gated, holds a guesthouse, a swimming pool, a tennis court, gardens and a playground.

Built in 2003, the sprawling estate is hedged and gated from the street and reached by a winding drive paved with hand-cut, locally sourced stone. Beyond the vine-covered entry is a coffered-ceiling living room, a billiards/game room, a home theater, spa facilities, an elevator and a gym.

There are nine bedrooms in the roughly 14,500-square-foot main house. A two-bedroom guesthouse, a teahouse, a tennis court, a swimming pool and a custom jungle gym are among amenities on-site.

The seller was a limited liability company tied to Russian investor Sergey Grishin, records show. Grishin is the former owner of another Montecito mansion, the so-called Scarface estate.

The move wraps up a yearlong saga for the royal couple, which kicked off in January when the pair announced they would “step back as ‘senior’ members of the royal family and become financially independent.”

Vowing to split time between Britain and North America, they cited space to raise their son Archie, who was born in May 2019, as a primary reason for the highly scrutinized move.

They spent the first few months of the year on Vancouver Island, Canada, reportedly living in a French-inspired mansion worth roughly $14 million, with plans to eventually move to L.A. The coronavirus outbreak accelerated those plans, and in March, they moved temporarily into Tyler Perry’s place in Beverly Hills to quarantine.

Tyler Perry’s Beverly Hills estate, where Meghan and Prince Harry were staying, has more than 24,000 square feet of living space.

However, the retreat didn’t bring the privacy they were hoping for. In July, Harry and Meghan filed a harassment lawsuit in L.A. County Superior Court, alleging that unnamed paparazzi were flying drones overhead and cutting holes in the fence to photograph their family.

Compared with densely packed L.A., Montecito and the neighboring communities of Santa Barbara and Hope Ranch have long served as a quiet, scenic, spread-out haven for those who can afford it.

Over the years, celebrity residents in the area have included Beach Boys member Mike Love, “Sopranos” star Michael Imperioli and actor Rob Lowe, who put his 3.4-acre estate in Montecito on the market for $47 million in 2018. Jeff Bridges sold his vineyard estate there for $15.9 million in 2017, and this summer, Ellen DeGeneres sold an English Tudor-style house to pop star Ariana Grande for $6.75 million.

Oprah is perhaps the area’s most famous owner. She dropped $50 million on a 42-acre spread known as the “Promised Land” in 2001 and has since been snatching up properties across the community, including a nearby horse farm that she bought at auction for $28.95 million in 2015.

Jose Mourinho: what happened to Dyer is not normal, he was dehydrated. If the League management doesn't care about the players, I don't
Jose went berserk twice during the match with Chelsea: ran over Lampard and ran to look for Dyer - he rushed to the toilet right during the game
Lampard on relegation from the League Cup: we Need to keep a positive attitude. Everything will come if Chelsea score second, leading the score
Call of nature, what can you do? Dyer explained why he ran to the dressing room during the match with Chelsea
Mourinho and Lampard shook hands before the penalty shootout. In the first half, they had a fight
Dest arrived in Spain to complete a transfer to Barca
Lionel Messi: I Am responsible for my mistakes. I wanted Barcelona to become stronger
Source https://www.latimes.com/business/real-estate/story/2020-08-12/prince-harry-meghan-markle-buy-montecito-estate

‘Lost In Space’: Russell Hornsby To Recur In Third Season Of Netflix Series

First presidential debate 'is about how Joe Biden shows up' and performs, Bret Baier says

Trump requests he and Biden be checked for earpieces before debate

Tim Murtaugh: Presidential debate reminder -- Biden is a skilled debater. It's his record that's a failure

Washington boosts support for Greece in spat with Turkey

Rangers buying out Henrik Lundqvist in bittersweet end of an era

Matt Drudge rumored to be seeking investors for Drudge Report

COVID-19 cases rising among US adolescents

Breonna Taylor’s Black neighbor questions exclusion from indictment: ‘I’m a human being too’

A pregame guide to zingers, tells and expectations in the first US presidential debate

The 'Meanwhile in America' pregame guide to zingers, tells and expectations in the first presidential debate

Trump, Biden do walk-throughs ahead of first presidential debate

‘Almost as round as it is long’: National Zoo’s panda cub is getting so plump

Jill Biden shuts down question about husband's gaffes: 'You can't even go there'

Ready for 'The Mandalorian' Season 2? Now you can watch it with Lego Baby Yoda

Disney Lays Off a Quarter of U.S. Theme Park Workers

Texas cheerleader targeted by 10 students who led officers to swarm her dorm with guns, family says

WATCH: What to watch for during the 1st presidential debate l FiveThirtyEight

Michael Flynn's attorney asked Trump to hold off on pardon

Zendaya In Talks To Play Ronnie Spector In A24 Film About Iconic Singer; Label Acquires Life Rights & ‘Be My Baby’ Autobiography

'Borat' sequel to be released by Amazon before election

What Time Will ‘The Boys in the Band’ Be on Netflix?

2020’s First Presidential Debate: Time, how to watch, and what to expect

The Apple Watch SE may just be the best option yet, with a few compromises

Fact check: 10 false or misleading claims Biden and Trump make about each other

Nearly 3 Years Since The Me Too Reckoning, Progress Has Been Slow, Reports Find

Disney To Lay Off 28,000 Workers From Disneyland, Disney World

For Yosemite day-trippers, it's no reservation, no problem as of Nov. 1

With Friendly Visits to Republicans, Barrett Makes Her Capitol Debut