Hi. Welcome to On Politics, your guide to the day in national politics. I’m Nick Corasaniti, your host on Tuesdays for our coverage of all things media and messaging.

Sign up here to get On Politics in your inbox every weekday. 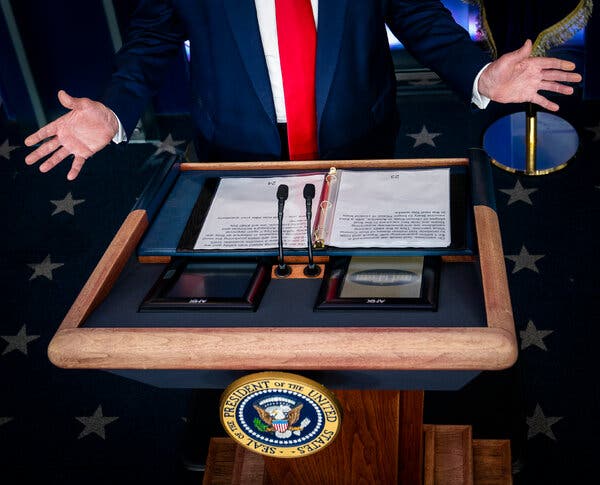 For six days last week, there was not a single Trump campaign ad on any television across the country. While it was an unusual time to go completely dark on the TV airwaves, with less than 100 days left in the election, the Trump team said it was part of a necessary review by its new campaign manager, Bill Stepien, who took the reins in mid-July.

What returned on Monday was a more streamlined ad campaign in four battleground states: North Carolina, Georgia, Florida and Arizona.

Why those four? Early voting.

Though campaigns have always made an extra effort to advertise in states that start voting earlier in the calendar, the pace of early voting this year is expected to accelerate exponentially amid the coronavirus pandemic. As a safer method of voting compared with showing up at crowded Election Day polling locations, early voting — both in-person and through mail-in ballots — has set records in nearly every primary election since March.

For the general election, North Carolina, Georgia, Florida and Arizona are some of the earliest states to begin voting, with Georgia and Arizona starting as soon as the first week of October. Because many are expected to cast early ballots, what was once a low drum beat of August political advertising is likely to grow into a more cacophonous cascade of ads in early states.

With its new advertising strategy, the Trump campaign is returning to an older message: fighting the threat of “socialism.” Gone are the scattershot attacks on Joseph R. Biden Jr.’s relationship with China, or his age, or his position on defunding the police. Returning in one of President Trump’s new ads are the familiar faces of Republican boogeymen and women like Senator Bernie Sanders of Vermont and Representative Alexandria Ocasio-Cortez of New York, as the Trump campaign attempts to paint Mr. Biden as beholden to the far-left of his party.

If that feels familiar, it is: The Trump campaign ran an extensive ad campaign during the impeachment process, often casting it as a far-left conspiracy, with television and digital ads full of imagery of prominent progressive figures like Mr. Sanders, Ms. Ocasio-Cortez and Representative Ilhan Omar of Minnesota.

The new ad, which also features familiar hard-line immigration positions, appears to be a recognition that the previous attempts to define Mr. Biden had largely failed. The Trump campaign had spent more than $30 million in attack ads that mischaracterized Mr. Biden’s position on defunding the police, but the former vice president continued to climb in key battleground state polling.

Of course, just as notable are the early states the Trump campaign is not targeting in this initial return to the airwaves.

The campaign continues to stay off the air in Michigan, a state Mr. Trump won by less than 11,000 votes against Hillary Clinton in 2016 but where he has trailed Mr. Biden in most statewide polls. Michigan votes in mid-September.

Trump ads are also off the air in Pennsylvania, a state he won by less than 45,000 votes in 2016. But there, Mr. Biden is also leading, according to recent polling. Though Pennsylvania does not have expansive in-person early voting, a new law allows voters in some counties to request a mail-in ballot as early as mid-September.

And while the Trump campaign has publicly claimed Minnesota as competitive — a state that Mr. Trump lost by just 44,000 votes in 2016 but hasn’t voted for a Republican presidential candidate since 1972 — it is not currently going back on air in the state, which also starts voting in mid-September.

We want to hear from our readers. Have a question? We’ll try to answer it. Have a comment? We’re all ears. Email us at [email protected].

Ad of the week: Meddling in Kansas?

The ads of a mysterious new super PAC called Sunflower State first appeared on television screens in Kansas in mid-July, with a message assailing Representative Roger Marshall, one of the Republican candidates for Senate in Kansas, as it offered backhanded compliments to one of his opponents in the primary, Kris Kobach, the former Kansas secretary of state.

Over the past three weeks, Sunflower State has run $2.5 million worth of television ads attacking Mr. Marshall, according to Advertising Analytics, an ad tracking firm. Little is known about the group, though what is publicly available links it to Democrats: It uses the same advertising buyer as a pro-Biden super PAC, and it shares the same bank as Senate Majority PAC, another top Democratic group.

The message: After Mr. Trump popularized derision of Washington insiderdom as “the swamp,” the phrase quickly became a common tagline for conservatives who wanted to attack mainstream Democrats. In this ad, the phrase is weaponized against Mr. Marshall, a two-term congressman, along with other clichéd takedowns like “special-interest lover.”

For Mr. Kobach, the praise is short but effusive: “the pro-Trump conservative leader.”

The takeaway: Democratic strategists have argued that if Mr. Kobach, who led Mr. Trump’s ill-fated election integrity commission and lost the 2018 governor’s race to a Democrat, wins the primary today, the normally deeply red Kansas Senate seat could flip.

So while the Democratic-linked Sunflower State won’t run a full-on pro-Kobach ad, it has no issue running anti-Marshall ads, a politician it clearly disagrees with. It’s a tactic known as meddling, when a group linked to one party runs ads in the other party’s primary in an attempt to help a preferred candidate win. Of course, it could backfire — Mr. Trump won Kansas by more than 20 percentage points in 2016 — and the $2.5 million the super PAC spent to help elect Mr. Kobach could become a six-year black eye for Democrats.

Thanks for reading. On Politics is your guide to the political news cycle, delivering clarity from the chaos.

On Politics is also available as a newsletter. Sign up here to get it delivered to your inbox.

Is there anything you think we’re missing? Anything you want to see more of? We’d love to hear from you. Email us at [email protected].

Aaron Ramsay: Under Pirlo, Juve players have more fun
Aubameyang on the decision to stay at Arsenal: Arteta is a key factor. He said: You can create a legacy here
You will get high from Rostov's goal as from your favorite song. Shomurodov from the fly in touch closed a crazy pass Normann 40 meters
Valery Karpin: Maccabi is a playing, pressing team. It is very dangerous to let her do everything
Barcelona will make one last attempt to sign Lautaro
Lingard's agents are in talks with clubs from England and Europe
Boateng said he dyed his hair purple because he lost an argument to a friend
Source https://www.nytimes.com/2020/08/04/us/politics/decoding-the-trump-ad-buy.html

Officials plead for calm amid anger over Breonna Taylor case

‘Lucifer’ Tops Nielsen Streaming Rankings While ‘Cobra Kai’ Punches Up To No. 2 In Netflix Debut

Jets players cast doubt on Adam Gase's coaching abilities: 'We haven’t been as crisp as we should be'

Mary Trump Sues POTUS and His Siblings for Fraud: ‘Fleeced Her of Tens of Millions of Dollars’

Celtics Player Gordon Hayward Misses Birth of Baby No. 4 While in NBA Bubble

No. 22 Army seeks road breakthrough at No. 14 Cincinnati

Crowd jeers as Trump pays respects at court to Ginsburg

Murder hornets could spread across US if unchecked, study warns

Ehlinger has plenty of passing options at No. 8 Texas

Comedian Sebastian Maniscalco Is Turning Zoom Dread on Its Head

Next up for banged-up Jets: ‘Whoever’s got a pulse’

Demi Lovato and fiancé Max Ehrich are headed toward a breakup

‘Helstrom’: Everything You Need to Know about Hulu’s Marvel Horror Show

Why Global Brands Must Prioritize a Localized Experience

Austria to welcome skiers, but dancing on bars is off the menu

Sur La Table is having a massive sale, with cookware up to 40 percent off

Mnuchin and Powell back jobless aid and small business loans

Harold Evans Dies at 92; Crusading Newspaperman With a Second Act

‘Nobody knew how to handle this situation’: How COVID-19 decimated Illinois nursing homes, exposed government flaws and left families in frustrating limbo

This Republican governor refused a mask mandate. Then he got coronavirus.

At UN, China, Russia and US clash over pandemic responses

Donald Kendall, Pepsi’s Chief During the Cola Wars, Dies at 99

Twitter beefs up security after hack led to bitcoin tweets

Facebook’s long-delayed oversight board will launch before US election

Lori Loughlin will have access to Pilates classes, music lessons while serving time for the college admissions scandal

Mary Trump Sues Donald Trump And His Siblings For Fraud