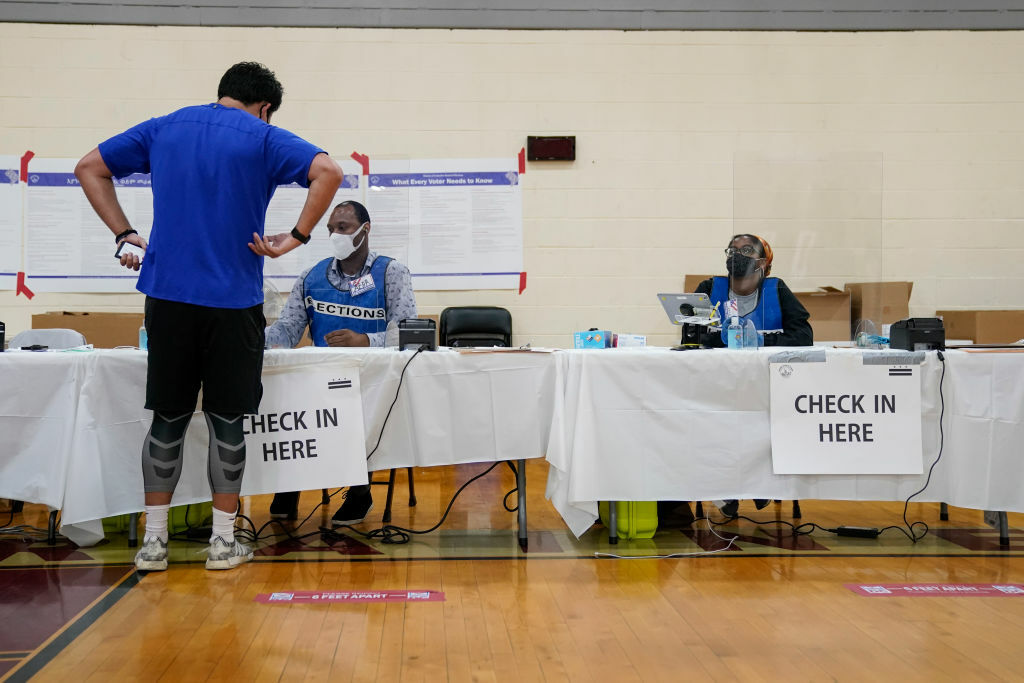 Election officials wear masks and sit behind plastic barriers as they check in voters at McKinley Technology High School on primary election day on June 2, 2020 in Washington, D.C. (Photo by Drew Angerer/Getty Images)

Two longtime members of the D.C. Council will not be taking seats next year after apparently losing in Democratic primary elections on Tuesday.

Jack Evans was skunked in an attempt to regain the Ward 2 seat he held for 28 years before resigning in the middle of the expulsion process late last year after numerous ethics violations. He garnered 293 votes on Tuesday, good for 3.78% and seventh place in an eight-candidate race.

The winner will face Republican Katherine Venice in November.

The D.C. Board of Elections made mail-in voting a point of emphasis this year because of the COVID-19 pandemic, and it’s not known how many mail-in ballots remain to be counted.

The winner will take on the Statehood Green Party’s Perry Redd in November.

Todd has been seen as an ally of D.C. Mayor Muriel Bowser, and while he hasn’t conceded the race, Bowser said at a briefing Wednesday that “It looks like we have a new Democratic nominee in Ward 4.”

“I know Brandon Todd very well; I know the great work that he’s done in Ward 4, and he should be very proud of his service, and I know he will be able to hand off his progress he’s led to the next council member,” she said.

The Board of Elections said that about 90,000 mail-in ballots had been requested, and 50,000 had been counted by the end of the night Tuesday. They needed to be postmarked by Tuesday, so many ballots likely haven’t even been received yet.

Responding to reports of long waits at the 20 in-person voting centers across the District on Tuesday, Bowser said, “D.C. voters spent hours at the polls,” and called the administration of the election “nothing short of failed execution.”

The polls closed at 8 p.m.; anyone who was in line at that time would be able to vote, and voters were exempt from the 7 p.m. curfew (though some reported that the D.C. police told them otherwise). WTOP’s news partner NBC Washington reported that some voters waited until past midnight.

Board of Elections Chairman Michael Bennett reminded NBC Washington that in-person voting centers had been open since May 22, but that there was a “cultural norm to vote on Election Day.”

Many voters, however, told NBC Washington that they simply hadn’t received their mail-in ballots.

Bowser on Wednesday said that while the elections board was an independent entity not run by her administration, and it wouldn’t be appropriate to comment on the specifics of their practices, she added that her administration had offered the board various types of assistance on several occasions over the past few months.

Responding to a question, Bowser said she was “very concerned” about how well the general election in November will be run.

“The confidence of our electorate in how this independent board operates is paramount,” adding that she wants a “download” from Bennett “on what the plan is to fix it.”

Asked whether she might be asking for resignations if November’s election is a fiasco, Bowser said, “I could not tolerate continued failed leadership or execution.”

Bowser wasn’t the only D.C. leader upset with the way the primary was run.

At-large Council member Elissa Silverman said in a statement that 380 voters emailed her on Tuesday saying they hadn’t received absentee ballots and had only just learned that they could have received one by email.

Ward 6 Council Member Charles Allen said via Twitter that he would hold hearings in two weeks “to dig into failures of leadership in this election.”

The men played against the boys. Dublin about the match Manchester City – Liverpool
Liverpool's defeat by Manchester City is the biggest for the Premier League champion since 1998
Liverpool lost for the 2nd time in the 2019/20 Premier League. There was only one defeat last season
Nike is Recalling Barcelona uniforms from stores due to poor quality
When they argue whether any hand in attack should be considered a violation, show this Tottenham goal
Gianluigi Buffon: the Fire inside me is still burning
Gary Lineker: I'm Starting to think that Liverpool was a soap bubble
Source https://wtop.com/dc/2020/06/dc-primaries-long-lines-and-2-new-council-members/

The Kids Are Not All Right

Booker reaches out to unite Democrats against McConnell

Coronavirus continues to spike amid mixed messages from Trump administration

Brussels to Name Public Square in Honor of Brontë Sisters

SAG-AFTRA Orders Members Not To Work On ‘Songbird’, One Of The First Films To Shoot In LA During Pandemic

Bell to commentate and race on same day in different states

Bremen’s Bundesliga future on edge after 0-0 with Heidenheim

Best sprinklers that are safe for children

Texas linebacker Overshown to sit out until ‘changes made’

What We Know About Vanessa Guillen, the Missing Fort Hood Soldier

Ask a Sane Person: David Shimer on the 2020 Election and Russian Interference

US issues guidelines but no new rules for safe air travel

More than 1,100 Inmates Infected With COVID-19 At San Quentin Prison

Only half of parents and students embrace in-school mask use, NYC DOE survey finds

Pelosi denies prior knowledge of Russia bounty reports: 'Intelligence community should have brought it to us'

Britain withholds gold from Maduro, says it does not recognize him as Venezuela's president

A Miami-Dade officer struck a woman at an airport will be terminated, officials say

How Black Hollywood & White Hollywood Can Save America’s Soul — And The Movie Biz: Guest Column

Just in time for July 4, a heat wave is coming to the U.S.

I spent thousands on a Zoom makeover and have no regrets

Americans divided on who's more mentally and physically fit for presidency: poll

Pelosi attacks Trump over coronavirus, Russia hostility: 'The president himself is a hoax'

Stream It Or Skip It: ‘Warrior Nun’ On Netflix, Where A Dead Girl Is Given New Life By An Angelic Artifact And Joins A Team Of Fighting Nuns

US jobs surge: Trump sees sunshine, Biden ‘no victory yet’

What Ghislaine Maxwell’s arrest could mean for the Epstein case