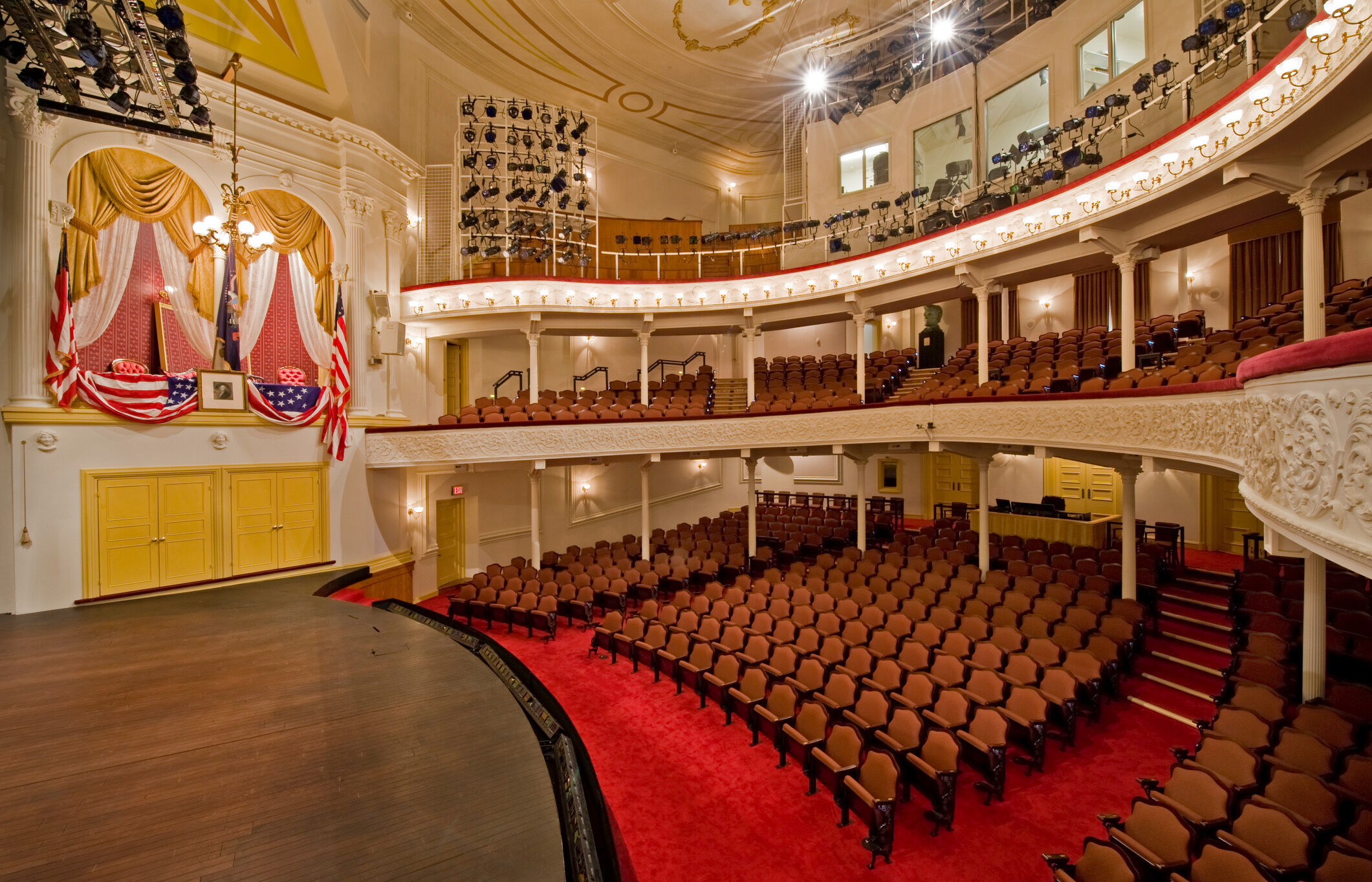 They say all the world is a stage, but what happens when the world closes the stage?

The recent coronavirus crowd restrictions have devastated the local theater community, whose entire livelihood and passion for life relies upon audiences gathering in theaters.

“We call them great reckonings in little rooms,” Olney Theatre Center’s artistic director Jason Lewis told WTOP. “It’s making what we exist to do something that is not in the public good. That’s extremely difficult because of course we believe that the arts and theater are as important as bridges and roads and anything else. … This really is existentially difficult.”

When the coronavirus hit, Olney Theatre was in its second week of “The Amateurs,” ironically about a traveling troupe of actors struggling to survive the Black Plague.

“Nobody will have them because the plague has frightened everybody,” Lewis said. “They end up performing before the Duke, who is behind a brick wall with a little chink in the wall to watch it. Members of the troupe keep dying of the plague, but the show must go on.”

He admits he was initially intrigued by the parallels before the horrific reality set in.

“I must have had a crystal ball when I programmed this because suddenly there’s a real plague on our shores and here’s a play about why arts are important during times of crisis,” Lewis said. “Then of course, it was right on our backdoor, so we had to close.”

However, it made the final performances extra poignant for those in attendance.

“What we heard from both the audience and the actors was that it was among the most memorable and important theater performances they had ever performed or watched,” Lewis said. “I was just talking to Jordan [Harrison], the playwright. He said, ‘I thought I was writing about something topical with AIDS and the bubonic plague, but look, this is crazy.”

In addition to “The Amateurs,” Olney also had to postpone “The Humans” until the fall.

“Less than 10 percent of the people who had tickets to ‘The Amateurs’ have asked for refunds,” Lewis said. “The others have either donated it back or are putting it on an account for a future performance. … Other theaters are only getting about 50 percent.”

While Lewis predicts a financial hit in the hundreds of thousands of dollars, he’s hopeful to weather the storm due to passionate donors, who already give 45 percent of the annual $8 million budget, as well as grants from foundations like the Maryland State Arts Council.

“If we can’t do that show that you gave us a $15,000 or $30,000 grant for, they’re already signaling, ‘Hey, you let us know what you need that money for and we’re not going to take it back,'” Lewis said. “What doesn’t help a nonprofit is all the tax credits you hear about. … If a bailout has to do with tax credits, that’s useless to us. We’re in need of direct funds.”

Across the river in Virginia, Signature Theatre is facing a similar financial dilemma.

“It could be it hundreds of thousands if not millions of dollars depending on how long the shutdown lasts,” Signature’s managing director Maggie Boland told WTOP. “We’re about a $12 million total company. … About $8 million is ticket sales and $4 million is contributed.”

Signature was forced to cancel the final two weeks of the world premiere play “Easy Women Smoking Loose Cigarettes,” which was sold out for its entire run. It also had to postpone the world premiere musical “Camille Claudel” until the 2020-2021 season.

“[It] was really a heartbreaking decision,” Bolland said. “[‘Easy Women Smoking Loose Cigarettes’] was a really funny, really smart play by an extraordinary local writer. … The same with ‘Camille Claudel.’ … It told the story of a pioneering female artist, and to not know if we’re going to be able to tell that story right now, it’s just a devastating thing.”

Like Olney Theatre, Signature is urging patrons to consider donating their tickets back.

“If you have a ticket to a cancellation, please consider not asking for a refund,” Bolland said. “That’s a very tangible way that audience members can be incredibly helpful right now, [or] if you have the resources to make a charitable gift or buy a gift certificate.”

“We’re encouraging our staff to telework,” Bolland said. “There are a handful of people working at appropriate distances from one another over at the Signature building, but for the most part … these are uncharted waters to be a theater who is not making theater.”

She remains confident Signature will endure unlike smaller theaters.

“No doubt in my mind, there will be theaters all around the country who won’t survive this crisis,” Bolland said. “I’m committed to making sure that Signature isn’t one of them.”

In the nation’s capital, Arena Stage is leading the charge of COVID-19 response.

“We follow what the CDC and our local government says,” Arena Stage artistic director Molly Smith told WTOP. “It made the most sense for us to cut the season short; to not produce the last three productions, but then to have them as part of next season.”

This includes “Celia & Fidel,” which opened and closed after one night, leaving the set sitting in the Kogod Cradle. Likewise, the set for “Toni Stone” is also ready to go from San Francisco, while “Seven Guitars” is already two thirds through the rehearsal process.

In the meantime, Arena’s costume department is pitching into the relief effort.

Smith has also launched Roaring Back Fund, raising over a third of a million dollars.

Right now, actors are “roaring” by recording livestreams on the Arena Stage website.

“We have 40 artists that have made beautiful pieces of art from 2-5 minutes on our website,” Smith said. “Nick Rodriguez singing ‘Oh, What a Beautiful Morning’ from ‘Oklahoma!’ in the middle of the woods. Nehal Joshi doing a monologue from Terrence McNally’s play ‘Masterclass.’ … Artists are reaching out to combat the loneliness.”

In the downtown theater district, National Theatre shut down the week of Sting’s “The Last Ship,” Warner Theatre canceled The Washington Ballet’s “Coppelia,” and Ford’s Theatre postponed “Guys and Dolls,” not to mention lost tourism revenue from its historic museum.

“We usually look at 30,000 people a week,” Ford’s Theatre director Paul Tetreault told WTOP. “Box office revenue has just been going in reverse as we process refunds. … We’re looking at the possible best case scenario for this fiscal year of losing $1 million, but I think we’re probably looking at pushing that well beyond into $2 million or $2.5 million.”

While the Kennedy Center received $25 million in federal stimulus, Ford’s lacks that luxury.

“We are a private nonprofit foundation,” Tetreault said. “We have a partnership with the National Park Service, but folks mistakenly think that is some huge financial windfall.”

“That helps offset some of our costs involved with operating the daytime operations, but we do not have a line item in the federal budget,” Tetreault said. “All of the programming, staffing and everything else, we have to raise money for. We raise over $8 million a year, in addition to our ticket sales, admissions, box office, gift shop and concessions.”

Despite the loss of revenue, Ford’s is still altruistically paying its “Guys and Dolls” artists.

“We agreed to pay all of the artists involved in the production — the actors, the orchestra, the wardrobe crew, stage hand’s crew, front-of-house crew — we agreed to pay everyone for four weeks,” Tetreault said. “Everyone will be continuing their weekly salaries.”

“Theater is a people business,” Tetreault said. “That is the greatest resource we have. It also happens to be the greatest expense in our budget. But if we suddenly turn against all those people and shut the doors and lay everyone off, what kind of enterprise are we?”

When the crisis finally subsides, it may leave a drastically different theatergoing culture.

Tetreault finds hope in the legacy of Abraham Lincoln, who was assassinated at Ford’s in 1865.

“We have Abraham Lincoln as our North Star,” Tetreault said. “Despite living in the darkest time of our country’s history, he always seemed positive and optimistic that this would come to an end, the country would hold together, and that we would see brighter days.”

Courtois about the quarantine: he Worked on the treadmill, worked with iron. I haven't lost my shape in two months
Chiellini about Pogba: in Juve, no one expected Paul to be the champion
Inter Director: Icardi wants to stay in Paris. PSG and I will find a solution
Klopp on the championship: It doesn't matter where it happens. Hopefully at Anfield
Luis Suarez: Barcelona wants to win everything they can. The team is in good shape
Sports photographers are on strike in Spain
Liverpool and Everton will play against matches at neutral stadiums
Source https://wtop.com/entertainment/2020/04/curtain-call-dc-area-theaters-hope-to-stage-comeback-after-coronavirus/

What Poland's 'ghost' election' can teach us about pandemic-era democracy

‘Diary of a Future President’ Renewed For Season 2 At Disney+

Cush Jumbo exits ‘The Good Fight’ ahead of Season 5

Cush Jumbo Exiting ‘The Good Fight’ Ahead Of Season 5

Derek Chauvin, the White Police Officer Who Kneeled On George Floyd’s Neck Before He Died, Has Been Taken Into Policy Custody

‘If you can talk, you can breathe’: Mississippi mayor ripped over George Floyd killing remarks

Column: How Trump stacks up against other presidents — his words versus theirs

Try these creative tips to help soothe a sunburn

Taylor Swift blasts Trump for threatening violence against protesters: 'We will vote you out'

Will small-business owners go to jail for breaking coronavirus rules? We'll find out

With Major City on Fire, President Feuds With Twitter Over Whether He Can Tweet About Shooting People

And yet, they will not play

Here's how to throw an indoor barbecue

‘This shouldn’t be normal’: Obama comments on George Floyd killing

Disney Won’t Be Able To “Jam People” On Prices At Parks, May “Kill” ‘Mulan’ Theatrical As Digital Boost – Analyst

1Oak founder’s #ZoomFest invites everyone behind the velvet rope — finally

Dr. Adam Splaver Has Your Prescription For Freedom

'A different kind of bleak': How 'Defending Jacob' changed the book's tragic ending

Joy Behar: Trump does not have 'empathy' in his genetic makeup

Peru Locked Down Hard and Early. Why Is Its Coronavirus Outbreak So Bad?

Amar Akbar Anthony, Deewar, Sholay, other iconic Hindi films to catch up on during lockdown

Coronavirus started spreading in the U.S. in January, CDC says

Trump, Biden both want to repeal tech legal protections — for opposite reasons

A Key Part of Surveillance Reform Is Now in Jeopardy

Minneapolis cop who knelt on man's neck charged with murder

Derek Chauvin, cop who pinned down George Floyd, has been arrested