ZADAR, Croatia — Croatia’s ruling party finished first in a general election on Sunday despite ongoing criticism over the country’s recent handling of the coronavirus pandemic.

Prime Minister Andrej Plenkovic’s center-right party, the Croatian Democratic Union, has won more than 65 seats in Parliament. It was not enough for an outright majority, but with more than 90 percent of votes tallied, his party had at least 10 more seats than it held at the start of the campaign.

Mr. Plenkovic called for early elections at the height of the pandemic in May, after his government was praised for its smooth management of the initial stages of the outbreak and his party edged ahead in opinion polls. But in the days before the vote, that decision started to look risky.

The number of confirmed coronavirus cases began to spike, and polls showed Mr. Plenkovic ceding ground to his main rivals, a center-left alliance led by the Social Democratic Party.

Still, on Sunday, Mr. Plenkovic’s party emerged with one of its best showings in more than a decade. “The gamble paid off,” said Karlo Jurak, a political analyst and academic at the University of Zagreb.

The strength of Mr. Plenkovic’s performance will make it easier for him to form a coalition with small centrist parties and parties representing ethnic minorities, analysts said. Mr. Plenkovic will also be less beholden to a new far-right group, the Homeland Movement, which has now entered parliament for the first time and is led by the pop singer Miroslav Skoro.

Though the Homeland Movement was projected to win about 15 seats, making it the third-largest in parliament, it no longer seemed likely that Mr. Plenkovic would need its support to form a coalition.

Voters opted for stability amid a profound health and economic crisis, said Dejan Jovic, a political scientist at the University of Zagreb. “It looks like the electorate sees the coming difficulties and want some center-right government to lead the country,” he said.

Throughout Mr. Plenkovic’s four years in power, his government was plagued by scandal: Nine ministers left office for reasons related to corruption. But during the campaign, Mr. Plenkovic successfully diverted attention from graft by centering his re-election bid on Croatia’s strong coronavirus response, which at one point was among the strictest in the world.

“Croatia and this government defeated Covid-19,” Mr. Plenkovic said at a press briefing in May. 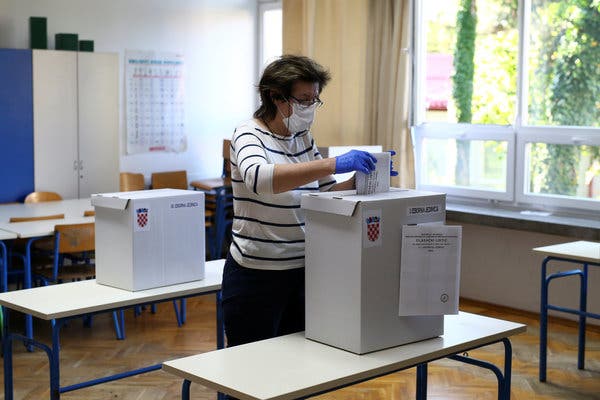 Voting in Zagreb on Sunday. Mr. Plenkovic’s party emerged with one of its best showings in more than a decade.Credit...Antonio Bronic/Reuters

But as the campaign wore on and social restrictions eased, his strategy seemed set to backfire. In the two weeks before the election, daily coronavirus cases in Croatia rose above 50, mirroring rates at the height of the crisis in April.

As cases climbed, Mr. Plenkovic’s rivals — and some of his allies — suggested that the election be postponed in the interest of public health. Attempting to ward off those concerns, the election authority briefly barred confirmed coronavirus patients from participating. But the country’s Constitutional Court later reversed the ban, allowing patients to vote by proxy.

And just as support for both the center-left and far-right began to rise, Mr. Plenkovic was criticized for endorsing an exhibition tennis tournament organized in Zadar, a seaside town, by Novak Djokovic, the world’s No. 1 tennis player.

The tournament was meant to stir interest in Croatia’s holiday vacation locations, boosting the country’s beleaguered tourism industry, a key part of its economy. It ended in embarrassment, for both Mr. Djokovic and Mr. Plenkovic.

Crowds at the event did not have to wear masks or follow social distancing rules. Several participants contracted the virus, including Mr. Djokovic himself, forcing a premature end to the tournament and undermining Mr. Plenkovic’s victorious coronavirus narrative.

Mr. Plenkovic was accused of hypocrisy after fist-bumping Mr. Djokovic and then refusing to enter quarantine, which critics felt contravened the government’s own guidelines for curbing the spread of the disease.

And when Mr. Plenkovic was defended by members of the group overseeing Croatia’s virus response, the experts of the group were accused of politicizing public health. The decision created a “double standard,” said Mr. Jurak, the political analyst.

But on Sunday, Mr. Plenkovic’s base nevertheless appeared to have kept faith in the prime minister and his party, Mr. Jurak said. “Plenkovic timed the vote correctly.”

Joe Orovic reported from Zadar and Patrick Kingsley from Berlin.

Tonali will move to Inter after the end of the Europa League
Gasperini worked at Juventus (only with youth) and Inter (sacked after 5 matches), but Atalanta became the grandee for him
Parejo and Coquelin has gone from Valencia to Villarreal
Coca: The win over Liverpool had a good impact on us. It is not easy to beat the European champion and the Premier League twice
Giovane Elber: Lewandowski is better than Messi now. Lionel is a genius, but this year Robert is unattainable
The head of the Belarusian Tribune was detained in Minsk. Max, we're with you
Karl-Heinz Rummenigge: FIFA is seriously thinking about awarding the Golden ball. I want Lewandowski to win
Source https://www.nytimes.com/2020/07/05/world/europe/croatia-election-plenkovic-coronavirus.html

Warlord's release from US prison ups tension with Colombia

Agriculture Department Extends Deadline For Farmers To Apply For Aid

One injured at Louisiana hospital, police search for shooter

Kendall Jenner and Devin Booker get flirty with Instagram exchanges

The secret to 'What We Do in the Shadows' success? Toothpicks and blue jeans

Rockies the pick to catch fire again against Diamondbacks

Not traveling right now? Finish these neglected projects from your last vacation

Every ‘Squad’ member won her primary

Is a Vaccine Really Coming?

Akon on slavery: Black Americans are ‘not letting go of the past’

Comments sections are important. Here's how we're improving ours at DetroitNews.com

How Biden decided: Whitmer pulled back, pushing pick to Harris

These are the fastest-selling pickups

First Trump ate the Republican Party, now QAnon is vacuuming up the crumbs

Does your RV look like a 'hunk of junk?' Submit a photo and earn free nights in hotels

Demand for COVID tests pushed labs to their limit. Will they be ready for fall?

Trump: Americans, Russia, China Will All Be Grabbing ‘Batches’ of Mail-In Ballots

Sumner Redstone, who built media empire including CBS and Viacom, dies at age 97

Another tornado is confirmed, bringing total to 7 during Monday’s storms

This hydrogen-powered supercar can drive 1,000 miles on a single tank

Stream It Or Skip It: ‘The Other One’ On Acorn TV, A Comedy Where A Man’s Family Bonds With His Secret Family After His Death

'Don't get muzzled': Sarah Palin shares the lessons she learned in 2008 with Kamala Harris

Commentary: A ballet for us all: How 'Appalachian Spring' carries promise for a new beginning

Emmys 2020 predictions: Count on 'Watchmen' to make a strong showing

Netflix Is Letting Some People Speed Up Playback. That's A Big Deal For Blind Fans