Cristobal, now a tropical depression, was expected to move into the Gulf of Mexico Friday, where it will intensify before making landfall in the U.S. this weekend.

After dumping three feet of rain in parts of Guatemala and El Salvador earlier in the week, Cristobal likely will strengthen into a tropical storm and grow, bringing a widespread impact when it makes landfall over Louisiana Sunday night into Monday.

WHERE DO TROPICAL STORMS FORM IN JUNE?

Heavy rain and flooding are the biggest dangers from this storm, with rain already moving into Florida and parts of the Gulf Coast states Friday morning. 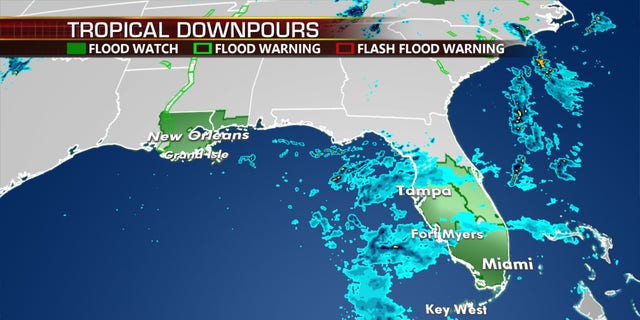 Storm surge, wind gusts of more than 60 mph and isolated tornadoes will also be possible east of where the center makes landfall.

Flood watches are in effect for portions of Louisiana, Mississippi and South Florida, and tropical storm/storm surge advisories will also be posted today. 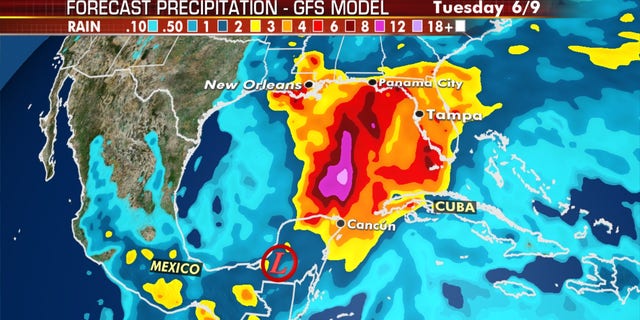 By nighttime, it was expected to move over the Gulf of Mexico. Once over water, Cristobal should intensify back into a tropical storm by early Saturday, then head toward the Louisiana coast over the weekend.

HURRICANE SEASON OFF TO A BUSY START

As the storm moves northward in the Gulf of Mexico, those in southern Texas and coastal Mississippi need to be aware. 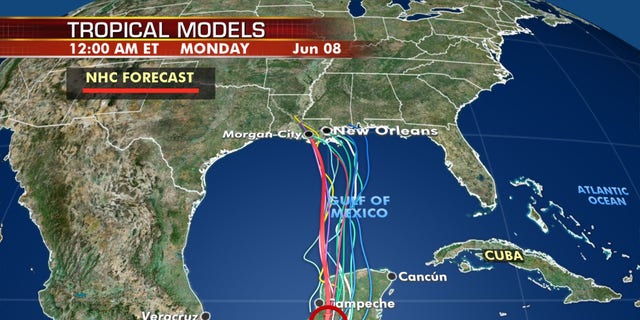 Heavy rain, storm surge, strong winds and isolated tornadoes will all be possible as the system moves inland.

Isolated tornadoes also will be a concern, especially east of where Cristobal’s center eventually makes landfall.

Cristobal is the third named storm so far in a very active season, which officially just began on Monday.

There are as many as 13 to 19 named storms predicted during the Atlantic hurricane season, which runs from June 1 to Nov. 30, according to the National Oceanic and Atmospheric Administration's (NOAA) Climate Prediction Center (CPC). 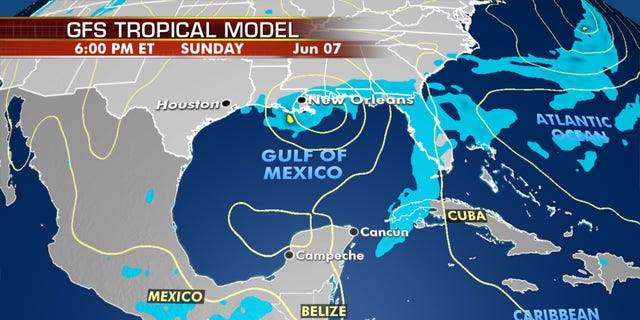 Six to 10 of those could develop into hurricanes, with winds of 74 mph or more, and three to six could become major hurricanes, capable of devastating damage.

Bartomeu on Messi: We have to renew the contract. Leo told me that he wants to finish his career at Barca
Chelsea are willing to pay Havertz 8 million euros a year and will soon start negotiations with Bayer
Showsport - about the crisis in Barcelona: Bartomeu set up Setien, star senators impose tactics on coaches
Barca President: VAR is being used unfairly. After the restart, there are solutions that help some and harm others
Real want to sign Mbappe for free in 2022. Subscription bonus – 100 million euros
Pep is a great coach, but not a very good driver. For 4 years in Manchester, damaged 4 cars worth more than half a million euros
Lampard on Abraham's decline: young players can do that. The club and the player will deal with the contract themselves
Source https://www.foxnews.com/us/cristobal-now-a-tropical-depression-center-to-move-into-gulf-of-mexico?utm_source=feedburner&utm_medium=feed&utm_campaign=Feed%3A+foxnews%2Fnational+%28Internal+-+US+Latest+-+Text%29

Fact Check: Geelani letter calling for a strike in Kashmir is fake

Indian, Chinese soldiers move away from site of deadly clash

Black man: "I was almost the victim of an attempted lynching"

Covid-19 kept them separated from their pets for months. So they've chartered a plane to bring them home

How U.S. restrictions drove Deutsche Telekom and Huawei closer together

6 dead in clash between factions of Bangladesh ethnic group

‘Their Goal Is the End of America’

Michigan tourism industry says this is "a year simply to survive"

Novavax Gets $1.6 Billion for Coronavirus Vaccine From Operation Warp Speed

What to watch for in Tuesday's New Jersey primaries

COVID-19 cases are spiking in states across the country. How does Illinois compare?

Smith and Von Spakovsky: Supreme Court's decision on 'faithless' electors is a victory for We the People

Help! My Husband Has Anointed Himself My Second Boss Since We Started Working From Home.

In Russia, They Tore Down Lots of Statues, but Little Changed

European soccer clubs face $4.5B income drop over next year

German production rebounds in May, but misses expectations

Palantir Files for an I.P.O.

Kedar Jadhav's ode to MS Dhoni on his 39th birthday

AP Was There: Serena beats Venus for 1st Wimbledon title

Car runs down protesters of alleged attempted lynching in Indiana, drives off with woman on hood

White parents: Talk to your kids about racism to raise more empathic adults

Summer learning: Does my kid need an extra boost in this year of Covid?

Can the AC filter in your home, office or local mall protect you from Covid-19?

What to Know About N.Y.C.’s Uptick in Shootings

A ‘Zero-Sum Game’: Is the World Defeating Itself in the Covid Olympics?

Germany to press for EU deal on taking in rescued migrants

Hostels Try to Adapt for the Covid-19 Era

'Almost In Tears': A Hairstylist Worries About Reopening Too Soon

A Woman Without a Country: Adopted at Birth and Deportable at 30

In Paris, Haute Couture Face Masks for All

‘Full Metal Jacket’ star Matthew Modine explains why he turned down ‘Top Gun,’ ‘Back to the Future'

Hemmed In by the Pandemic, Collins Battles for Survival in Maine

How Mexico’s Drug Cartels are Profiting From the Pandemic

This Is the Real John Roberts

Help! I’m Owed a Refund, But the Hotel Owner Refuses to Budge

The Confederate Monuments We Shouldn’t Tear Down

Trump’s Beliefs Are Carved in Stone

New Jersey and Delaware Primary Elections: What to Watch For

The Religious Roots of a New Progressive Era