With the campaign to end school police only gaining traction since the police killing of George Floyd in Minneapolis, Chicago Public Schools introduced a budget Monday that would cut in half funding for school-based officers.

CPS had a $33 million contract with the Chicago Police Department for the previous school year. But in the coming year, the school district will no longer pay $7.5 million for 48 officers on mobile school units and will receive at least $10.5 million in credit for remote learning days, when officers aren’t assigned to schools, according to CPS budget documents.

CPS CEO Janice Jackson said the cost will be pro-rated based on the number of days of in-school instruction. Remote learning will continue in CPS for at least the first quarter of the school year.

Last school year, the CPD program included mobile patrol officers who could respond to criminal activity around schools that didn’t have assigned officers but otherwise were on neighborhood patrol. “Given these broader public safety responsibilities, CPS will no longer pay for these officers,” according to the district.

Jackson said the change in funding “is just one of the many reforms that we are implementing for this upcoming school year. I can’t talk about why it didn’t happen last year versus this year. I think we have made it clear that we are committed to improving this program going forward and making sure that the spending is much more precise and there is more transparency.”

The cost of last school year’s CPD contract has also been reduced by $15 million to account for remote days in which officers were not assigned to schools, according to CPS.

The total cost of the new agreement will also depend on how many schools vote to keep officers. CPS asked Local School Councils to vote on whether to retain officers at individual schools before the Aug. 26 Chicago Board of Education meeting, when the board is expected to vote on a new contract with the police department.

Back of the Yards’ student newspaper, The Maroon, on Monday quickly reported the 6-5 LSC vote to remove officers.

Kelvyn Park High School in Belmont Gardens also voted to remove officers, but at 5-1, they lacked the seven-member quorum needed to make a vote binding.

More than 30 schools have voted to keep having officers, including several others that lacked quorum, according to CPS. Votes without quorums are considered advisory, and principals and network chiefs will have the final say, according to CPS.

In defending the use of school-based officers, CPS and city officials have focused heavily on the fact that local school councils get final say. Those opposed to school policing, including the Chicago Teachers Union, have argued that it’s a false choice when LSCs aren’t presented with alternatives for spending the money that pays for the officers. The Board of Education voted 4-3 in June to keep the current, $33 million agreement with CPD, which expires this month.

Even for schools voting to stay in the program, the officers won’t report to schools during remote learning, the district said last week.

As for the months when schools were closed because of COVID-19 in the spring, a spokesman said the district is “working with the city to conduct a reconciliation of costs for the 2019-20 school year.” 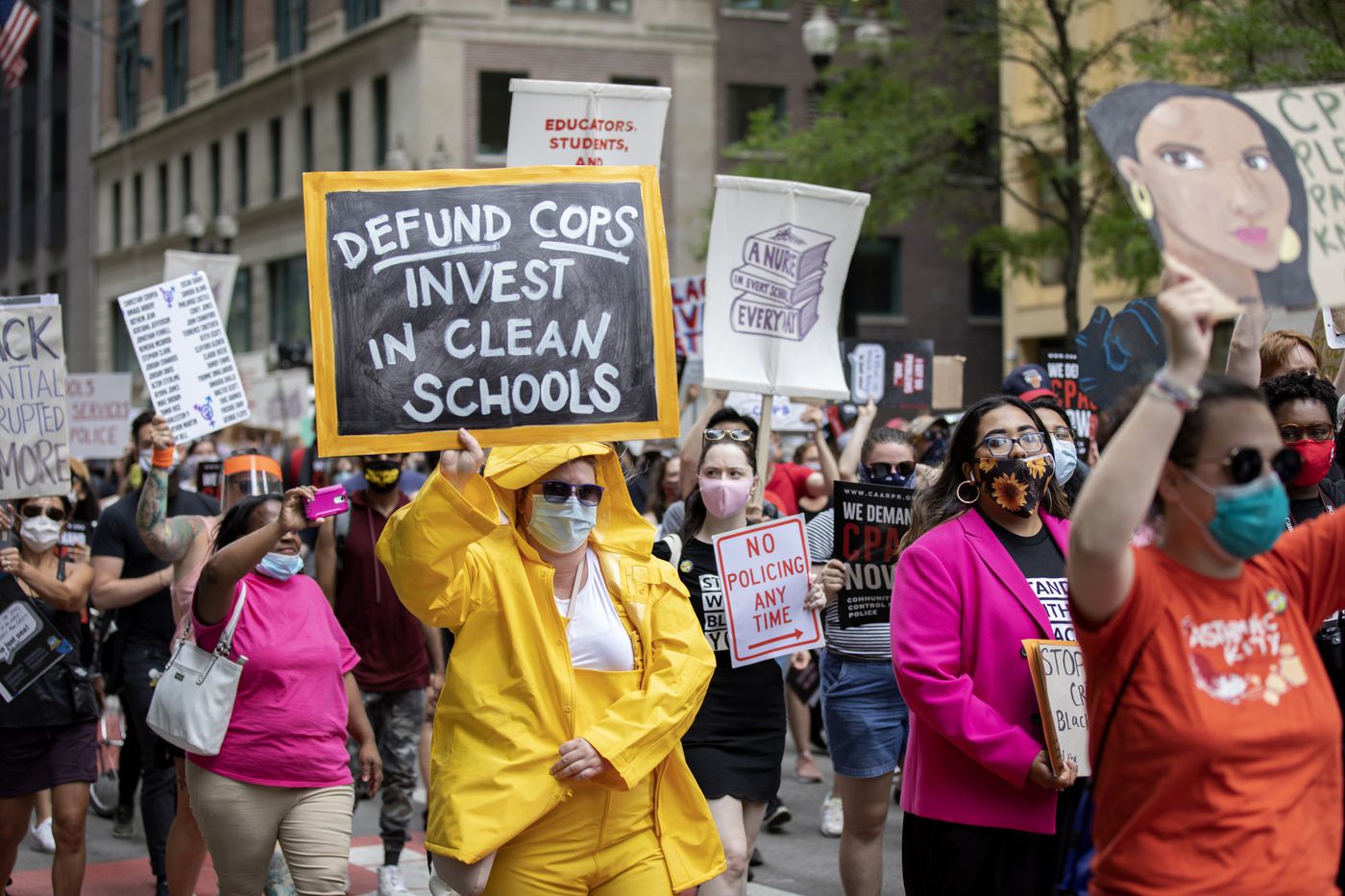 After the police killing of George Floyd, several protests in Chicago focused on the defunding of police in Chicago schools, including this one in June in the Loop. (Erin Hooley / Chicago Tribune)

CPS’s decision to continue remote learning for the start of the new school year came up Thursday night at Hancock College Prep, where local school council members met on Zoom and voted 6-4 not to retain their officers.

“We need to consider, especially now during the remote learning world where we don’t have students in the building, getting an opportunity to train our security staff to be ready for when students return,” said Principal Vanessa Puentes. That could include providing crisis and first-aid training, she said.

“This vote is not necessarily going to change the Board of Ed vote,” she said. “I do think that this vote is standing in solidarity with a lot of what our students in our community are saying right now and it is something we can control at the local school council level.”

Puentes, all three teacher and staff representatives, and both community members on the council voted to remove officers, while all four parent representatives voted to keep them. No student council member was present.

Though more than an hour of public comment and discussion preceded the vote, members acknowledged no town hall meeting had taken place. In light of that, teacher representative Froylan Jimenez asked for flexibility with the usual two-minute limit for each public comment.

Hancock Dean Mildred Garcia, who graduated from Clemente in 2007, said she remembers days when police would wait outside her high school, like they were ready to arrest students. She formed her belief that officers did not belong in schools, but never thought she’d see that change. Then last month, Clemente’s LSC voted 9-1 to remove police.

Garcia’s approach to restorative justice does not involve police, she said. She wants students to feel safe and empowered.

“Change is scary and it takes time,“ Garcia said. “... We talk about making schools more equitable for Black and brown students and today we have the opportunity to do that.”

Mayra Gutierrez, a rising senior at Hancock, said it’s important to consider the unknown histories each student has with police in addition to the known histories of the school’s two officers, who have accumulated many misconduct allegations.

Some students have been traumatized and emotionally scarred, fearful for their lives, Gutierrez said.

Teacher Cristen Chapman said it was notable that many of the supporters for school-based officers have cited concerns about external factors such as school shootings. For those cases, staff can call 911, and even if the school’s officers aren’t doing harm, they’re also not adding value, she said.

But Sandra Diaz, the parent of an incoming sophomore, asked the council to consider keeping officers.

“Having a police officer in our school grounds gives us as parents peace of mind,” Diaz said.

During a lockdown in 2018, she liked knowing that an officer was inside the school, and reasoned they had a faster response time than officers stationed off campus. While agreeing that other programs need resources, Diaz said removing officers won’t guarantee that happens.

A parent on the LSC, Janine Brzezicki, had similar concerns about safety in life-threatening situations that go beyond the traditional scope of security guards. “There are accusations of unprofessionalism and evil people in all professions,” Brzezicki said. “I believe the Chicago Police Department has been an asset.”

Puentes said while it was a difficult decision, she cast her “no” vote as someone who manages millions of dollars, has listened to students and teachers, and who wants to be true to the people who trust her with their children as well as to the work of the school’s race and equity team.

Barca defender of Modibo Interesting Everton, and Wolverhampton, Leicester and Benfica
Semedu for 40 million euros will move from Barca to Wolverhampton (ESPN)
Showsport: Tiago will make Liverpool more variable and thinner. Bayern will feel the loss, but only in the top matches
Jose did not include Dele alli even in the application (it seems, because of the conflict), but so far remained the winner-Son scored 4 from Kane's assists
Negredo scored the first goal for Cadiz. He has 113 goals in La Liga
Jose Mourinho: Kane killed the game. Tottenham were too good in the 2nd half
Braithwaite suffered a quadriceps injury in Barca training
Source https://www.chicagotribune.com/coronavirus/ct-cps-chicago-remote-learning-school-police-20200810-tz5usnswebecdhbtycsh6lmohq-story.html#ed=rss_www.chicagotribune.com/arcio/rss/category/news/

Emmys 2020: How to watch, the nominees and more

The evolution of Jimmy Kimmel’s career

Pelosi: House has 'arrows in our quiver' to delay SCOTUS nomination

VP's chief of staff on Supreme Court announcement: 'I don't think it will take us long'

Asus Expert series launch in India: When and where to watch event live

Thousands march in Berlin in support of refugees in Greece

Des Moines says no to governor’s demand for classroom return

Pelosi: House will use 'every arrow in our quiver' to stop Trump Supreme Court nominee

How the G.O.P. Might Get to Yes on Replacing Ruth Bader Ginsburg

Lawry’s among the latest Chicago restaurants and bars to close permanently due to the COVID-19 pandemic’s economic toll. Here’s our running list.

President Vows To Name A Successor To Ginsburg This Week

Bobby Flay on breaking bread at the dinner table

Peacock and Roku Finally Make a Deal. What Took So Long?

Leonard, once a starter, now helping Heat from the sideline