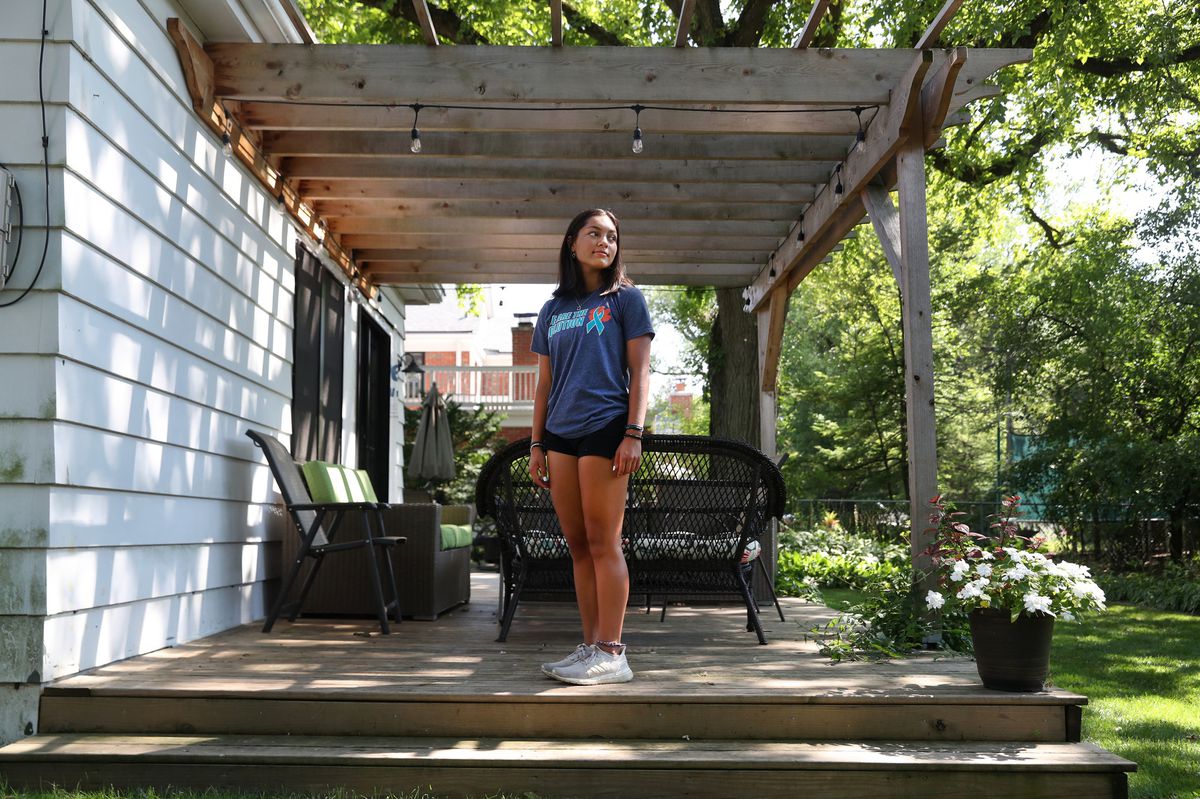 Josie Hansen outside her home in Evanston on Friday, Aug. 7, 2020. Going into her senior year at Evanston Township High School, she had two ACT exams canceled and was offered a makeup date in Michigan. (Chris Sweda / Chicago Tribune)

George Pareti is one of the lucky ones. Early one morning next month, the high school senior will make the 75-minute drive from Evanston to Racine, Wisconsin, where, after enduring three earlier cancellations and a nightmarish registration process, he’ll finally take the ACT exam he needs for his college applications.

Funny, though: He doesn’t feel all that fortunate.

“It’s gonna take a little toll,” Pareti said. “I might not be as sharp as I would be if I could just go over to Evanston and take the ACT.”

When it has come to getting a standardized test score during the onslaught of COVID-19, fate has been cruel to Illinois’ rising high school seniors. They weren’t able to take the SAT at their schools in April, and many ACT sittings were canceled over the spring and summer after test sites, mostly schools, closed their doors.

That led to a mad dash last week as aspiring test-takers swamped ACT’s website trying to reserve a spot this fall. ACT officials won’t say how many were left in the cold, but judging by social media chatter, the number could be considerable.

“Two hours in queue,” one parent wrote on ACT’s Facebook page. “When (I) got my turn ALL September seats in Illinois and neighboring states are TAKEN. First available date is December!!! Whoever is the genius who came up with this solution should be looking for a new job.”

The bedlam is happening even as colleges seek to assure applicants that standardized test scores will be optional this year. About 350 have made that declaration since the start of the pandemic, including big names such as Northwestern, Notre Dame and the University of Illinois at Urbana-Champaign.

But parents and students interviewed by the Tribune don’t buy it. They’re still convinced the lack of a good score will be a disadvantage at a competitive school.

“(Colleges) clearly look at everything you send them,” said David Eide, a southwest suburban dad whose son, after appearing to be shut out, managed to get a seat for the ACT. “If you’re able to submit test scores, it’s in your benefit to do that.”

Standardized tests have long been a fraught subject in higher education, with researchers arguing that the scores, which can be boosted through tutoring or multiple attempts, are a better gauge of socioeconomic status than academic ability.

About 1,000 schools had already declared their admissions to be test optional before the pandemic, meaning applicants theoretically won’t suffer for failing to include a score. Bob Schaeffer of the National Center for Fair and Open Testing, a watchdog group that aims to improve college assessments, said he believes the schools really mean it, but he doesn’t blame parents for being wary.

“That’s how the game was played back in the day when they went to school,” he said.

He is less confident about colleges that made the switch after the pandemic began, since they have not established a track record. Karen Marks, a former Dartmouth admissions officer turned admissions consultant, said their sincerity probably varies.

“Some institutions will not disadvantage students,” she said. “I think others, even with the best of intentions, have been using this paradigm forever, so asking them to suddenly disregard a data point to which they’ve been giving so much weight is tough. Others might be doing it for the optics.”

Andy Borst, director of undergraduate admissions at the U. of I.‘s flagship campus, which in June placed a one-year moratorium on its testing requirement, said the school is indeed serious: The lack of a test score won’t hurt students when it comes to admission, scholarships or getting into an honors program.

But could an impressive score help? He allowed it might.

“We know that some students have taken the test and are very proud of their test scores, and we didn’t want to say to a student who got a 1500 (on the SAT), ‘Your accomplishment doesn’t mean anything,‘” he said.

That kind of squishiness is what has driven parents and students to continue to clamber after testing opportunities. Mary Ann Maki and her daughter, a senior at St. Charles North, spent eight hours on the phone trying to get a seat for the ACT, only to be told at last that nothing is available in Illinois until February.

“I’m not sure universities know how sporadic it is for kids to take it,” she said. “Test optional is great, but it’s hard to figure out if universities are really going to look at that as optional.”

Some students have gotten spots but will have to take a lengthy road trip. Clay Lindner, a senior at Evanston Twp. High School, said he registered for a September test in Chicago on ACT’s website, only to be transferred to a site in Jonesboro, Arkansas, when it was time to check out.

Similar tales abound, and ACT officials say those last-second shifts were due to a computer bug that has been fixed. But Lindner, taking no chances, grabbed a spot in Louisville, Kentucky, not far from where extended family members live.

“We have the ability to drive all that distance,” he said. “We’re very privileged to be able to do test prep, to drive six hours or more just to take a test and stay with family. But for a lot of families that don’t have that, what are they going to do?”

ACT executive Shane King said the company is dependent on schools to provide testing sites, and as shutdowns swept the country, those sites dried up. The locations booked for September and October are solid as of now, he said, but he can’t guarantee they won’t get canceled, too.

Meanwhile, he said ACT is still trying to add sites, and he advised students to keep checking the website for new openings.

“We believe with what we have today and will be adding over the coming weeks, it may not be enough, but we are absolutely trying to create as much capacity as humanly possible,” he said.

Some aspiring test-takers have been unimpressed with ACT’s effort, particularly its online appeal for high school juniors to register for later dates so seniors can get their scores. That led to more than 1,500 incredulous and often furious comments on its Facebook page, to which the company responded: “Unfortunately, our system does not allow for priority registration by class.” 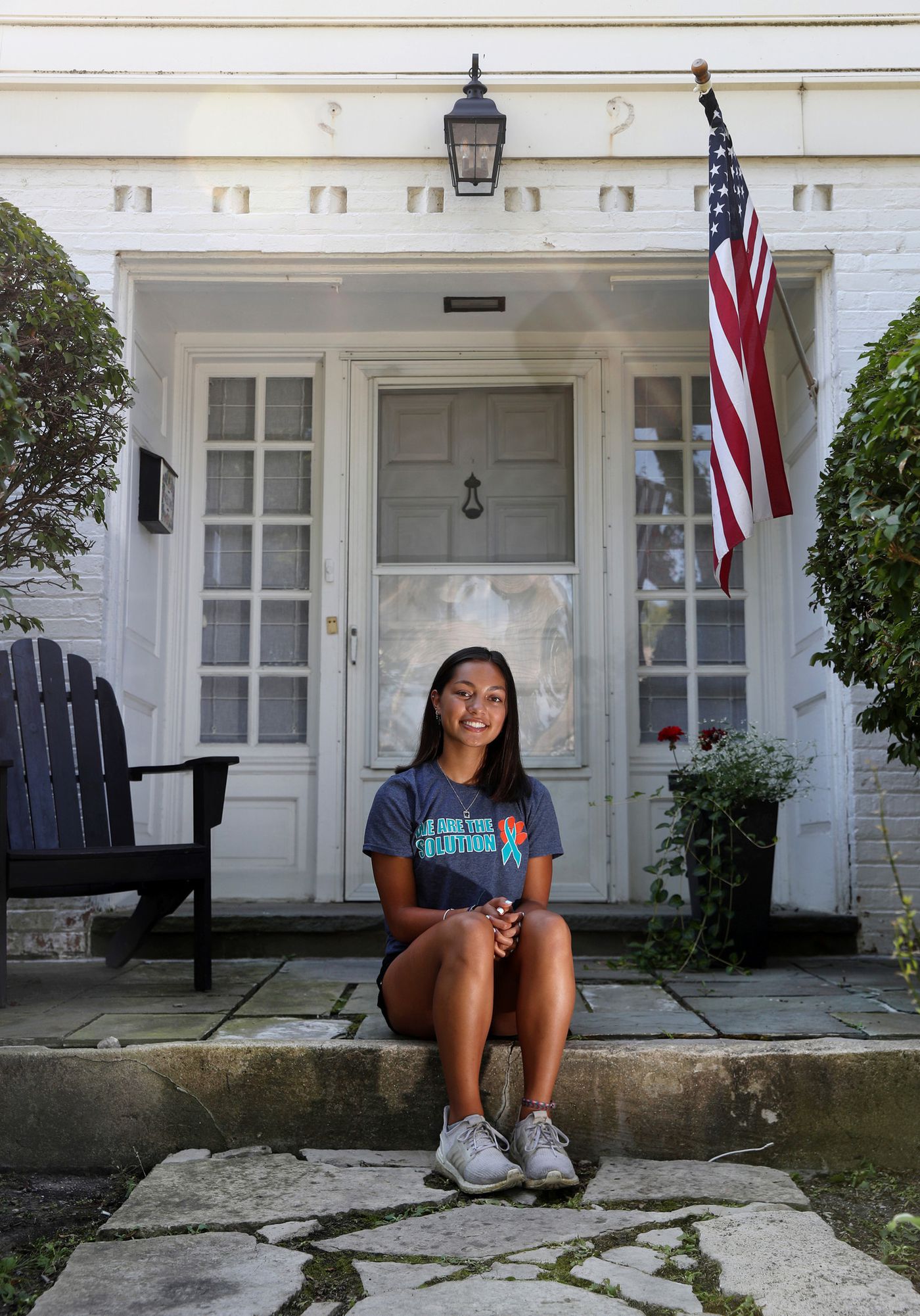 Josie Hansen outside her home in Evanston on Friday, Aug. 7, 2020. Going into her senior year at Evanston Township High School, she had two ACT exams canceled and was offered a makeup date in Michigan. (Chris Sweda / Chicago Tribune)

The SAT, the ACT’s main competitor, has taken a different approach. The College Board, which administers the exam, allowed seniors to sign up early for tests that will resume Aug. 29, and some students interviewed by the Tribune said they were able to get SAT spots when their ACT plans fell through.

One is Evanston senior Josie Hansen, who after two ACT cancellations was offered a spot in Holland, Michigan, a three-hour drive away. She declined, and instead will take the SAT in nearby Wilmette.

Hansen has prepped only for the ACT so far, but said she didn’t expect much trouble making the switch.

“From what I’ve heard the test is pretty much the same; the timing is just different,” she said. “I hope (the studying) won’t all go to waste. We’ll see.”

Seniors might yet get the chance to take the SAT in their schools. Some districts starting the year with remote learning, such as Naperville District 203 and Palatine-based Township High School District 211, said they’re still planning to offer the test this fall.

If all this effort for supposedly optional tests sounds crazy — particularly when some students have reportedly tested positive for COVID-19 after sitting for the exam — the approach taken by Northern Illinois University might be appealing. It has joined the small but growing group of “test blind” schools, meaning from this year forward it won’t consider scores when making admission decisions.

Quinton Clay, the school’s director of admissions, said that should ensure greater equity among applicants. And besides, he said, experience has shown that test results don’t mean all that much.

“Locally, when we looked at students in good academic standing and student graduation rates, standardized test scores were not predictive,” he said.

Jose Mourinho: what happened to Dyer is not normal, he was dehydrated. If the League management doesn't care about the players, I don't
Jose went berserk twice during the match with Chelsea: ran over Lampard and ran to look for Dyer - he rushed to the toilet right during the game
Lampard on relegation from the League Cup: we Need to keep a positive attitude. Everything will come if Chelsea score second, leading the score
Call of nature, what can you do? Dyer explained why he ran to the dressing room during the match with Chelsea
Mourinho and Lampard shook hands before the penalty shootout. In the first half, they had a fight
Dest arrived in Spain to complete a transfer to Barca
Lionel Messi: I Am responsible for my mistakes. I wanted Barcelona to become stronger
Source https://www.chicagotribune.com/coronavirus/ct-act-sat-coronavirus-covid-college-application-20200810-4orfahifyzh4ff34tsteh2h7o4-story.html#ed=rss_www.chicagotribune.com/arcio/rss/category/news/

Biden and Trump Will Debate Six Main Issues. Here’s Where They Stand.

Meron Benvenisti Dies at 86; Urged One State for Jews and Palestinians

The Bad Bunny Crocs Sold Out