Coronavirus wipes out 98% of location shoots in L.A. in second quarter

When the coronavirus outbreak swept the globe, film and TV production ground to a halt as stay-at-home measures took effect.

A new report on location filming reveals just how devastating the shutdown was in the Los Angeles region.

Virtually all location filming stopped during the second quarter when L.A. recorded only 194 shoot days from April through June — just 2% of the 8,632 shoot days recorded during the same period in 2019. It was the lowest filming level on record, said FilmLA, the nonprofit group that handles film permits for the city and the county.

A shoot day is defined as a crew’s permission to film at one or more locations (excluding certified soundstages) during a 24-hour period.

Television, a key driver of local production, took a major hit. The sector generated only 55 shoot days, down 98% from the same time a year ago.

Location shoots for commercials generated 58 shoot days, 96% below the second quarter of 2019. Feature film production, the third-largest industry segment, had only three days of shoots, compared with 986 shoot days a year ago.

The pandemic struck just as the demand for streaming was driving film production to new heights and soundstages were reaching capacity. The industry is still struggling to get back on its feet with some small productions filming again, but the threat of a resurgence in the virus spread risks turning cameras off again.

“It’s just a reality that once the pandemic hit, this was going to be the result,” FilmLA President Paul Audley said. Now producers have “a real concern about how much resources they put in today to getting up and running, hiring people, getting everything back, with the fact that L.A. is seeing an increase in hospitalizations.” 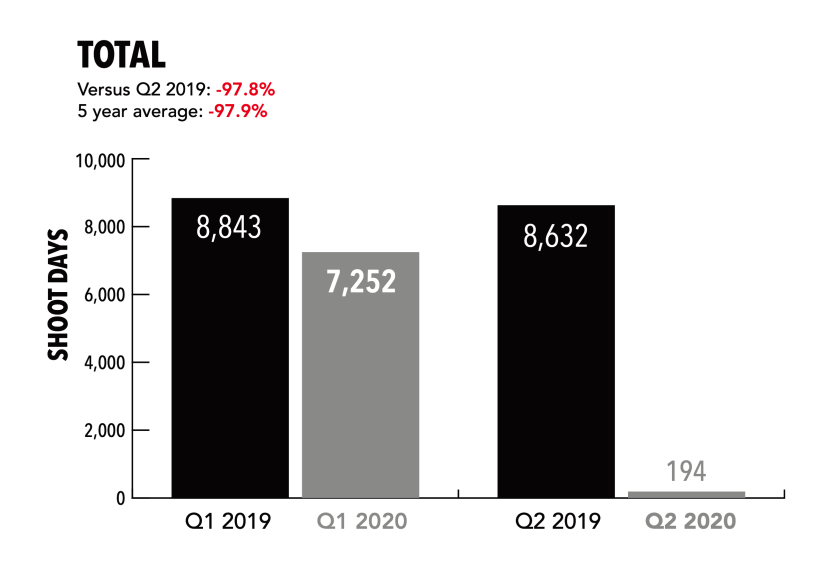 A report from FilmLA illustrates the collapse in total film shoot days in the second quarter of this year.

The shutdown has also devastated many local businesses, from prop houses to caterers, that service the industry.

“We also have to be very concerned about the thousands of small businesses that depend on this industry and whether they have been able to sustain for three months-plus without work, ” Audley said. He estimated that in L.A. at least 5,000 small businesses, with 10 or fewer employees, depend on the film industry.

Filming has slowly resumed. Since June 19, FilmLA has fielded around 14 film permit applications per day and received hundreds of calls from filmmakers interested in resuming work. That is just 20% of the daily applications intake that existed before the pandemic.

Most of the location shoots are for very small productions, such as commercials or music videos. Larger productions such as feature films are not expected to resume filming until August or later, Audley added.

Several TV shows have resumed filming on soundstages, including Freeform’s “Love in the Time of Corona” and TV soap operas “The Bold and the Beautiful,” “The Young and the Restless” and “General Hospital.”

“The Bold and the Beautiful” had a brief hiatus last month to better accommodate the mass testing needed for film shoots, according to reports.

Michael Bay’s pandemic thriller “Songbird” hit a snag this month when SAG-AFTRA told its union members not to work on the local production, citing a concern about whether it was following new safety protocols created by the industry. The warning has since been rescinded by the union.

Matthew Boyd struggled yet again. Here's what his setback means for Detroit Tigers

Robbie Waters, an Old-School Cop and Legislator, Dies at 84

Joe Biden’s VP Pick: Reporters Scramble To Get A Scoop That Carries High Risk and Reward

Detroit Lions want Kenny Golladay to be like DeAndre Hopkins; other coordinator takeaways

Retirement on hold: Chan Gailey back at work for Dolphins

Nearly two-thirds of NYC parents don’t want their kids back in school: data

Raft Off on Lake St. Clair defies ban on gatherings of 250-plus people