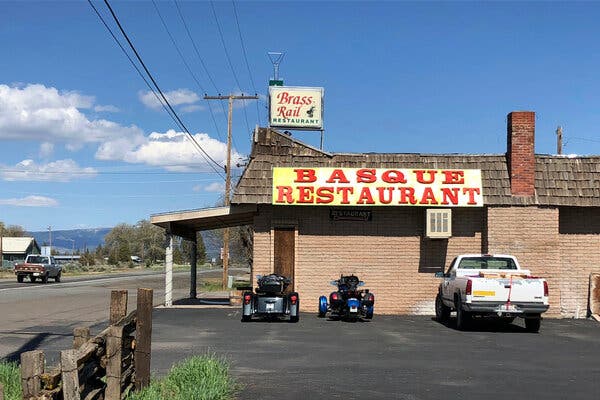 The Brass Rail, a bar and restaurant in Alturas. An owner said a waitress who worked at the bar tested positive for the coronavirus. Credit...Scott Sonner/Associated Press

(This article is part of the California Today newsletter. Sign up here to get it delivered to your inbox.)

My colleague Thomas Fuller traveled to Alturas to report on a county that had been mercifully isolated from the coronavirus — until last week.

Evergreen forests surrounded by lumpy mountains and vast valleys filled with thousands of cattle. Residents of Modoc County, population 8,800, like to point out that social distancing was a way of life well before the coronavirus arrived in California. Alturas, the Modoc County seat, has a single red flashing traffic signal at the intersection of what maps show as interstate highways but are really just winding two-lane country roads.

For five months, officials in Modoc had hoped that the county’s isolation in the northeastern corner of the state would spare it from the virus. And until last week, when a couple in Alturas tested positive, Modoc had been the last county in California without any confirmed cases.

Now the message seems clear: If the virus made it to Modoc County, where the closest big town is a two-hour drive, it’s everywhere in California.

Modoc may be isolated, but it is not an island. The Modoc County Health Services Department did not identify the two people who contracted the virus, but Jodie Larranaga, an owner of the Brass Rail, a bar and Basque restaurant, said a waitress who worked at the bar was one of the people who tested positive. The waitress and her husband had recently returned from a family vacation to Fresno, Ms. Larranaga said.

When it announced the infections on Tuesday, the Health Department asked any residents who visited a bar in the past two weeks to call a hotline. But Ms. Larranaga said that was not casting the net wide enough.

“This couple has been all over the place,” she said. “They were all around town.”

Alturas had gone ahead with a July 4 parade and had hosted motocross races. Most residents still go maskless at supermarkets in Alturas, despite a statewide order to wear them in public places. Tex Dowdy, the Modoc County sheriff, refuses to implement the mask order.

Juan Ledezma, the owner of a thrift store in Alturas, said most of the two dozen daily customers came in without a face covering.

“I would say 20 percent wear masks,” he said. “I don’t ask them to do it because they might get offended.”

“To most of the people here, it’s more of a political statement than a health statement,” he said.

“I would like to think that we’re going to do a better job of trying to prevent more people from getting Covid,” he said, “but I wouldn’t bet on it.”

Here’s what else you may have missed

We often link to sites that limit access for nonsubscribers. We appreciate your reading Times coverage, but we also encourage you to support local news if you can.

Saving on rent by sharing a home meant Karla Lorenzo could spend more on her children’s needs. But it also brought tensions with other tenants, along with the health risks of overcrowding.Credit...Brian L. Frank for The New York Times

Read more about why the Central Valley has become the state’s latest coronavirus hot spot. [The New York Times]

Learn more from this map showing where students are most at risk of encountering a classmate who arrived to school with the coronavirus. [The New York Times]

And read about California’s plan, which would keep most schools remote-only to start the year. [The New York Times]

A 747 Supertanker dropped fire retardant along a ridge ahead of the Apple Fire on Saturday.Credit...Josh Edelson/Agence France-Presse — Getty Images

Vidal said goodbye to Barca: Proud to have worn this shirt and played alongside the greats
Sporting renamed the Academy in honor of Ronaldo
Suarez will receive 9 million euros a year at Atletico
Liverpool will not buy anyone else in this transfer window
Semedu will move to Wolverhampton for 35 million euros. Contract - until the summer of 2025
Bosnich about Kepa's mistake: I don't think this is the end. He needs a competitor
Rakitic finished his career with the Croatian national team
Source https://www.nytimes.com/2020/08/03/us/california-coronavirus-modoc-county.html

‘Wakanda Doesn’t Have Suburbs’: How Movies Like Black Panther Could Help Us Save the Planet

Beyoncé and Jay-Z spotted out for dinner with Solange

Emmys 2020: How To Stream All The Emmy Winners

Bobcat Fire in California becomes one of largest in Los Angeles County history, whips up 'smokenado'

Poisoned opposition leader demands his clothes back from Russia

The Best and Worst Moments of the 2020 Emmys

President Trump calls injured Compton deputies, one of whom can't speak and wrote out her responses

Exclusive: Kushner and Soros-backed real estate startup Cadre is going back on offense

Trump says he will announce Supreme Court nominee this week

Did You Catch ‘Ratched’s Nod to ‘The Green Mile’?

Shaq buys a Las Vegas home near his chicken restaurant

When did good governance become an “armageddon option”?

How to Know if an Online Marketing Expert is Actually Credible

The first polling tidbits after the death of Justice Ginsburg.

Atlanta man attacked by shark while snorkeling in Florida Keys

Stars are lining up for Van Jones’ virtual reality-TV experiment

Biden had $141 million cash advantage over Trump heading into September