Although New Orleans has seen the curve flatten in their area, the once named epicenter of the coronavirus pandemic is still feeling the economic aftermath. Small business owner, Rheannon Serino talks to Fox News about what business and tourism has been like in the Big Easy since stay-at-home mandates were lifted in the French Quarter.

While Americans are still wary of traveling long distances during the coronavirus pandemic, some are searching for domestic travel destinations in COIVD-19 hot spots, a new report suggests.

Florida was the most-searched travel destination in the country, with California and Nevada trailing closely behind --  all states with high spikes in coronavirus cases, according to a USA Today analysis of data from Trivago, a vertical for searching and booking hotels that measures hotel search volume.

Florida seemed to be the top state of interest for potential travelers, with just an 18% dip in search for June (over last June). At the beginning of April, searches for Floridian vacation spots were 95% below where they were at the same time the previous year. Consumer interest in travel to the Sunshine State also seemed to be timed around Disney World's reopening in July. 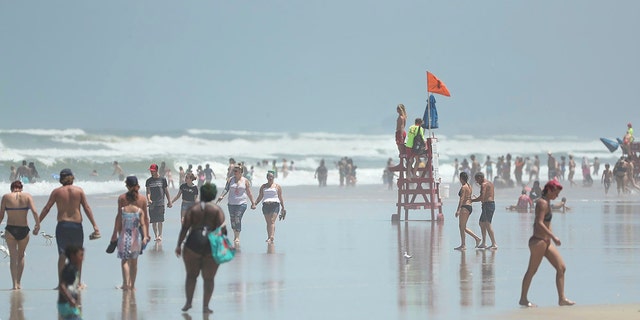 AT DISNEY WORLD: NO MASK, NO ON-RIDE PHOTOS

However, with spiking coronavirus cases surging in multiple southern states, Disney World recently announced that it would be reducing its operating hours in September as a result of fewer expected guests. The popular Magic Kingdom and Animal Kingdom parks will also open an hour later and close an hour earlier than initially planned. A separate report found that parents were not ready to bring their kids back to theme parks like Disney World, Disneyland and others.

PARENTS NOT READY TO BRING THEIR KIDS BACK TO DISNEYLAND, DISNEY WORLD AND OTHER THEME PARKS: REPORT

However, in July, hotel searches in the Silver State decreased 58% over 2019 levels at the end of July, the findings showed.

When it comes to travel, however, it may be more about when than where for most people. A related study of 2,000 travelers, conducted by the Rosen College of Hospitality Management at the University of Central Florida, and reported by USA Today, found that while more than half (around 67%) of participants said they would refrain from traveling within the next year, a whole 27% of respondents did not consider the risks of contracting the coronavirus when choosing a vacation destination.

Tottenham are not selling Mourinho's merch - because Chelsea still own the trademark rights. But it didn't stop Manchester United
Shomurodov is close to moving from Rostov to Genoa for 8 million euros (Sport Italia)
Pobegalov about 12 cases of covid in Shinnik: I hope we can start training by October 4
Kulchiy is likely to become an acting coach of Dynamo. They want to keep Novikov in the club's system
Due to covid, the Premier League season may be considered prematurely completed if the 2/3 and 3/4 rounds are completed
Bayern could give Nübel a loan deal if Ulreich stays at the club
Former Italy striker Pazzini is Interested in Spezia. He is 36
Source https://www.foxnews.com/travel/coronavirus-hot-spots-tourism-florida-nevada?utm_source=feedburner&utm_medium=feed&utm_campaign=Feed%3A+foxnews%2Fmost-popular+%28Internal+-+Most+Popular+Content%29