An anti-Trump display that has been stirring up controversy in an Illinois town was vandalized on Tuesday evening.

The local news outlet Patch first reported on Wednesday that what has been called the "Coronavirus Death Scoreboard," which was unveiled last Friday in the northern Chicago suburb of Northbrook was defaced with black spray paint, most of it covering President Trump's name. The sign, organized by liberal activist Lee Goodman of Peaceful Communities, had been updated to mark the 200,000 Americans who died from the pandemic and suggested that the president is to blame.

According to Patch, the Northbrook Village Board was discussing whether or not the polarizing display should be taken down because of an outcry from residents. The board ultimately agreed with village attorney Steven Elrod recommendation against removing the display, which is located in a public park near the downtown area, arguing its removal would violate the First Amendment.

At the meeting that was held Tuesday evening, village President Sandy Frum read emails aloud that expressed outrage towards the sign. 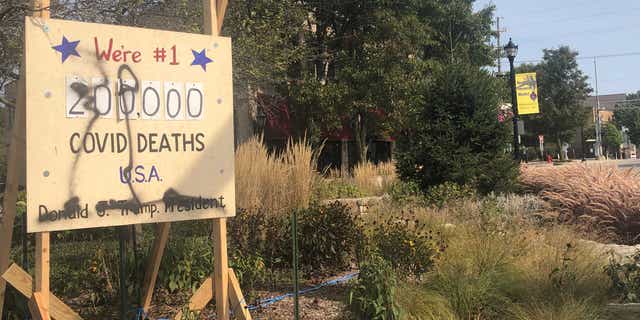 The anti-Trump display referred to as the 'Coronavirus Death Scoreboard' was vandalized on the evening of Sept. 22 in Northbrook, IL.

"The sign needs to come down as soon as possible. It is appalling that the village would allow for such a sign to be displayed, especially because it has a clear political message. Take it down," Northbrook resident Victoria Fisher wrote.

Another said the resident was shocked and disappointed that the board approved of political speech.

"Approving members of the board were delinquent in their responsibilities to uphold the rules prohibiting political signs," Mark Cassell said. "Northbrook is a kind, peaceful community. There is no place for ugliness of politically motivated propaganda anywhere, especially on taxpayer-funded public grounds."

Not everyone was opposed to the display.

"As someone who is at high risk for COVID, I strongly support Lee Goodman's sign,"  Katherine Caparroso of Northbrook wrote. "Quarantine fatigue is well-documented and is rampant in Northbrook ... The sign is a reminder of how important it is to wear a mask."

The sign was erected on Friday in Northbrook's Triangle Park near a heavily trafficked intersection located across the street from the town's train station. 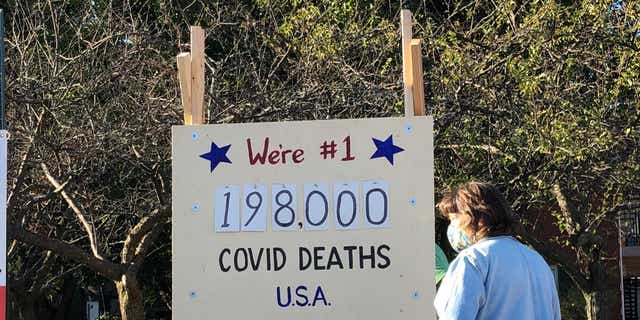 A 'scoreboard' showing the coronavirus death toll was put on display in Northbrook, IL

Lee Goodman, the leader of the far-left group Peaceful Communities, told Patch that the display is a reminder that health precautions are still needed to stem the spread of the new coronavirus.

"Schools and businesses are reopening, but the disease is still spreading and people are still dying," he said.

Goodman is upset that the United States has the highest number of COVID-19 deaths in the world.

"It is a tragedy and a disgrace that we have failed to do all we could to confront this public health crisis, and as a result, many people have died unnecessarily," Goodman said. "But, we can do better in the future. We hope that public awareness will lead people to demand a more effective response by our federal government."

Peaceful Communities' website highlights a petition to "Repeal the Second Amendment" and calls for the "end of immigrant detention & restore asylum."

Goodman's Facebook page is filled with essays slamming President Trump and promoting liberal policies. One post from June 2017 was about the near-fatal shooting of "Republican Gun Lover" Rep. Steve Scalise, R-La.: "Am I supposed to care about this Congressman? Is the shooting simply karma? Does this Congressman, whose voting record suggests he was unconcerned about the thousands of other people who are victims of shootings every year, deserve my sympathy?"

Pro-Trump protesters slammed the display. Two of them held up a Trump banner in front of the anti-Trump scoreboard.

One of the pro-Trump protesters shouted insults about liberals and sang famous songs with changed lyrics to mock the left. Another attendee held a sign that read, "Communism kills more people than COVID-19." 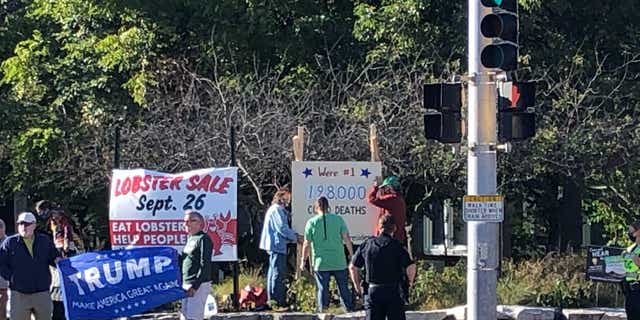 Pro-Trump protesters arrived at the intersection where the anti-Trump scoreboard was being displayed.

An observer who arrived to witness the controversial sign told Fox News that Goodman has a reputation of being a "pest" who likes to "stir s--- up."

Critics mocked the location of the anti-Trump sign, which is being upstaged by a local church's lobster sale banner at the same street corner.

A spokesperson for The village of Northbrook confirmed to Fox News that it approved the public display.

"This area is a designated public forum. The display application was reviewed by village staff and the village attorney and determined to be in compliance with the village’s requirements governing the public forum," Cheryl Fayne-dePersio, a communications specialist for The village of Northbrook, told Fox News.

According to Patch, Goodman will regularly update the sign to the current coronavirus death count.

Alli was not included in Tottenham's bid for the match against Burnley, although he is not injured
ISCO: Zidane changes me in the 50-60th minute or even at half-time, and releases me in the 80th
Pirlo on Ronaldo's optimal position: Start from the left inside and move to the center. He can play alongside Morata or Dybala
Mikhail Butovsky is probably the best doctor in our sport. A serious conversation about rudeness to doctors, salaries and leaving CSKA and Spartak
Naumov about the defeats of Zenit, Loko and Krasnodar in the RPL after the Champions League: Lack of professionalism in the players and the ability of the coaches
Ronaldo violated the coronavirus Protocol. An investigation is underway. Italian sports Minister on the departure of the player from Turin
Sports Director of Khimki about 2:0 with Rostov: We proved that we are a team and can win on the road
Source https://www.foxnews.com/us/coronavirus-death-scoreboard-vandalized-northbrook-illinois

Trump to escalate campaigning as Biden steps up own travel

Drew Barrymore gets emotional while discussing divorce from Will Kopelman

Margot out at home, Rays unable to steal Game 5 from Dodgers

Analysis: The year 2020 is defined by lines