The new work-from-home reality has rapidly recalibrated the fashion code for professional wear, and that spells trouble for the retailers who sell formal office clothing.

On Wednesday, Brooks Brothers, the 202-year-old menswear retailer that has dressed 40 US presidents and is synonymous with the classic Wall Street banker look, filed for bankruptcy as demand for suits plummeted amid the pandemic. 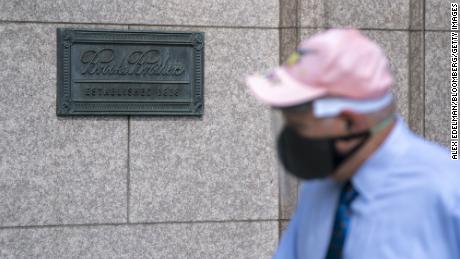 Meanwhile, Ascena Retail Group, which owns Ann Taylor and Lane Bryant apparel chains, told Bloomberg it's weighing all options to stay afloat after its business was hit hard by a pullback in clothing purchases, including officewear. Ascena is reportedly planning to shut at least 1,200 stores. It has 2,800 locations in the United States, Canada and Puerto Rico.
The turbulence has ensnared Men's Warehouse, too. With more than 10 million men who've lost their jobs and millions more working from home in recent months, buying a suit is hardly a priority. Tailored Brands, which owns Men's Warehouse, could be another retailer in the space mulling bankruptcy.

With more work calls and team meetings now taking place from the comfort of home, office wear has become decidedly more relaxed. It's a shift that's been occurring for years, as employers in more buttoned up industries like financial services competed for talent with tech companies and upstarts that had their own, more laid-back work cultures.

'Nail in the coffin'

The pandemic may have ended formality forever.

Cadmus worked at Brooks Brothers earlier in her career, helping to set up a client concierge service for the company's flagship store on New York's Madison Avenue. "The reality is that workwear trends have been shifting for a while now and sadly the pandemic was the final nail in the coffin."

Even prior to the national shutdown, Cadmus said her clients were gravitating to a more relaxed work look. "There was an enormous shift taking place towards business casual," she said.

Last year, Goldman Sachs announced that its employees could start dressing down for the office. The Wall Street firm has historically favored collared shirts and suits.

"Then when Covid-19 hit and people were forced to work from home, there was an absolute halt in buying formal workwear," said Cadmus. "The emphasis from my clients now is on polished loungewear, where the fit is not as tailored and comfort is key."

Her male clients, she said, are looking for new shirts but not trousers. "They are not asking about sports coats, suits, or shoes. It's just shirts," she said. Women want statement necklaces, earrings and broaches instead of suits and dresses for a more put together look for video calls.

Some people aren't even changing out of their pajamas In June, 47% of consumers told market research firm NPD they are wearing the same clothes throughout most of their day while at home during the pandemic, and nearly a quarter said they liked wearing activewear, sleepwear, or loungewear most of the day.

"People clearly do not want to change into multiple outfits throughout the day, especially under these circumstances," Maria Rugolo, NPD's apparel industry analyst, said. "It is about blending and maximizing one's wardrobe. They still want to look presentable for work, but also want to feel comfortable."

Stylist Nicola Harrison, whose clients include professionals in finance and other industries, acknowledges that workwear is now less dressy.

"But I've also been pushing against it," she said. "For men, suits and sports coats provide a polished, professional look. And let's be honest, they are very forgiving and hide a multitude of sins."

For her, casual is acceptable at work to a degree. "Dark jeans, button-down shirt, a sports coat. You just shouldn't go too far in the other direction because you are working from home." Her "don'ts?" Ill-fitting polo shirts or clothes from your college days.

"Fit is key even with a casual look, even for a Zoom call," she said. "With all the craziness happening in the world, the one thing you can control is your appearance. So why let yourself go?"

Sergi Roberto on the Barcelona-Bayern match: It will be like the final
David Silva has agreed a 3-year contract with Lazio for 9 million euros. He will leave the city for free
Mertens Pro 1:3 with Barca: after Langle's goal, Napoli forgot how to play
Muller before Barca: anything can happen in a match of this level
Mammana about moving to Sochi: I will Try to achieve a lot with this great club
Chakyr should not have counted Langle's goal. Ex-referee Andujar Oliver on the Barcelona-Napoli match
Lampard on Chelsea's challenge for the new season: we Don't want to limit ourselves to fighting for the top 4
Source https://edition.cnn.com/2020/07/08/business/office-wear-dead-brooks-brothers/index.html?utm_source=feedburner&utm_medium=feed&utm_campaign=Feed%3A+rss%2Fcnn_latest+%28RSS%3A+CNN+-+Most+Recent%29