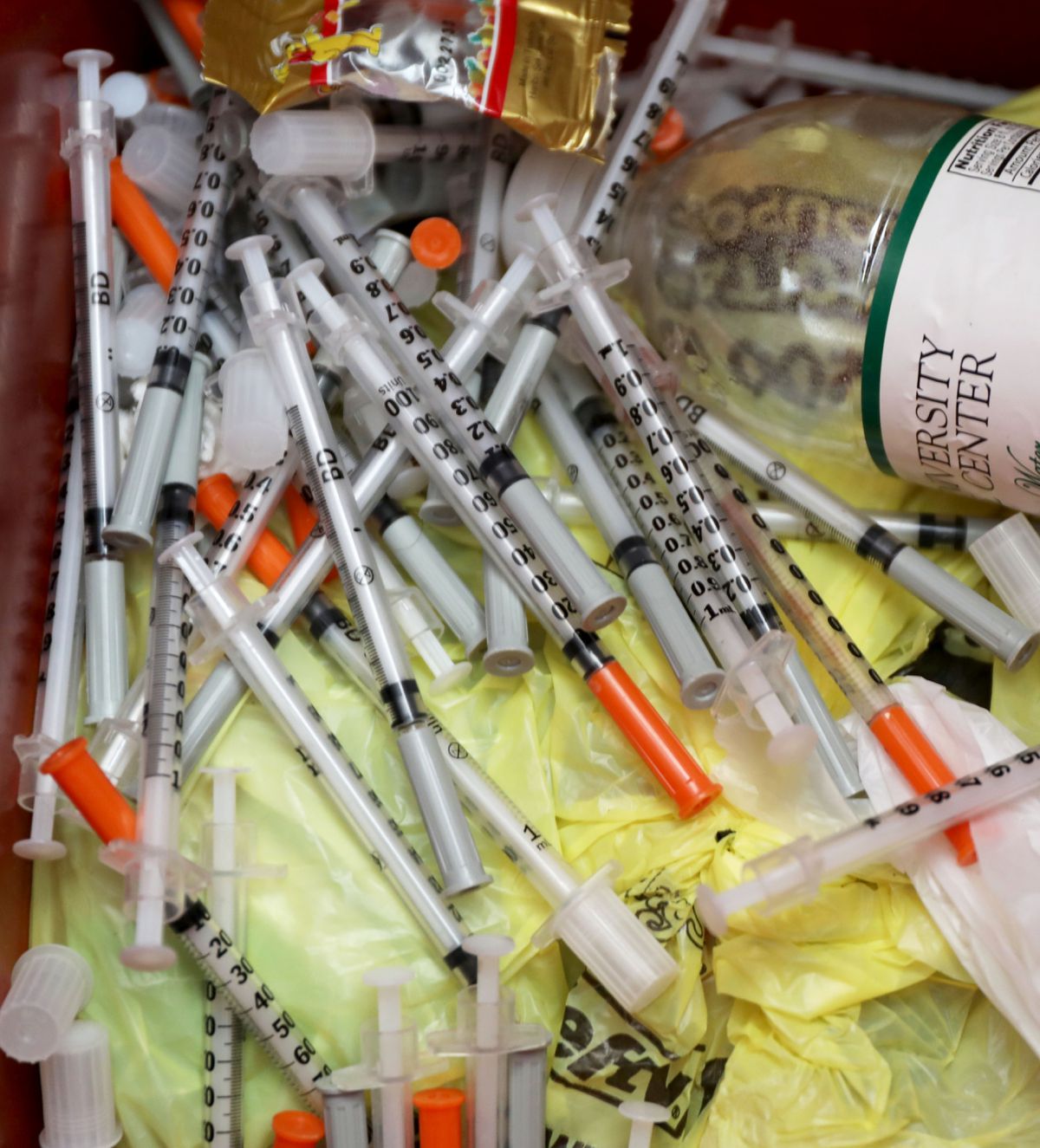 Cook County is grappling with twice the amount of reported opioid-related deaths compared with this period last year, the medical examiner’s office announced Tuesday amid skyrocketing caseloads during the coronavirus outbreak.

In 2020, the county’s deaths ruled as opioid overdoses are on track to double last year’s total number of opioid-related cases, the chief medical examiner, Dr. Ponni Arunkumar, said at a Tuesday news conference. The fatalities, similar to those from the coronavirus and gun violence crises, are disproportionately affecting Black people, she added. The majority stem from Chicago’s West Side neighborhoods.

Cook County Board President Toni Preckwinkle said the briefing was convened “to sound the alarm” as the three overlapping epidemics devastate the county’s most vulnerable populations.

“This year continues to illuminate the dangerous consequences we face as a result of centuries — centuries — of racial inequity,” Preckwinkle said. “The victims of the opioid epidemic have been quietly dying around us. We must be their voice to prevent future, needless, preventable deaths plaguing our community.”

Between Jan. 1 and Monday, 773 opioid overdose deaths were logged in Cook County, with 580 more pending cases, Arunkumar said. Given that about 70% to 80% of pending cases are ruled as opioid-related, that means about 1,200 such deaths are expected to be tallied for that time period, Arunkumar said.

Out of the confirmed 773 cases so far this year, 63% of the victims were Black and/or Latino, with 45- to 55-year-old males most likely to die from an overdose, Arunkumar said. Fentanyl, an exponentially deadlier synthetic opioid, was blamed for the majority of cases.

“The numbers tell a grim story,” Arunkumar said about the opioid overdose deaths. “We’ll never get used to the tragedy that each death represents.”

While more analysis needs to be done on the coronavirus pandemic’s effects on opioid deaths, officials worry that the isolation and health scares are keeping people experiencing overdoses from seeking help. Emergency department volumes have decreased since the pandemic started, said Dr. Steven Aks, division chair of emergency medicine and toxicology at Cook County Health.

“What we’d like to say is that it’s safe here. That’s the most important message,” Aks said. “This is extremely alarming with respect to the opioid overdoses. Because for each EMS run that a paramedic brings a patient to the hospital, if they make it to our care they will likely live.”

Dr. Kiran Joshi, senior medical officer at the Cook County Department of Public Health, said a key solution is partnering with law enforcement to “blanket” communities with naloxone, the medication used to reverse opioid overdoses, because the current levels are not “nearly enough.”

On top of the opioid overdose cases, the medical examiner’s office has had to contend with spikes in gun violence homicides this year as well as the surge of deaths from the novel coronavirus. The three crises are pushing the office’s caseload to top 9,000 in the coming days — compared with 6,274 cases in all of 2019, Arunkumar said.

“Desperation and hopelessness” are the underlying causes behind the coinciding upswings in gun violence and opioid-related deaths in Cook County, Preckwinkle said.

“Those are similar causes,” Preckwinkle said. “If you look at opioid deaths and if you look at shootings and murders, you overlay them, right, it’s the same community.”

The medical examiner’s office at first attributed this year’s tidal wave of cases to the coronavirus outbreak, but after digging through the numbers, staffers realized opioid overdoses also were ballooning, Arunkumar said. She added that her office, which investigates certain cases out of the annual 40,000-or-so deaths in Cook County, such as unnatural deaths, are “by and large preventable.”

“While we concentrate on our mission to establish the cause and manner of death for cases that fall under our jurisdiction, we do not accept that they had to occur,” Arunkumar said.

Nagelsmann is the youngest coach in the history of the Champions League to reach the semifinals
Courtois will take the first number in Real Madrid. Lunin will probably get the 13th
Twitter posted a post Name a player better than Phil Jones, then deleted it and apologized
Robbie Williams came up with a form for the club from England's underground. To drive for Port Vale, he gave his song to FIFA 2000 for free
Setien about the match with Bayern: the Game will be equal. Barca has something to say
Olmo scored for Atletico. This is his 1st goal for Leipzig in the Champions League
Xavi: Messi needs Barcelona and Barca needs Leo. If he is happy, the club will win more trophies
Source https://www.chicagotribune.com/news/breaking/ct-cook-county-opioid-deaths-medical-examiners-office-2020-20200714-l52fihc5sbhthlrnr73e22in2a-story.html#ed=rss_www.chicagotribune.com/arcio/rss/category/news/

What Time Will ‘The Legend of Korra’ Be on Netflix?

'90 Day Fiancé' stars Darcey and Stacey Silva talk their new spinoff and dating: 'We go with our heart'

Working From Home? Here Are 7 Ways to Be More Productive.

The Future of the House Republicans Is Fully Unhinged

How to Cycle Up ‘Mount Everest’

LeAnn Rimes on how she 'struggled' with fame until her 30s: 'I was labeled so many things'

Dogs work together to steal leftovers from counter in hilarious video

Stream It Or Skip It: ‘An Easy Girl’ on Netflix, a Steamy, Provocative and Surprisingly Subtle Coming-of-Age Drama

How Chattanooga Is Handling the Census Count Under Covid

Don’t Like What You See on Zoom? Get a Face-Lift and Join the Crowd.

Voting by mail is popular in Florida, despite President Trump's criticisms

Trump, Pelosi, McConnell blame one another as new coronavirus aid package remains out of reach

College students shocked to hear 'Biden' student loan plan is really Trump's: 'I hate him, but that's a start'

Biden, Harris blasted by mainstream media for not taking questions from reporters

Why fans think Chrissy Teigen is pregnant with baby No. 3

'This is what our founders had in mind.' HBCUs celebrate Kamala Harris' vice presidential run

Joe Biden: For The Next 3 Months, All Americans Should Wear A Mask When Outside

Is “The Night They Drove Old Dixie Down” Really a Pro-Confederate Anthem?

The Immoral Double Life of the Former King of Spain

Israel and the UAE will establish 'full normalization of relations,' Trump says

Colton Underwood was medicated for anxiety, depression when 'Bachelor' aired: 'I was struggling hard'

Georgia teen is being persecuted for telling the truth

I Want To Expand My Social Bubble. Should I Get A Coronavirus Test First?

Biden Fires Back at Trump Over Postal Service Funding: ‘He Doesn’t Want an Election’

Can You Catch the Coronavirus from Frozen Food? Experts Say No.

Stream It Or Skip It: ‘Five Bedrooms’ On Peacock, An Aussie Dramedy About Five Single Semi-Strangers Buy A House Together

July 2020 was among the Earth's hottest months ever recorded

Man charged in 2013 slayings of mother, daughter in Clinton Township