Godmen aren't well-perceived in India. That's just a fact. The Tamil show Godman has received an enormous amount of flak in the past few days. Due to its content and take on the Hindu religion it has invited much criticism from the community, offending sentiments.

The show, its creators and cast are now facing an FIR by the Chennai Central Crime branch. After much online pressure, the show was taken down yesterday by ZEE5 Tamil, following intervention by top management after BJP MP Subramaniam Swamy reportedly contacted Subhash Chandra. 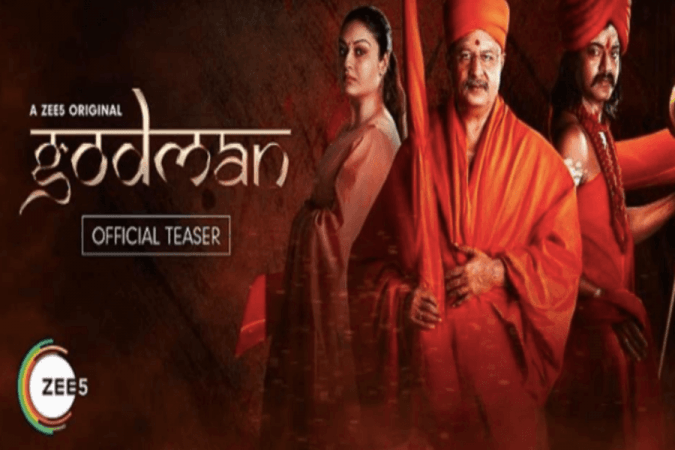 Godman is a highly controversial Tamil show that was going to release on ZEE5. However, now, the show will not be aired due to the severe backlash and mounting criticism on Twitter. The show's take on Brahminism and its portrayal of Brahmins have been called into question.

After many different religious bodies protested the content in Tamil Nadu, the teaser for the series was taken down online. But since then the issue only snowballed, now ensuring that the show never makes it to air.

An FIR has been filed by many religious bodies in Tamil Nadu and BJP Tamil Nadu spokesperson Narayanan Thirupathy against producer Ilango Raghupathy, and director Babu Yogeswaran for promoting enmity between groups. The actors too have been pulled up on social media for their casting- Daniel Balaji and Sonia Aggarwal.

It is reported that ZEE5 took down the show following intervention from Subhash Chandra the owner of the group. BJP MP after receiving calls and pressure from Hindu groups in Tamil Nadu had requested that Subhash Chandra look into the matter.

ZEE5 released a statement announcing the withdrawal of the show, "ZEE5 is a responsible content creator. The platform has been following stringent guidelines when it comes to self-regulating content and has proactively instilled a robust set of features in this regard." 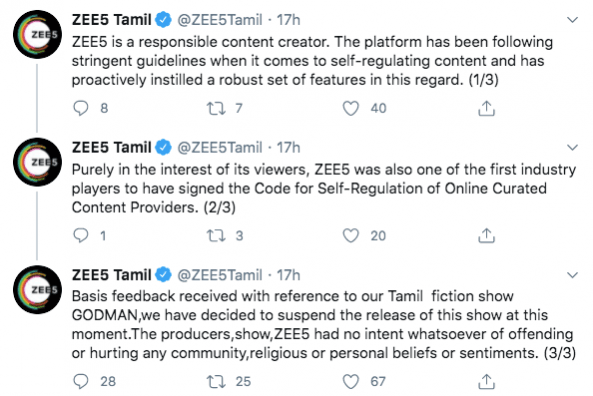 Daniel Balaji while speaking to The Hindu also revealed that he was the target of a lot of online hate, even though he isn't playing the Godman in the series. He said a lot was said about him considering he is named 'Daniel', "You wouldn't believe the kind of comments I received on my Facebook page. When I read them, all I can think is 'How can people mouth such crass words?'. All of this is because of the name Daniel. The abuses were aimed at my mother and sister too."

Often religion is the touchiest of most subjects in India, Godman's run ended even before it began. H Raja the Tamil Nadu BJP leader and National secretary tweeted about the need for censorship.

The cancellation of the proposed series Godman by ZEE5 is welcoming.But the fact that such an attempt to malign a particular community and other Hindu believes cannot be taken lightly. Moreover it was nothing but a soft pornography movie.There is need for censorship of OTT movies pic.twitter.com/1vOUTy47nC

Andujar Oliver on deletions: Fati went too far in the foot, and the foul on the Peak was even more dangerous, perhaps
Atalanta extended the winning streak to 11 matches, beating Sampdoria-2:0
Milner played his 536th game in the Premier League and was ranked in the top 5 of the League in games played
Barca midfielder Fati is removed in the Derby with Espanyol. He spent 5 minutes on the field
Suarez scored 195 goals for Barcelona and finished third in the club's top scorer list
Daniele de Rossi: People call Messi cowardly, but they are afraid to ask their wives for a remote control from the TV
Daniele de Rossi: Ronaldo is comparable to Messi in goals and trophies, but Leo's game is more fun
Source https://www.ibtimes.co.in/controversial-godman-faces-fir-by-chennai-central-police-zee5-withdraws-show-after-intervention-821389

How Georgia’s Stone Mountain Became a Monument to White Supremacy

Alexander Vindman to Retire After Clashes With Trump