Column: Now is the time for ‘Redskins’ to go 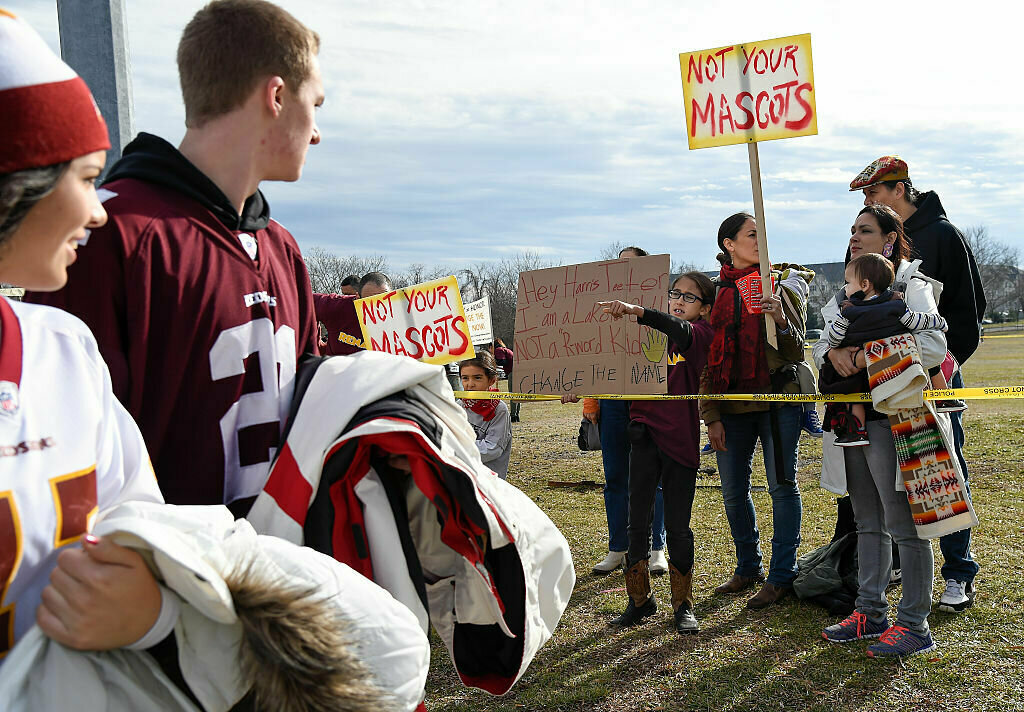 Fans of D.C.’s NFL team walk past Native Americans and supporters protesting the name and logo of the Washington Redskins before a game in Landover, Maryland, on Sunday, Dec. 28, 2014. (Toni L. Sandys/The Washington Post via Getty)

For all its challenges, 2020 has been a watershed moment in U.S. history. The confluence of the coronavirus pandemic and the George Floyd killing have changed this nation, emboldening every American to speak up about racial injustice and make us all evolve into something better.

While the name of a sports franchise is far from the top of the list of racist institutions in America that need to be torn down, the topic still holds a significant place within the current movement, especially to the minorities it affects.

Not to mention it’s definitely easier to change a name immediately than it is to, say, fix inequity in hiring practices.

That’s why it’s so disappointing one of the few minority coaches in the NFL has punted on calling for change within his own organization.

Ron Rivera was asked Monday on 670 The Score’s McNeil and Parkins Show whether his new team should change its name.

Rather than boldly speak the obvious answer for his employer to hear — as many minorities in workplaces across the U.S. have in recent weeks — Rivera deferred.

“It is a discussion for another time … I think it is all about the moment and the timing,” he said.

Though the second part of Rivera’s comment is correct, his sentiment is wrong. There is no better time than now.

Racial justice has more traction than ever before in America. The country has not yet fully emerged from a standstill born of a pandemic.

Washington just spent the month of June purging itself of the legacy of George Preston Marshall, a segregationist and renowned racist.

Dozens of investment firms are pressuring prominent team sponsors to bail on the Burgundy and Gold.

Last week, there was an attempt at a different approach to provoking the change. Fawn Sharp, president of the National Congress of American Indians, made a direct appeal to Washington’s players.

“I am calling for members of the NFL franchise in Washington, D.C., to rise to the occasion and become heroes,” Sharp and Matthew Randazzo wrote in the Washingtonian.

“All I ask is that you state the unequivocal moral truth: just as you would never play for the Washington [insert any other racial slur], you will no longer play for any team branded with a racial slur against Native Americans.

As long as that team name stands, players of conscience should sit at home rather than wear the NFL equivalent of the Confederate flag.”

If that reference in the current climate doesn’t soften Dan Snyder’s dark heart, what will? Does he need a more direct plea from Native Americans? Because that has been happening for decades.

Given his all-caps stance several years ago, Snyder is unlikely to arrive at this decision on his own.

That’s why it’s so important for Rivera, the franchise’s first full-time minority head coach, to take advantage of his honeymoon phase in Washington and have a frank conversation about the team name with Snyder.

And if that doesn’t sway him, respected or celebrated players, past and present — Ryan Kerrigan, Chase Young, Darrell Green, to name a few — should step out on a limb and do what NFL Commissioner Roger Goodell and the team’s sponsors have so far refused to do: Put Snyder in a corner.

Whether he realizes it or not, Snyder is already behind the 8-ball in the history books.

Forget his aura of dysfunction and questionable business practices. Now, he faces an indictment far worse than bad football; without a proactive approach to changing the franchise’s name, Snyder could be remembered in the same vein as Marshall.

“dan snyder’s legacy could become similar to george preston marshall’s — the steward of a team that was better at being racist than playing football.”

Washington isn’t alone in this, either. We’re not even two years removed from the last time Chief Wahoo was seen in Cleveland.

The Kansas City Chiefs and Atlanta Braves should retire tomahawk chops and war cries forever. If fact, I wouldn’t stop at Native Americans — put an end to Notre Dame’s Fighting Irish too.

There’s really no good reason for a race of people to be used as mascots, especially ones adorned with unflattering stereotypes.

Rivera and Snyder should understand that, and shame on them if they don’t.

Reasonable minds aren’t necessarily going to fault every white person currently in power for the centuries-old structure of racism and privilege.

However, those now in power have a responsibility to play a part in evening the playing field and not only righting their wrongs, but also those of their predecessors.

That, and only that, should be the basis for which they are judged.

Snyder wasn’t yet born when the team was named by Marshall, but he has been the steward of the franchise for over two decades — more than long enough to make a change.

As the saying goes, “better late than never” if he decides now to make a positive change that benefits everyone.

Yes, I said everyone. Washington won’t lose money on a name change, and the fans won’t lose the team’s heritage any more than when the Bullets changed their name to Wizards (even if it was a downgrade).

Few people realize Snyder has been sitting on a perfect compromise for nearly as long as he’s owned the team, so if anything, the franchise will probably profit from a name change, especially if it comes with a new stadium in D.C.

But as I’ve stated before, Snyder needs to fall in line with the rest of D.C.’s major professional sports teams and change the name to something that fits the city’s personality and matches the red, white and blue color scheme.

Perhaps that will change the perception of the organization from national disgrace to a functional team worthy to return to the District of Champions.

Super Bowl-winning coach Tony Dungy told The Undefeated, “It’s not hard to change the name.” And while that’s a good quote, the one I took to heart in that link is from the author, William C. Rhoden: “Don’t let Snyder’s lack of morality influence yours.”

I won’t. There was a time I didn’t understand how important this is, but I do now. And given what has happened in this country over the last two months, we all have a responsibility to strive to be better.

So, consider this column’s headline the final time I’ll use the name of Washington’s NFL team in this space. That counts columns I write and my sports reports on air.

I’m done compromising. Snyder, Rivera and the entire NFL should be too.

Ancelotti on the recipe for winning the Champions League: unconsciousness of actions, luck and courage
Werder searches for talent using machine learning and predicts injuries from DNA
Langle about the match with Napoli: We have a very small advantage
Elvin Kerimov: in 2012, Utkin calls: I Read your text on Showsport, since September 1, you are fired
Willian is impressed with Arteta's desire to sign him to Arsenal, but has not yet decided where he will go
Adebayor on Ronaldo: real know what they lost by letting him go. These players appear once every 200 years
At 3 o'clock in the morning, Vasya wrote: Elvin, this is pathetic, monstrous. I am wildly disappointed. Kerimov on criticism from Utkin
Source https://wtop.com/sports-columns/2020/07/column-now-is-the-time-for-redskins-to-go/

Dear Care and Feeding: My 9-Year-Old and I Talk Openly About My Mental Illness. Is That a Mistake?

Sean Penn confirms he and Leila George had a 'COVID wedding'

Blizzard Employees Share Salaries With Each Other to Protest Wage Disparities

“Can I Breastfeed After Being Teargassed?”: Medical Advice for the Protesting Mom

BLM protesters in Seattle claim in suit that expensive gear to protect them from cops prices them out of civil rights: report

Is Outdoor School a Viable Option This Fall? Three Experts Weigh In.

1 Billion Children Have Had School Disrupted Because of Coronavirus, U.N. Chief Says

Irksome in Iceland, brusque in Britain? US envoys draw ire

China state media accuses US of trying to steal TikTok

Teams set for the world's most lucrative football match, worth a possible $346 million

10 ways sleep can change your life

US airlines saw 965% rise in passenger complaints amid coronavirus

The Arc of Homeland Security Bends Toward Trump. Chad Wolf Bends With It.

'It's A Disaster': German Expats Love U.S. But Not Its Handling Of Coronavirus

‘Closing Isn’t Even an Option’: With No Events, Caterers Rush to Adjust

Will the Tea Party Live Again?

Distilleries Raced to Make Hand Sanitizer for the Pandemic. No Longer.

From Outsider to Insider: Karen Bass’s Unexpected Journey to Power

Will Covid-19 Patients in Rural Areas Get the Care They Need?

Distrust of the Minneapolis Police, and Also the Effort to Defund Them

The Mayor Blames the Virus for Shootings. Here’s What Crime Data Shows.

How Ballot Initiatives Changed the Game on Medicaid Expansion