As the college sports world is in chaos, with some teams playing, some dropping out and the Big Ten suddenly changing its mind about playing football this fall, it might get overlooked that there is another slate of games this weekend.

And, partly because of the confusion and cancellations, that slate of games is absolutely terrible.

A fan hoping to forget the state of the world for a while and enjoy some high quality football is going to be at a severe loss this Saturday. Is there even one game worth watching? Let’s look at the lineup.

Only two members of The Associated Press Top 10 are in action this weekend, and neither game seems likely to be an edge-of-the-seat contest.

No. 7 Notre Dame is usually a popular team to root for or against, but how much uncertainty will there be this week against South Florida, a 25-point underdog that finished 4-8 last year?

At least No. 1 Clemson is playing … against The Citadel. Trevor Lawrence, Travis Etienne and company are usually exciting to watch, but their F.C.S. opponent is playing the second of what is expected to be only a four-game schedule. Clemson is a 45-point favorite, and frankly plenty of people will line up to bet them anyway.

Willing to dip a little out of the top 10? No. 11 Oklahoma State and their speedy running back Chuba Hubbard are 23-point favorites over Tulsa. And No. 13 Cincinnati is a 33-point favorite over Austin Peay. Don’t expect surprises. 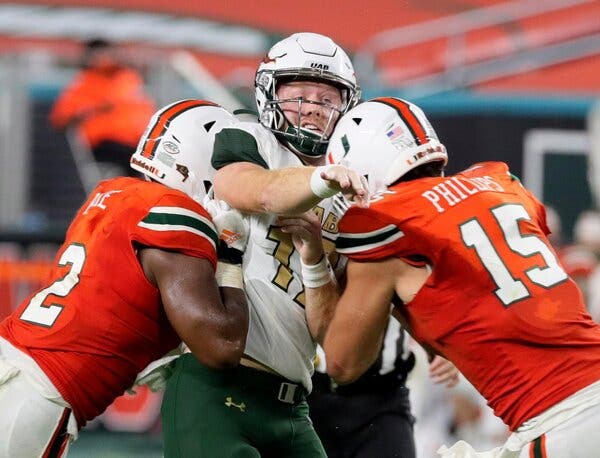 Miami will play Louisville in this week’s only matchup between ranked teams.Credit...Al Diaz/Miami Herald, via Associated Press

“College GameDay” has chosen to travel to No. 18 Louisville and feature its game against No. 17 Miami. It’s the only game between ranked teams this week, so there’s that. But a closer look shows it might be far from a classic. While Louisville was a respectable 8-5 last season, finishing three games behind Clemson in their A.C.C. division, Miami was 6-7, its season culminating in a 14-0 loss to Louisiana Tech in the Independence Bowl.

The Rest of the Rankings

No. 14 Central Florida against Georgia Tech isn’t an awful matchup. Central Florida is a few years removed from when it had actual national title aspirations, but it still has a 35-4 record over the last three seasons. Georgia Tech is coming off a bad year, but it opened the season with a 16-13 victory over Florida State as a 13-point underdog.

Because Big Ten and Pac-12 teams are not currently ranked by the A.P., quite a few lesser lights suddenly are considered “top 25” teams. Though No. 19 Louisiana-Lafayette just defeated Iowa State, its game this week against Georgia State doesn’t set the pulse racing, nor does No. 24 Appalachian State against Marshall.

There aren't any, although a few A.C.C. games are being played. Aside from Miami-Louisville, there’s No. 25 Pitt against Syracuse and Wake Forest-North Carolina State. Not even an A.C.C. fanatic is canceling other plans for those.

Baylor went 11-2 before losing last year’s Sugar Bowl but may have the growing pains of dealing with a new system and staff in 2020.Credit...Brett Duke/Associated Press

Baylor had a problem. Its game against Louisiana Tech had been canceled after an outbreak among Tech players. That left it with no warm-up games before Big 12 play began.

Houston had the same problem. An outbreak at Memphis had caused a postponement of their game this week.

So after some frantic calls and negotiations, Baylor and Houston agreed to face off on Saturday. The deal took days, rather than weeks, to arrange, and was made barely a week before the game, an increasingly common timeline in these pandemic days.

And this shotgun marriage may turn out to be the most intriguing game of the day.

Baylor was 11-2 last year before losing to Georgia in the Sugar Bowl, and again looks like a top-five team in the Big 12.

Baylor doesn’t always schedule tough nonconference opponents, to say the least. Last year its games were against Stephen F. Austin, Texas-San Antonio and Rice, and Baylor beat them by an average of 32 points.

But Baylor may have stumbled into a real game this week. Houston was only 4-8 last year, but that was after essentially giving up on the season and allowing many top players to redshirt after a slow start.

Baylor lost Coach Matt Rhule to the Carolina Panthers and may have the growing pains of dealing with a new system and staff.

Given all that, Houston is only a 4½-point underdog, meaning a close game is more than possible. And there should be scoring. Houston’s Air Raid offense tends to put points on the board, and its defense can give them up. The over/under for the game is 63.

Maybe there’s something to watch on Saturday after all.

Lewandowski has not scored a point in two rounds of the Champions League. Last season, he failed to do so only in the final
Bayern extended their record streak to 13 consecutive wins in the Champions League
Ronaldo will not play Barcelona (Romeo Agresti)
Ole Gunnar Solskjaer: Leipzig impressive progresses. He is aiming for trophies
VAR cancelled out a penalty against Lokomotiv due to an offside move by levandowski
Julian Nagelsmann: Leipzig are confident enough to talk about winning the game against Manchester United
Ronald Koeman: I hope Cristiano will play. The best players should be on the pitch
Source https://www.nytimes.com/2020/09/18/sports/ncaafootball/college-football-weekend-preview.html

Obama Slams Trump: ‘Even Florida Man Wouldn’t Be Doing Some of This Stuff’

13 Best Stocks to Buy If Joe Biden Wins the Presidency

Uzo Aduba to Star in ‘In Treatment’ Reboot at HBO

Marlon James talks about the roots of Black fiction

Pope Francis Advisors Pushing Him To Wear Mask: 'We're Working On It'

Collins votes against Barrett, heads home to save Senate job

Florida added to Chicago’s travel quarantine list this week, Michigan could be next. Here’s what you need to know to avoid a large fine.

Vote early, but don't put that ballot in the mail

Boston mayor urges residents to get tested after coronavirus spike