After skipping President Trump's remarks at the beginning of Tuesday's coronavirus press briefing, CNN avoided the majority of Wednesday's briefing and even slammed the president for what the network described as a "bait-and-switch" with military leaders addressing efforts to combat cartels in Central America.

The network again chose not to air Trump's prepared statements at the beginning of the briefing, cut in briefly to hear remarks from Defense Secretary Mark Esper, but cut away again as the president took questions about the apparent attack that Iran was planning against U.S. troops in Iraq because of the briefing's focus on the administration newly-announced narcotics operations conducted by the military to halt the flow of drugs from coming into the U.S.

"We're going to continue to monitor this briefing and see if they get back to the issue of the coronavirus," CNN anchor Wolf Blitzer told viewers. "That's what we're primarily interested in right now given the horrible numbers that we've been told over the past couple of days maybe 100,000 maybe as many as 240,000 Americans in the coming weeks or months may end up dead as a result of this virus."

While Blitzer repeatedly said that the network was "anxiously waiting" for the arrival of Dr. Anthony Fauci and Dr. Deborah Birx, other CNN personalities took turns to slam President Trump as the briefing was underway. 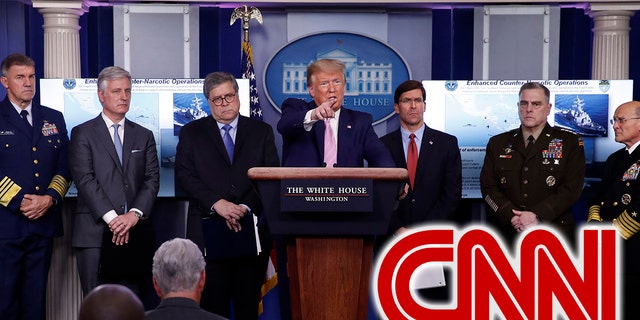 "It is remarkable, and some would say shameless," CNN chief national correspondent John King reacted. "This is a coronavirus task force briefing. The country is in a middle of a pandemic. Americans are afraid. They tune into these briefings to try to get information from the White House. ... You could schedule an event at the Pentagon, at the Justice Department, or in the White House briefing room if you think it's that big of a deal, but call it what it is. Say you have an announcement on the war on drugs. Instead, they walk up into the coronavirus task force briefing and the president is trying to have a bit of a political statement here."

Jim Acosta, reporting outside the White House, called it a "bait-and-switch" since the president has a "built-in audience" who tune in to these briefings. He also claimed that Trump was trying to "play cleanup" at Tuesday's briefing over his handling of the coronavirus outbreak.

The liberal network eventually returned to the briefing as the president was taking questions for reporters and was accompanied by Fauci and Birx as well as Vice President Mike Pence, but cut away again roughly 20 minutes before the briefing wrapped.

On Monday, CNN anchor Don Lemon called for his network to not air the coronavirus briefings live.

"I have said I don't think that you should really listen to what he says, you should listen to what the experts say," Lemon told his colleague Chris Cuomo during their nightly handoff. "I'm not actually sure, if you want to be honest, that we should carry that live. I think we should run snippets. I think we should do it afterwards and get the pertinent points to the American people because he's never, ever going to tell you the truth."

The next day, the network notably skipped Trump's prepared remarks at the beginning of the briefing and aired the rest after Birx took the podium.

The homes of Benfica players were threatened after the attack on the club bus
Have you seen the Loco gun? The ball comes out of it with the same sound as when you hit it, but there is no impact! How so?
Chelsea have agreed to transfer Werner for 60 million euros
Ronaldo dressed up as Aladdin, Georgina as a Power Ranger for the children's birthday
During a 6-hour shift, you can't drink, eat, or go to the toilet. Two monologues from the RPL about doctors who are fighting the virus
APL presented a calendar until July 2. Manchester City and Liverpool will play on this day
Wesley Sneijder: I Could have been like Messi or Ronaldo, but I didn't want to. I enjoyed life, they sacrificed a lot
Source https://www.foxnews.com/media/cnn-avoids-majority-wh-virus-presser

Rep. Anthony Brown on how Trump could heal America, and why he won’t

Stripped of its cultural rites, New Orleans is at a loss for how to mourn Covid-19 deaths