After decades of resisting calls to change their team name, the Cleveland Indians announced on Friday that they were willing to engage in discussions about whether the name is appropriate in the wake of national calls for social justice and reform.

“We are committed to engaging our community and appropriate stakeholders to determine the best path forward with regard to our team name,” the team said in a statement released Friday night.

The announcement came hours after the Washington Redskins of the National Football League made a similar announcement, vowing to undertake a “thorough review” of their team name, which many consider to be a racial slur against Native Americans.

Both team names are considered offensive by many Native Americans, who oppose their heritage’s being used as an identity for sports teams and their mascots.

The news that Cleveland is willing to discuss changing the name was greeted with surprise and enthusiasm from Philip Yenyo, the executive director of the American Indian Movement of Ohio. Mr. Yenyo has been protesting the name since 1991, often in the face of withering abuse from fans as they enter the gates of the team’s stadium on game days.

“Wow,” Mr. Yenyo said on Friday in a telephone interview. “This is a good step.”

Cleveland has used the same name since 1915, often accompanied by a caricature of a Native American, known as Chief Wahoo. The team phased out the Chief Wahoo logo last year, removing it from their uniforms and from walls and banners in the stadium.

The logo was still used on items for sale at the team store last year, however, and Mr. Yenyo called on the club to cease manufacturing such items and selling them in perpetuity.

“We’ve been out there on the street chanting, ‘Change the name, change the logo,’ for years,” he said. “They didn’t seem to hear the first part of that chant, but maybe now they are listening. There are a lot of issues we are fighting, but the name is the main one.” 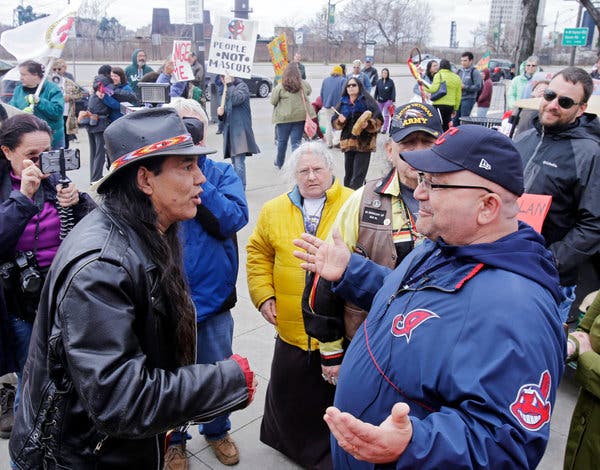 Philip Yenyo, left, talking with an Indians fan before a game in Cleveland in 2015. Credit...Mark Duncan/Associated Press

The Indians have said that the name was originally intended to honor a former Native American player, Louis Sockalexis, who played for the Cleveland Spiders, a major league club, in the 19th century. Some have suggested that Cleveland adopt Spiders as a replacement.

In their statement on Friday, the team cited the “recent social unrest in our community and in our country” — a reference to the nationwide protests in the wake of the killing of George Floyd in police custody in Minneapolis — as spurring its revisiting of the name.

“Our organization fully recognizes our team name is among the most visible ways in which we connect with the community,” the statement said. “We have had ongoing discussions organizationally on these issues.”

The team did not name any specific individuals or groups as the “appropriate stakeholders” it planned to engage, but it could include sponsors and financial partners of the team.

The Washington Redskins’ announcement came a day after FedEx, the company that holds the naming rights to their stadium, asked the team owner Daniel Snyder to change the name.

Many Cleveland fans are emotionally attached to the name, and some will most likely be consulted in the process. A name change is not definite.

Mr. Yenyo said he had been calling team offices for weeks hoping for a meeting, and would like to be included in any discussions.

“We want to be there,” he said. “We have to strike while the iron is hot.”

Manchester United are threatening to pull out of negotiations for Sancho if Borussia do not reduce the price from 120 million euros
Cesc about Casillas: You are a mirror to look into
Lone mascots are another symbol of the year
Casemiro: bale is the top 3 in the world at his best level. But we must admit that he is not in the best shape right now
Ferran Torres: Every player wants to be in the attacking team, and city are one of the most attacking teams in the world
Manchester City have announced the transfer of Ferran Torres from Valencia
German Count Zeppelin, heated underpants and Herbert Chapman. The final that started the great Arsenal of the 1930s
Source https://www.nytimes.com/2020/07/03/sports/baseball/cleveland-indians-name-change.html

Remdesivir made affordable for India; costs ₹4,700 per vial, thanks to Jubilant

These high-waisted Fabletics leggings are a workout must-have

Black SUVs line up for laid-off employees outside NBCUniversal offices

Fulham triumph in world's most lucrative football match, worth a possible $346 million

Why do we still have The Bomb?

Isaias Unleashes Floods and Tornadoes As It Pummels the Atlantic Coast

Rafael Nadal bows out of US Open citing pandemic concerns: 'This is a decision I never wanted to take'

Disney to release 'Mulan' on streaming service, for a price

Trump's Covid-19 testing czar says the government is doing all it can on tests. That's not what the experts say.

When Will ‘The Rain’ Season 3 Premiere on Netflix?

Cardinals Yadier Molina one of 13 members to test positive for COVID-19: 'I look forward to rejoining the team soon'

In age of COVID-19, change is new thing as Detroit casinos reopen

Gov. Whitmer seeks to up the ante on COVID-19 order enforcement with latest mandate

The 15 Best Friends Episodes to Stream on HBO Max

China vows retaliation if US continues 'hostile actions' against journalists

Opinion: Diversity is critical for NFL in devising COVID-19 strategies

Democrats Might Have a Shot at a Kansas Senate Seat

Juan Soto reinstated from COVID IL, but not in Nats' lineup

The Top Food Franchises of 2020

Trump backtracks on his condemnation of mail-in voting, says Florida is an exception

Flint, Michigan, will destroy guns seized by police rather than auctioning them

Coronavirus stimulus: McConnell says any Trump-Democrats deal works for him amid GOP disarray

Tiger Woods will need a miracle at PGA Championship

Browns pleased with “engaged” Beckham so far in camp

Matchbox Food Group, nine of its restaurants file for chapter 11 bankruptcy. These are its largest creditors.

Woke women are the new enemy and other commentary

Ice cream made with liquor is now legal in New York, because sure, why not

Someone Must Have Told Trump Who Lives in Florida, Because He Supports Mail-In Voting There Now