Chris Cornell's memory is being honored by his teen daughter.

A ballad that the late Soundgarden and Audioslave frontman produced for his daughter Toni -- when she was just 12 -- is now being released.

"Far Away Places" was written by Toni three years ago, and was one of the last songs that Cornell recorded before his death in May 2017.

The song was released on iTunes on Thursday and is available on other streaming services.

It is featured in a short film, also titled "Far Away Places," by Tatiana Shanks, a family friend. The movie has been featured in international film festivals, and the song itself has won awards at various film festivals. 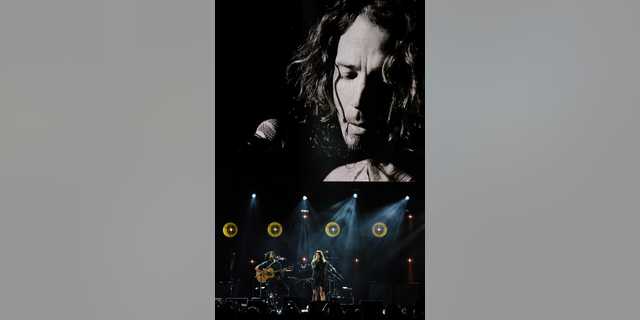 Toni Cornell, daughter of the late singer Chris Cornell, performs with Ziggy Marley, bottom left, underneath a video image of her father during "I Am The Highway: A Tribute to Chris Cornell" (Chris Pizzello/Invision/AP)

Proceeds from the single's sales will be donated to The New York Society For the Prevention of Cruelty to Children.

Cornell's widow, Vicki, also revealed last September that she was releasing a new album titled "Chris Cornell" as well as a four-disc box set on November 16. The box set will contain 11 unreleased tracks. Both projects will include his solo work as well as music made with Audioslave, Soundgarden and Temple of the Dog.

CHRIS CORNELL'S KIDS ACCEPT GRAMMY WIN ON LATE MUSICIAN'S BEHALF: 'WE MISS HIM SO MUCH'

Vicki said the album honors Chris as a "friend, husband and father, the risk taker and innovator, the poet and artist."

Cornell died at 52 years old and his death was ruled a suicide.

The Associated Press contributed to this report

Witzel on Sancho: He is one of the best players of his generation
Favre about Mike Sancho: I didn't see Anything – I can't judge. I don't know why he did it
The championship will resume on June 20
PSV does not plan to buy out Rodriguez. The defender will return to Milan
Bergomi on Icardi's transfer to PSG: Parisians don't have the prestige of Inter
Alan Shearer: I Want Mbappe to play in the Premier League. I see only one club for him – Newcastle
Sancho on a t shirt that says justice for George: We should not be afraid to speak out for what is right
Source https://www.foxnews.com/entertainment/chris-cornell-teen-daughter-releases-song?utm_source=feedburner&utm_medium=feed&utm_campaign=Feed%3A+foxnews%2Fentertainment+%28Internal+-+Entertainment+-+Mixed%29