From the MASSACHUSETTS-ANNEXED
FRONTIER TERRITORY OF MAINE
Cheers and Jeers for July 4, 1776

Note:  Whomever used mine only copy of Common Sense to wipe their hiney in yon shitehouse this morning shall be punished by the switch.  Wretched cur.

Puppy Pic of Thine Day:  General Washington is an avid fox hunter, and his canine of choice is the tireless fox hound: 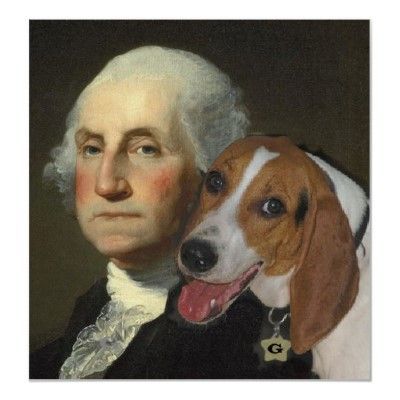 The reason he makes them sleep in the stable and not the master’s manse can be summed up thusly: foxhound SBDs.

CHEERS to the Declaration.  The boys in Congress took a deep breath and drew a helluva line in the sand today.  Britain: trust us, it’s not you. It’s us. Okay, it really is you, but...ooh, this is awkward. Basically: fuck off, with love.  So...what do we do now?  Anyone feel like brunch?

JEERS to the first draft.  Thank goodness "The King may dine on mine knickers" ended up in ye olde trashcan.  Good decision to lay off the hard cider, Jefferson.

CHEERS to Caesar Rodney.  Hearing that the Delaware delegation was deadlocked, he rode 80 miles in wind and rain to reach Philadelphia in time to cast his crucial vote in favor of independence.  We say his horse deserves to have his hoof print on the document, too.

CHEERS to niggling editors.  Thanks to the bone-headed delegates from South Carolina and Georgia (who want to continue importing slaves), and the New England delegates (whose merchants still want to make money helping import them from Africa), language slamming the King for the slave trade was deleted.  C&amp;J disagrees.  But we're sure it will all be solved amicably by...well, certainly by no later than next weekend.

CHEERS to Mr. Loud and Proud.  Rumor has it that Continental Congress president John Hancock was the only delegate who has actually signed the document.  The rest will do so after the "engrossed prints" are ready next month.  The real reason: his signature was such a behemoth they ran out of ink.

JEERS to the Hessians.  For signing on with King George III and committing troops to do his dirty work fighting us. To show our displeasure, German sausage shall henceforth be known as “freedom weenies.”

CHEERS to John Adams: "I am well aware of the toil and blood and treasure it will cost us to maintain this declaration, and support and defend these states. Yet through all the gloom I see the rays of ravishing light and glory. I can see that the end is worth all the means. This is our day of deliverance."  That's inspiring, sir.  But the question was, can we please open a window?

CHEERS to good eatin'.  Yummy yum yum.  Never will there be a time like the present when the food upon which we feast could be more fabulous:

Generally speaking, the food scene in 1776 was built around just a few staples: fat, meat, salt, bread and alcohol. (There's a good reason all the wealthy founding fathers look so plump in those old portraits.)  Fresh vegetables were seasonal, and shellfish—including lobster—was considered "pig food." ...

Colonial cuisine was based on the English model, which meant lots of boiled food and puddings, including pigeon pudding.  Yes, you read that right.  Pigeon pudding.

Does it get any better than that?  I should say not.  At least, not unless they perfect the syrup of the corn and the fat of trans.  Fat chance!

JEERS to the apple falling far from the tree.  William Franklin, illegitimate son of Benjamin and former Royal Governor of New Jersey, was little more than a lap dog for the King.  He's currently under house arrest.  They should paper his walls with the Declaration just to rub it in.  Memo to dad: see what happens when you think with the wrong head?

JEERS to wigs.  In this summer heat, they itch like burlap on buttock.  Can we declare independence from these smelly things, too?

CHEERS to the women.  Not only are they keeping our homesteads maintained in our absence, they're also pretty good in a skirmish.  And there even seems to be a certain time of the month when they can heave cannonballs with bare hands at great velocity.  Amazing.  Perhaps we should grant them a right or two one day.  Perhaps.

CHEERS to beating back the skeptics.  Worrywart delegate John Dickinson says independence is premature: "It'll be like destroying our house in winter and exposing a growing family before we have got another shelter."  Yeah, well, the current landlord is a petulant loopdee-doo so...potato puhtahto.

JEERS to the Grand Union Flag.  Look, I'm not saying it's bad or anything.  The 13 stripes are creative—one for each colony an' all that.  But the British emblem sticks in my craw.  Whaddya all think about maybe some stars?  I know a good seamstress in town who can churn 'em out with a single snip.

CHEERS to the music makers.  It takes a lot 'o guts for our regiment musicians to walk around the field of battle tootin' and tappin' while hot lead is whizzing by their heads.  Yankee Doodle always rallies the troops, although I'm partial to the lesser known…

Just one minor quibble.  Love the fife…love the drum.  But would you mind adding a little more cowbell?

JEERS to "Female Combatants."  This British political cartoon actually says, "I'll force you to obedience, you rebellious slut" and features womanly nakedness.  Can the "lamestreameth media” possibly sink any lower?

CHEERS to Market and Seventh Streets.  The brick house on this corner in Philadelphia is where Delegate Jefferson spent most of his time writing the Declaration.  When he moved out, the maids were cleaning his room for days. (His way with words is as precise as his aim around a piss bucket is not.)

CHEERS to the bottom line.  Hancock: "We must be unanimous; there must be no pulling different ways; we must hang together."  Franklin: "Yes.  We must all hang together or most assuredly we shall all hang separately.”  Us: Gulp.

CHEERS to going out together.  On July 4, 1826—50 years to the day after the first delegate signed the Declaration—both John Adams and Thomas Jefferson died within hours of each other (Jefferson went first, thus making Adams' final words—"Jefferson survives"—a bit awkward).  Pay your respects to J.A. here and to T.J. here.  And pray that one day we're fortunate enough to have statesmen like them running this place again.  (Minus the slaveholding and Alien &amp; Sedition Acts.  Ahem...)

Yon creaky floorboards be open...What are ye cheering and jeering about today?

Gattuso on Pirlo's appointment in Juve: All right, he got it. Being a player and a coach are different things
Sergi Roberto on the Barcelona-Bayern match: It will be like the final
David Silva has agreed a 3-year contract with Lazio for 9 million euros. He will leave the city for free
Mertens Pro 1:3 with Barca: after Langle's goal, Napoli forgot how to play
Muller before Barca: anything can happen in a match of this level
Mammana about moving to Sochi: I will Try to achieve a lot with this great club
Chakyr should not have counted Langle's goal. Ex-referee Andujar Oliver on the Barcelona-Napoli match
Source https://www.dailykos.com/stories/2020/7/3/1957763/-Cheers-and-Jeers-July-4-1776-Edition