The Centers for Disease Control and Prevention (CDC) has debuted a color-coded system for identifying cruise ships based on their recent history of COVID-19 infection.

The system, which is currently outlined on the CDC’s website, will be utilized to grade cruise ships under U.S. jurisdiction, the results of which will be published sometime this week, the Miami Herald reported.  The results will also be published alongside each cruise line’s plans for maintaining the health and safety of passengers and crew, to be instituted once sailing finally resumes following months of suspensions from the coronavirus health crisis.

In accordance with the new color-coded grading system, ships that have reported no confirmed cases of COVID-19 or similar illnesses for the past 28 days will be designated with “Green” status, per the CDC. Those that have had one or more suspected cases will be “Yellow,” pending confirmation. And finally, “Red” will be designated for ships with one or more confirmed cases within the past 28 days. 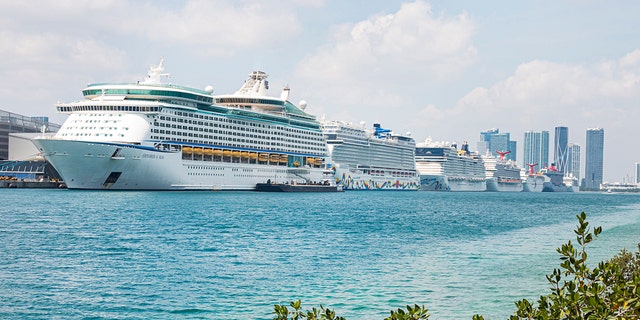 The system is being used to determine whether any asymptomatic crew members remaining on certain ships will be allowed to use specific facilities, such as gyms or meeting rooms (which are not required to close on "Green" ships) or whether they still need to remain in their cabins during non-work hours. (Jeffrey Greenberg/Education Images/Universal Images Group via Getty Images)

The system is being used to determine whether any asymptomatic crew members remaining on certain ships will be allowed to use specific facilities, such as gyms or meeting rooms (which are not required to close on "Green" ships) or whether they still need to remain in their cabins during non-work hours. The system will also be used to determine whether any remaining crew members who are currently awaiting repatriation will be allowed to travel home via commercial transportation. Only those aboard ships that meet the “Green” criteria can be repatriated via commercial transportation; those on “Yellow” or “Red” ships must use non-commercial transportation.

“This guidance and the commercial transportation attestation are only applicable to cruise ship operators with a complete and accurate No Sail Order response plan for crew management and for their ships that have met CDC’s criteria for a ‘Green’ ship,” the agency writes.

Under the CDC’s latest “No Sail” order, issued on April 9, the agency required cruise lines to submit their plans for the further prevention of COVID-19 to both the CDC and the U.S. Coast Guard, including plans for responding to further outbreaks with “limited reliance on state, local, and federal government support.”

Those plans will be publicly revealed this week, The Miami Herald reported on Wednesday.

The outlet further said that its own investigation into cruise-linked outbreaks had turned up 63 ships — or “nearly one-fourth of the global ocean cruise fleet.”

At the beginning of May, it was also reported that more than 100,000 crew members were still either quarantined, working, or awaiting repatriation aboard ships stationed off the coast of the U.S. The Herald reported that several thousand have since been transported home, although it’s unclear how many currently remain onboard ships. A representative for the U.S. Coast Guard was not immediately available for comment.

Zidane wants to see Mane at Real Madrid, but the club cannot afford this transfer
Manchester United and Manchester City have made inquiries about Griezmann. Barcelona does not want to let him go
Alaba and Coulibaly, among the purposes of the transfer of Guardiola. He wants to start rebuilding at Manchester City
The new Chelsea uniform is inspired by London tailors. With the logo Three, Lampard's team immediately missed out on three from West ham
Hakimi on racism: Everyone should talk about it, not just the players. Everyone needs equal rights
Zidane on La Liga: there are six finals Left. We are fine, but it doesn't mean anything
The drunk at the party in honor of the transition to Barca was crying with happiness on his father's shoulder
Source https://www.foxnews.com/travel/cdc-color-coded-system-identifying-cruise-ships-covid-19-cases