Cate Blanchett revealed a frightening medical scare she suffered while in quarantine at her home in England.

The Australian actress and mother of four joined Julia Gillard, the former Prime Minister of Australia, on her podcast last week, where she was asked about her time spent in quarantine amid the coronavirus pandemic.

Aside from helping out her children with their schoolwork following school closures, she revealed some details about the close call but stressed it wasn't as serious as it sounds. 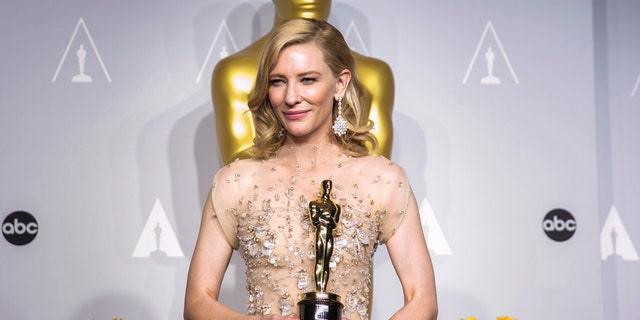 Blanchett at the 2014 Academy Awards. (Reuters)

"I had a bit of a chainsaw accident yesterday which sounds very, very exciting but it wasn't," Blanchett, 51, said on "A Podcast of One's Own with Julia Gillard."

"Apart from the little nick to my head, we're fine," Blanchett assured the host without revealing exactly what she was doing with the mechanical tool.

"Be very careful with that chainsaw. You've got a very famous head," Gillard responded. "I don't think they will want to see any nicks taken out of it."

"I know I want to keep it on my shoulders!" Blanchett said with a laugh.

The Oscar-winning actress shared that she had taken the year off to help support her eldest son with his schoolwork. Now, however, she joked that she's "left with an 18-year-old who doesn't want really to have anything to do with me!"

Blanchett said, like many others, life is "a little bit discombobulating" at the moment, but she knows that's a "high-class problem."

Playing teacher to her kids – she also transitioned to "being a kindergarten teacher" to her 5-year-old – has left her thinking about the importance of educators and what they should be getting paid.

Blanchett commended Finland in particular for paying its teachers "the same as lawyers and doctors." She said she hopes countries come out of the global pandemic with more appreciation and funds for teachers.

"I have a huge respect for the teaching profession," Blanchett said, adding, "I hope out of this that teachers' wages will be increased and their respect will be amplified by COVID-19."

Barca presidential candidate Font: Messi is a one-club man. Barcelona and Leo should always be together
Manchester City wants to buy Ferran Torres from Valencia. Guardiola sees him as a replacement for Sana
Nacho returned to training in the General group of Real Madrid
Neymar will stay at PSG. Barcelona can't buy him because of money problems, Real Madrid refused a transfer last summer
Diamond in the center of the field: approximate line-up for the match with Valladolid
Stefano Pioli: Milan doesn't want to be seventh in the table. We are trying to change the situation
Solskjaer: Manchester United is always about winning. Fearless play from a position of strength is the DNA of our club
Source https://www.foxnews.com/entertainment/cate-blanchett-head-injury-chainsaw-accident?utm_source=feedburner&utm_medium=feed&utm_campaign=Feed%3A+foxnews%2Fentertainment+%28Internal+-+Entertainment+-+Mixed%29

Brooklyn Beckham and Nicola Peltz Are Engaged: See Her Ring

Coronavirus vaccine should reach those who need it, not highest bidders: Bill Gates

Senate Democratic candidates are raising tons of money. That matters.

Is 7-Eleven free Slurpee day happening? Kind of — here’s what to know