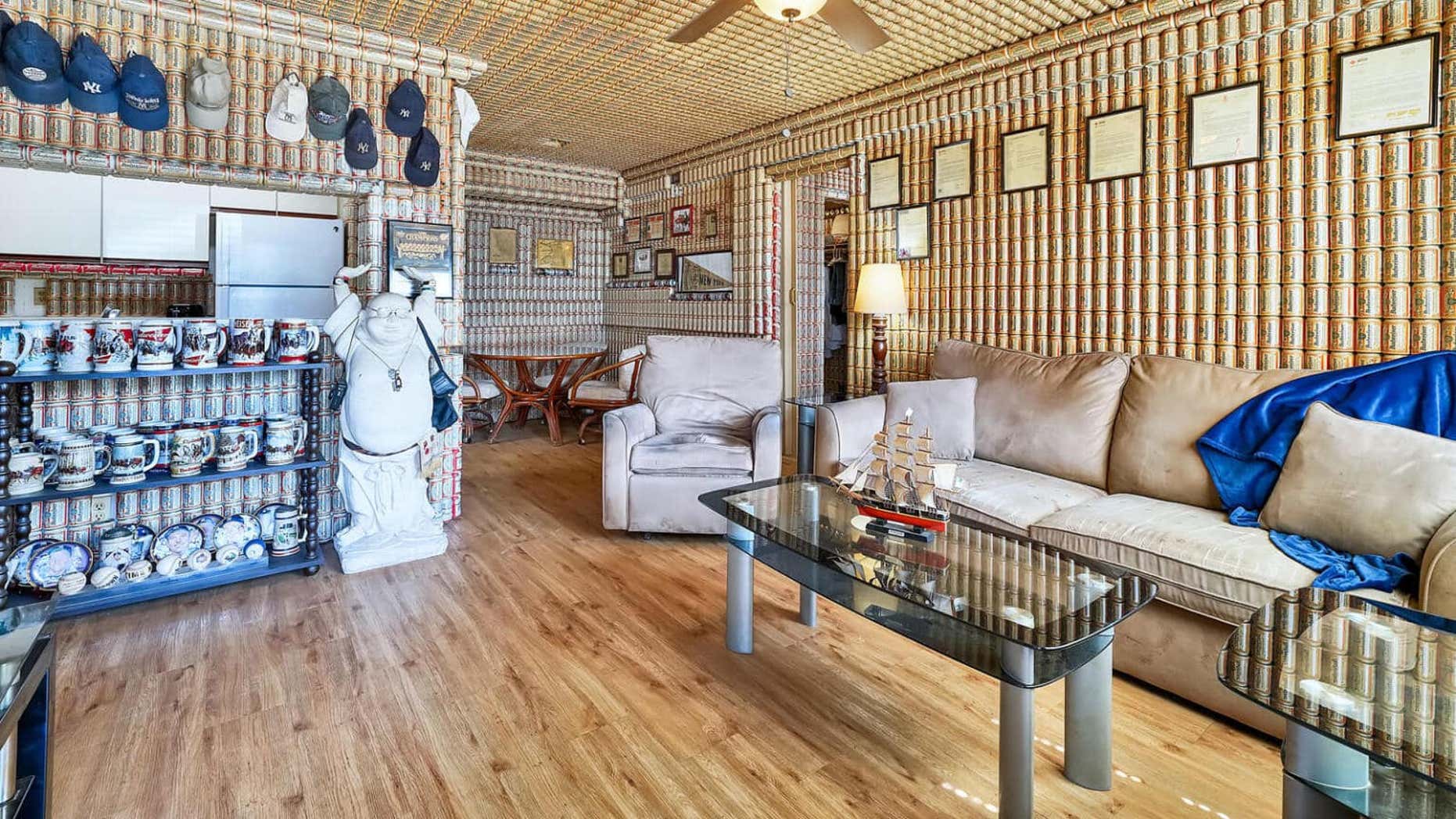 The home was originally designed as part of a U.S. Navy Veteran's beer can project, which he began in 1990. (Kearney & Associates Realty)

Crack open a cold one – as long as it’s not attached to the wall.

A unique home has hit the market in South Florida with a design aesthetic that reads part condo, part college frat house.

The 2-bedroom, 2-bathroom condo boasts 815 square-feet of space, and are nearly all covered floor-to-ceiling with Budweiser cans.

According to photos of the home, which is listed by Kristin Adams-Kearney with Kearney & Associates Realty, show a quaint living room, which flows into the dining room and a galley kitchen – all of which boasts walls and ceilings entirely of stacked cans of Bud. Apparently there are only two locations with can-free walls, and those are the bathrooms.

Though the home decorating is up to the new owner – the property recently went into escrow – Budweiser, feeling protective of the intricate display is offering a deal that would make any beer lover (and probably permanent bachelor) smile.

The beer brand is offering to stock the fridge in the "House of Budweiser" with Budweiser beer as long as the owners “don’t renovate.”

The home was listed for $100K and was purchased “following a bidding war,” a spokesperson for Budweiser told Fox News.

According to the beer brand, the new owner has yet to respond to the “generous offer.”

The original home was designed by U.S. Navy Veteran Michael Amelotte. He started the beer can project in 1990, four years after he moved into the home.

“It took him 16 years to consume enough beverages and finish this project,” the Facebook post from Kearney & Associates Realty reads. “This was a labor of love with extreme attention to detail as he painstakingly covered all of the walls and ceilings.”

“He even created crown molding and use different sizes of cans to accommodate electrical outlets and the A/C vents,” the post adds.

Everton lost for the first time in the season, but remains first in the Premier League
Hazard was included in Real Madrid's bid for the match against Borussia Monchengladbach
Pele: When they play football on the moon, I will fly to kick the ball a little
Newcastle have signed a Frenchman who worked on a construction site in Australia a year ago. The guy came to view and scored through himself
Hans-Dieter flick: Sane worked with Klose, it was good for him. Bayern are happy with Leroy
Paulo Fonseca: Juventus and Inter claim the scudetto. But Serie A is balanced
Benzema on Khabib: the Greatest in history
Source https://www.foxnews.com/real-estate/budweiser-house-for-sale-viral

Steelers Vs. Titans Live Stream: How To Watch NFL Games Live On CBS

The Supreme Court’s Legitimacy Is Now in Question

The Third Wave of COVID-19 in the U.S. Is Officially Worse Than the First Two

Lee Kun-hee, Who Built Samsung Into a Global Giant, Dies at 78

White House chief of staff: ‘We’re not going to control the pandemic’

Will I be passed over for work since I’m 65 and vulnerable to COVID-19?

After tight 2016 race, Pennsylvania poised to be linchpin to election win

Markle slammed as ‘privileged princess’ for lack of perspective

AP source: Raiders get 4 linemen back for game vs. Bucs

The 2020 presidential election reaches the homestretch

The Latest: Pelosi says she’s not giving up on virus relief

Texas boy, 3, dies after accidentally shooting himself in the chest at birthday party

At least 5 people in Pence's orbit, including chief of staff Marc Short, are positive for coronavirus

An all-Black group is arming itself and demanding change. They are the NFAC

Kohli’s 50 in vain as Chennai beats Bangalore in IPL

Boy, 3, dies after accidentally shooting himself at own birthday party

White House chief of staff: 'We are not going to control the pandemic'

Rock star Stevie Nicks, in her own words

‘The Great British Baking Show’: Linda Had to Go, But it Still Sucks

Did Donald Trump deliver to voters with that last debate performance?