Box office: 'Good Boys' is the biggest original comedy opening of the year

Despite five new wide releases opening this weekend, only one managed to make an impression at the box office.

Produced by Seth Rogen and Evan Goldberg, “Good Boys” stars Jacob Tremblay, Keith L. Williams and Brady Noon as three precocious 12-year-old boys getting ready for their first kissing party. Directed by Gene Stupnitsky in his feature directorial debut, it was well-received with a B+ CinemaScore and an 80% “fresh” rating on review aggregation site Rotten Tomatoes.

Universal has distributed the biggest original comedy openings of the past three years with this film, including last year’s “Blockers” ($20.5 million) and “Night School” ($27.2 million) and 2017’s surprise hit “Girls Trip” ($31.2 million). The latter two films were the highest-grossing domestic comedies of their respective years.

The studio now matches Disney with six films that have opened at No. 1 this year: “Good Boys,” “Glass,” “Us,” “How to Train Your Dragon 3,” “Secret Life of Pets 2" and “Fast & Furious Presents: Hobbs & Shaw.” Its films have also spent a total of 10 weeks at the top of the domestic box office and have crossed the $1-billion milestone domestically, rivaling only Disney.

In second place, Universal’s “Hobbs & Shaw” added $14.1 million in its third weekend for a cumulative $133.7 million. Globally, the film has reached $437 million in worldwide receipts.

In fourth place, Sony’s “The Angry Birds Movie 2" earned $10.5 million over the weekend after opening on Tuesday for a cumulative $16.2 million. It was well-received with a B+ CinemaScore and a 76% “fresh” rating on Rotten Tomatoes, but fell well short of its predecessor’s $38.2-million opening in May 2016.

Rounding out the top five, CBS Films, eOne and Lionsgate’s “Scary Stories to Tell in the Dark” added $10 million in its second weekend (a 52% drop) for a cumulative $40.2 million. 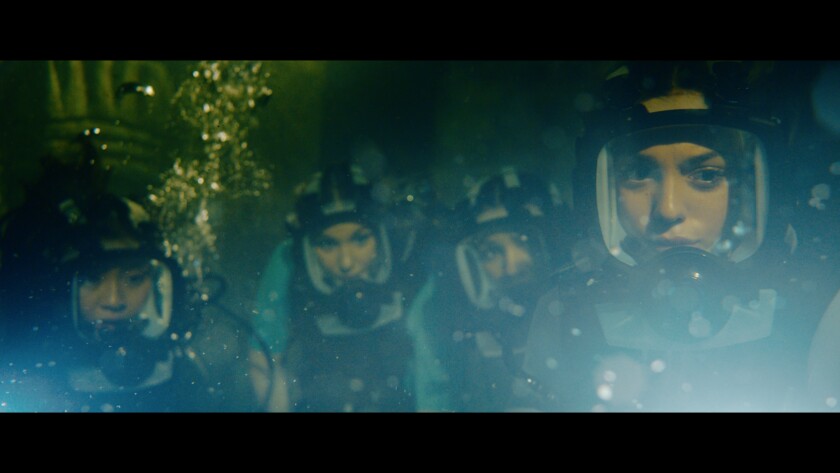 At No. 6, Entertainment Studios Motion Pictures’ “47 Meters Down: Uncaged” opened below expectations of $11 million to $14 million with $9 million. It earned many negative reviews with a 50% “rotten” rating on Rotten Tomatoes and a C+ CinemaScore . Its predecessor “47 Meters Down” opened with $11 million in 2017 on its way to $44 million.

In seventh place, Paramount’s “Dora and the Lost City of Gold” added $8.5 million in its second weekend, a 51% drop, for a cumulative $33.9 million.

In ninth place, Warner Bros.’ and New Line Cinema’s “Blinded by the Light” opened with $4.4 million.

Directed by Gurinder Chadha (“Bend It Like Beckham”), the film follows a Pakistani teenager in Britain who turns to the music of Bruce Springsteen to cope with racial and economic turmoil. Despite the poor box office result, it was well-received with an A- CinemaScore and a 90% “fresh” rating on Rotten Tomatoes.

Opening outside of the top 10, Annapurna and United Artists Releasing’s “Where’d You Go, Bernadette” opened with $3.4 million.

Directed by Richard Linklater, the film stars Cate Blanchett as an agoraphobic mother who suddenly goes missing on the eve of a family vacation to Antarctica. It earned tepid reviews with a B CinemaScore and a 43% “rotten” rating on Rotten Tomatoes.

In limited release, Sony Pictures Classics opened “Aquarela” in five locations to $23,474 for a per-screen average of $4,693 and the Cinema Guild opened “End of the Century” in one location to $10,398.

Trafalgar Releasing’s BTS documentary “Bring the Soul: The Movie” added $190,407 in its second weekend across 341 locations for a per-screen average of $407 and a cumulative $4.7 million.

Malaysia’s Mahathir says he has support to return as PM

Harvey Weinstein 'not giving up on life,' according to spokesman

Dems joust with Pompeo at hearing, the 1st since impeachment

This arrest shows you what virus China’s rulers truly fear

In South Carolina, Generational Divide Is Clear Among Black Voters

Trump suggests his supporters vote in another Democratic primary, this time in South Carolina