Borat is making his way back to a screen near you -- and Vice President Mike Pence's name appears to be used in the title.

Actor Sacha Baron Cohen is returning as the controversial character he played in the 2006 film “Borat! Cultural Learnings of America for Make Benefit Glorious Nation of Kazakhstan." The original film, written and produced by Cohen, follows the titular character, a Kazakh television personality, as he explores America.

Amazon plans to release the film before the 2020 presidential election.

The streaming giant confirmed Tuesday that it has acquired worldwide rights to the film. It's reportedly titled: “Borat: Gift of Pornographic Monkey to Vice Premiere Mikhael Pence to Make Benefit Recently Diminished Nation of Kazakhstan.” 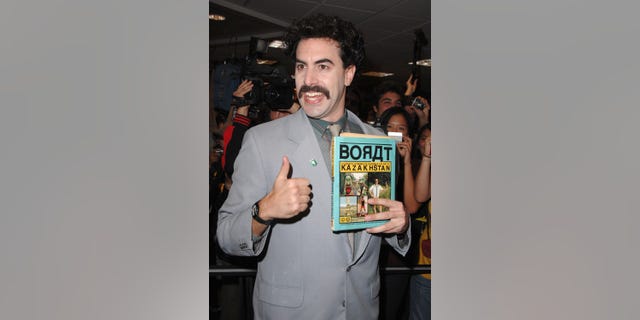 Reports have steadily accumulated about the project throughout the summer as it was filmed in secret during the pandemic.

SACHA BARON COHEN CREDITS DONALD TRUMP FOR 'WHO IS AMERICA?'

The 2006 film, directed by Larry Charles, grossed $262 million worldwide and was nominated for best adapted screenplay at the 79th Academy Awards.

Cohen ended up winning the 2007 Golden Globe award for best actor in a musical or comedy.

Hans-Dieter flick: I Hope Alaba will sign a contract with Bayern. Our club is one of the best in the world
Diego Maradona: Messi gave Barca everything, brought them to the top. He was not treated the way he deserved
Federico Chiesa: I hope to leave my mark in Juve. We will achieve great results
The Coach Of Benfica: I don't want us to look like the current Barcelona, it has nothing
Guardiola on returning to Barca: I'm happy at Manchester City. I hope to stay here
Fabinho will not play with West ham due to injury
Ronald Koeman: Maradona was the best in his time. Now the best Messi
Source https://www.foxnews.com/entertainment/borat-sequel-pence-amazon?utm_source=feedburner&utm_medium=feed&utm_campaign=Feed%3A+foxnews%2Fentertainment+%28Internal+-+Entertainment+-+Mixed%29