After eluding the law for decades, eccentric New York real estate heir Robert Durst is finally set to stand trial for the murder of his best friend in California nearly 20 years ago.

Jury selection is expected to begin Wednesday, and Durst is charged with one count of murder of Susan Berman, the daughter of a prominent Las Vegas mobster, who was found shot in the back of the head at point-blank range in her Los Angeles home on Dec. 23, 2000.

The bizarre billionaire's life has been shrouded in suspicion and controversy since the day his wife Kathleen vanished in a New York suburb in 1982. Her body was never found, but investigators presumed her dead and suspected Durst as the killer, although he was never charged.

Berman fiercely defended Durst throughout the media frenzy that followed his wife's disappearance, and prosecutors said Durst later killed her to keep her from revealing what she knew about Kathleen's demise.

Following his wife's death, Durst left New York and disguised himself as a mute woman to feign anonymity, prosecutors said.

He later was arrested in October 2001 on charges that he murdered and dismembered his elderly neighbor, Morris Black, in Galveston, Texas. Black also was the landlord to his $300-a-month rental room.

A jury eventually acquitted Durst in 2005 after his attorneys argued self-defense. 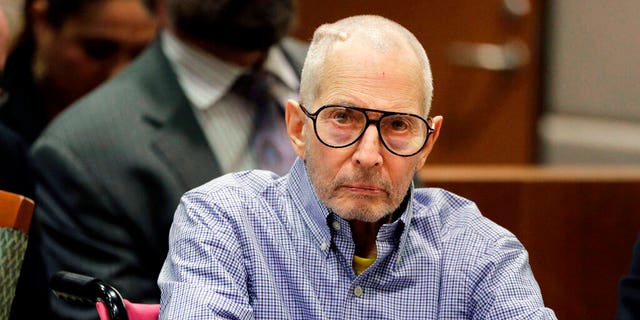 This time, prosecutors have been determined to nab Durst, 76, based on a slew of circumstantial evidence, including a cryptic note sent to police with Berman's address on it that read “CADAVER,” which prosecutors said Durst wrote. The address on the note misspelled the location -- Beverly Hills -- as “BEVERLEY,” written in block letters with the same spelling error identical to a previous letter Durst wrote to Berman when she was alive.

The discovery was made as Durst participated in a 2015 multipart docuseries with HBO filmmakers entitled "The Jinx: The Life and Deaths of Robert Durst."

In the series, he was presented with the note on camera and denied writing it, but said, "only the killer could have written" it. Yet, Durst was unable to distinguish between the note and a letter that he had written prior to that.

He blinked, burped and put his head in his hands before denying being the killer. After the interview, he went to use the bathroom unaware that he was still wearing a microphone. Filmmakers said they didn't realize until two years later as they were editing the film that they captured audio of him in the bathroom.

The film ended with Durst's voice: "You're caught! What the hell did I do? Killed them all, of course."

However, what seemed like a bombshell confession actually had been edited by filmmakers, combining all three phrases into one sentence.

Prosecutors are expected to introduce testimony from former friends of both Durst and Berman, who said Berman was afraid of him because he confided to her that he had abused then killed Kathleen so many years ago.

'Who the h*** are you?': Kareena Kapoor lost her cool at Dia Mirza [Throwback]

The Trump administration's response to coronavirus could make the recession worse

How coronavirus is deepening American inequality

Should Donald Trump listen to Dr. Anthony Fauci -- or his trade adviser?

More than 10,000 people in the US have died from coronavirus. And officials say this will be the most challenging week yet

How to maintain a healthy relationship while living in self-isolation

No shining moment evokes an all-too-familiar feeling for fans: Loss

Milken conference, already postponed by virus, is pushed to October

Inside the frenzied campaign to get coronavirus supplies to California. Will it be enough?

CBS' 'All Rise' to produce coronavirus episode at a distance

Navy secretary rips Capt. Brett Crozier for his warning about coronavirus aboard ship

Virus is mostly mild and rarely fatal for US kids, data show

NHL playoff scenarios run the gamut of where, when and how

Domestic abuse calls up 25% in U.K. since start of coronavirus lockdown

Livestreaming Funerals: Is This The New Norm?

Beware: '4G VPN for JK' promises high-speed internet in Kashmir, but it's a trap

Pelosi forges ahead with 4th coronavirus relief bill despite naysayers

'The Fastest Shedder,' the reality show fighting obesity in Nigeria

As We All Shelter from Coronavirus, Times Opinion Columnists Chat With Readers

Your how-to guide to making group FaceTime calls, and how to spice them up

Step up your sneaker collection with 25% off all Nike footwear

This cute kitchen organizer frees up your counter space

Some abortion services in Ohio will be halted, judges rule

ATX TV Festival is going virtual because of coronavirus pandemic

Brazil’s President Still Insists the Coronavirus Is Overblown. These Governors Are Fighting Back

DeSantis to Churches: ‘Keep God Close’ but ‘Keep COVID-19 Away’

States urge US to allow SNAP recipients to grocery-shop online

Wisconsin governor orders delay in Tuesday's Supreme Court election, but GOP will fight it in court

This Week’s ‘Supermoon’ Will Be Closer to Earth Than Usual—But at Roughly 220,000 Miles Away, It’s Still Appropriately Socially Distanced