Belarus’ top opposition leader has fled her country after disputing the results of the presidential election and amid a police crackdown on those protesting authoritarian President Alexander Lukashenko.

The 37-year-old former English teacher had dismissed the official results of Sunday’s election showing Lukashenko, who first took charge of the ex-Soviet nation in 1994, winning a sixth term with 80% of the vote, while Tsikhanouskaya got 10%.

“We don’t agree with (the election results); we have absolutely opposite information,” Tsikhanouskaya told the Associated Press on Monday. “We have official protocols from many poll stations, where the number of votes in my favor are many more times than for another candidate.”

However, after submitting her formal demand for a recount to Belarus’ Central Election Commission, Tsikhanouskaya addressed her supporters in a video message.

She said: “I have made a decision, I must be with my children,” whom she had previously sent to an unspecified European country after receiving threats. 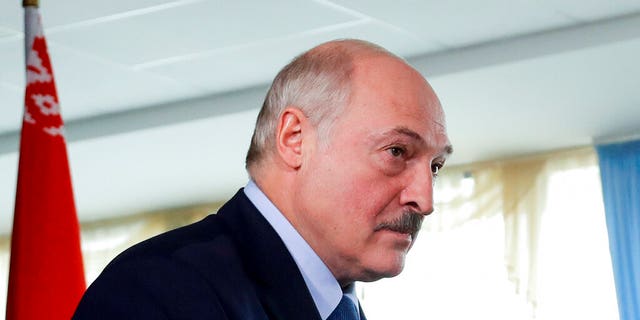 Belarusian President Alexander Lukashenko walks after voting at a polling station with a Belarusian national flag on the left, during the presidential election in Minsk, Belarus, Sunday, Aug. 9, 2020. (AP Photo/Sergei Grits)

Tsikhanouskaya was thrust into the political arena without any prior experience. She entered the race after her husband, an opposition blogger who had hoped to run for president, was arrested in May.

She has managed to unite fractured opposition groups and draw tens of thousands to her campaign rallies — the largest opposition demonstrations in Belarus since the 1991 collapse of the Soviet Union.

Thousands of opposition supporters protested the election results for two straight nights in several Belarusian cities even after rumors circulated that Tsikhanouskaya had left the country.

Lukashenko derided the opposition as “sheep” manipulated by foreign masters and vowed to continue the tough crackdown on protests despite Western rebukes. 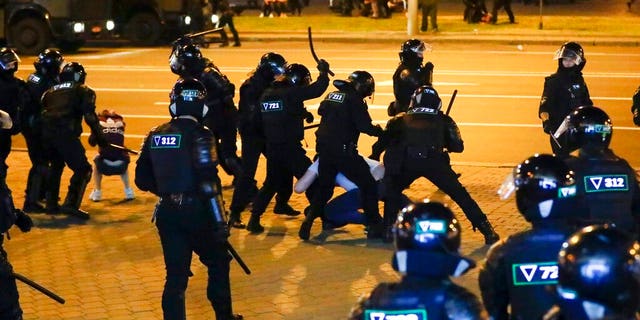 A protester died Monday amid the clashes in Minsk and scores were injured as police used tear gas, flash-bang grenades, and rubber bullets to disperse the demonstrators. Interior Ministry spokesman Alexander Lastovsky said the victim intended to throw an explosive device, but it blew up in his hand and killed him.

The police crackdown on protesters drew harsh criticism from the European Union and the United States and will likely complicate Lukashenko’s efforts to mend ties with the West amid tensions with his main ally and sponsor, Russia.

U.S. Secretary of State Mike Pompeo said in a statement that the election was not “free and fair,” and added: “We strongly condemn ongoing violence against protesters and the detention of opposition supporters.”

Roy Keane: for Solskjaer, the honeymoon at Manchester United is over, the pressure will grow. Need a trophy
Dembele was late for Barcelona training. Koeman demands to arrive at the base an hour before class
Chris Waddle: I Don't see Manchester City Winning the Premier League this season
Lewandowski and Kuizans laughed at rumors of a conflict in training
Kevin-Prince Boateng signed a contract with Monza Berlusconi until the end of the season
Ex-Manchester United player Raphael: van Gaal is one of the worst people I've worked with. I was told that he doesn't like Brazilians
Rebic dislocated his elbow and may miss several Milan matches
Source https://www.foxnews.com/world/belarus-opposition-leader-flees-lithuania-presidential-election

Trump's taxes tell a tale of debt and desperation

Former US Ambassador to Ukraine to be honored by PEN America

Beauty brand drops a fresh spin on the toothpaste pimple hack — "I’ve tried a lot of different spot treatments, but this one is the best"

‘Real Time With Bill Maher’ Renewed At HBO Through 2022

Chiefs vs. Ravens line, prediction: Why Under is the smart bet

Director Joe Mantello Delivers An All-Star ‘The Boys In The Band’ To Netflix & The 21st Century: Here, He Talks How, Why And The Uncanny Instincts Of Producer Ryan Murphy – Q&A

Help! My Outraged Mother Won’t Talk About Anything Other Than Politics.

Will Smith Gives a Tour of The Fresh Prince of Bel-Air Mansion: Go Inside

Oceans are out of balance — and that means stronger storms

Keto diet could be bad for your heart, researchers say

Commentary: We need to talk about those Breonna Taylor T-shirts

Could the presidential race be decided by Nebraska’s second congressional district?

Fact-Checking Fargo: How Bad Was Anti-Italian Racism in the 1950s?

Which states can see the Northern Lights tonight?

Dozens of California wineries under threat from latest wildfire

Sophia Hutchins and Caitlyn Jenner in talks to join ‘RHOBH’

The Latest: Qualifier in French 2nd round after 6-hour win

Alarming Data Shows a Third Wave of COVID-19 Is About to Hit the U.S.

Not much went right in disappointing season for Diamondbacks

Select DC schools welcoming some students back this week

Fact-check: No, Nandi idol desecration in Chittoor not due to communal conflict