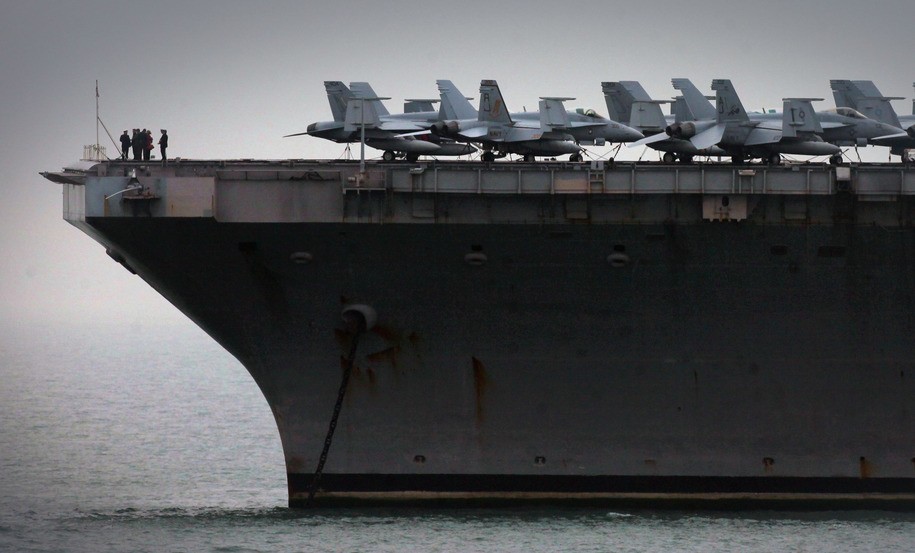 Over the weekend, The New York Times reported that former Navy commander Captain Brett Crozier has tested positive for the novel coronavirus. Why is this particularly big news? Crozier was the commander of the USS Theodore Roosevelt, an aircraft carrier now ported in Guam, who went viral last week for sending a four-page memo to internal leadership asking for support for his crew as the number of confirmed cases on board increased. As Crozier wrote it, his wartime vessel was simply not big enough to properly isolate and distance a crew of 4,000 men and women. As he put it, “sailors do not need to die,” provided the Navy stepped in and gave them access to isolate and test everyone, as well as properly clean the vessel. The San Francisco Chronicle picked up the letter, and every other media outlet soon followed. Within days, Crozier was fired.

Even worse? As of Monday morning, Acting Secretary of the Navy Thomas Modly essentially smeared Crozier in an address to his former crew, as reported by CNN. The criticism feels especially inappropriate given that the captain was met with cheers and support from his crew when he had to leave the vessel. As first picked up the Chronicle, you can listen to the audio at their site or at this SoundCloud link.

"It was a betrayal,” Modly said in a transcript of remarks as reviewed by CNN. “And I can tell you one other thing: because he did that he put it in the public's forum and it is now a big controversy in Washington, DC.”

"If he didn't think, in my opinion, that this information wasn't going to get out to the public, in this day and information age that we live in,” Modly can be heard saying in the recording, “then he was either A., too naïve or too stupid to be a commanding officer of a ship like this.” In the audio linked above, an unidentified person can be heard yelling, “What the f—k?” at that point.

“The alternative,” Modly continued, “is that he did this on purpose.” Modly also said the media has an agenda, sometimes used to “embarrass” the Navy and “you,” meaning the sailors he was addressing. He also described China as an “authoritarian regime” that was “not forthcoming” and “put the world at risk” to “protect their reputation.” He also said “what your captain did was very, very wrong in a moment when expected him to be the calming force on a turbulent sea.”

David Ignatius, who interviewed Modly about the decision to fire Crozier and covered it for The Washington Post, says he received an email from Modly summing up his mindset, including: “I had serious doubts about how this CO might act if, for example, the ship came under attack by hypersonic missiles, or by cyber forces that crippled his communications… It’s essential to love your crew, but it’s not sufficient,” Modly, who also stressed that he wanted to make the call before Trump ordered it to be done, reportedly wrote. In short, Ignatius reported, Modly communicated he believed Crozier was “panicking."

The other big question is, of course, how this firing came to happen so quickly. We know that Trump supports Crozier's firing as he criticized the letter during a White House press conference, saying it was “terrible,” as well as noting in typical Trump babble: “I mean, this isn't a class on literature.” But just last Wednesday, Modly said that the memo would not result in “any type of retaliation.” Come Thursday, Modly’s story had shifted—the captain had “poor judgment” in sending the memo to multiple people and not his direct superior. Defense Secretary Mark Esper also defended the firing on the Sunday shows, and has said the move was an “example of how we hold our leaders accountable.” An investigation is supposedly underway, per Esper’s comments on Sunday.

More than 170 sailors on the vessel have now tested positive for the virus, most have been tested, and 2,000 have been evacuated to the shore, as reported by CNN.

Arbeloa will be headed by one of the youth teams of Real Madrid next season
Terry is the best Central defender in the history of the Premier League, Ferdinand is the 2nd, van Dijk is the 10th (Squawka)
Fati is experiencing discomfort in the knee. Setien does not intend to risk the player
Sami Khedira: I want to win a lot of trophies with Juve. I see no reason to change the team
Solskjaer included Ronaldo, van der SAR and Giggs in the team of former teammates
Courtois about the quarantine: he Worked on the treadmill, worked with iron. I haven't lost my shape in two months
Chiellini about Pogba: in Juve, no one expected Paul to be the champion
Source https://www.dailykos.com/stories/2020/4/6/1934799/-Audio-leaked-of-Navy-Secretary-calling-fired-captain-stupid-sailors-shout-back-in-disgust

Coronavirus updates: Trump says US ending relationship with WHO

15 Father’s Day gifts for every type of dad

People are obsessed with this adorable 'hungry' family: 'So precious'

Virus ignited in US no earlier than mid-January, study says

The Infodemic: UN Didn't Require Ecuador to Legalize Abortion to Get COVID-19 Aid

The best true wireless earbuds of 2020

Taylor Swift calls out Trump over late-night Minnesota tweet: 'You have the nerve to feign moral superiority before threatening violence?'

HBO Max So Far Merits A Grade Of C+ As “An Opportunity Lost,” Analysts Say

Arrest of CNN Crew in Minneapolis a 'Violation of First Amendment'

Trump announces US ‘terminating’ relationship with WHO

CDC was 'never blind' to early spread of coronavirus within the US, director says

Economic Giants Are Restarting. Here’s What It Means for Climate Change.

What we know about Covid-19’s impact on black Minnesotans

We Wasted Our Chance for a Quick Economic Recovery

Sarah Sanders: 'We all need to come together,' George Floyd's family must get justice

The top summer plans families canceled due to coronavirus

90 Day Fiancé: Before the 90 Days Star Yolanda Admits She Still Loves Her Catfisher

Asian Americans Are More Represented In The Media Than Ever Before