WASHINGTON — For the past half century, the United States has trained and supplied the Saudi military, selling the wealthy kingdom more than $150 billion in dazzling high-technology weapons, including fighter jets and air defense systems.

And yet, the kingdom could not protect a prized national asset — its oil installations — from a recent attack by low-flying cruise missiles and drones that caused the largest spike in crude oil prices in a single day. The advanced weapons the United States sold to the Saudis includes the Patriot air-defense system, but it is deployed near important military installations, and not oil infrastructure.

Nor has the country’s military managed to defeat Iranian-backed Houthi insurgents in Yemen, despite a four-year, Saudi-led bombing campaign that has left more than 8,500 civilians dead and more than 9,600 injured, according to international monitors.

Even with American intelligence providing the latest in surveillance, the Saudi military has often been unable to act effectively, reinforcing a view among national security officials and humanitarian activists that — despite all the sparkling, expensive hardware — Saudi Arabia remains uninterested or incapable of defending its entire territory or competently and humanely prosecuting a war abroad.

During one incident three years ago, American intelligence officials gave their Saudi counterparts the location of 30 Houthi insurgents who had crossed the border and entered the kingdom. But the Saudis were unable to muster anyone to go after them, according to a former senior Defense Department official. The insurgents stayed in Saudi territory for eight hours — a period that included an extended rest break — all the while tracked by American intelligence before returning to Yemen, officials said.

To be sure, Saudi Arabia is an important American ally in the Arab world and a key bulwark against Iran. President Trump has praised the relationship while defending the kingdom’s leadership after the murder last year of Jamal Khashoggi, a Washington Post columnist.

Saudi Arabia, Mr. Trump noted, is an important trading partner of the United States. “They spend $400 to $450 billion over a period of time, all money, all jobs, buying equipment,” the president said in an interview on NBC’s “Meet the Press” in June. “I’m not like a fool that says, ‘We don’t want to do business with them.’ ” 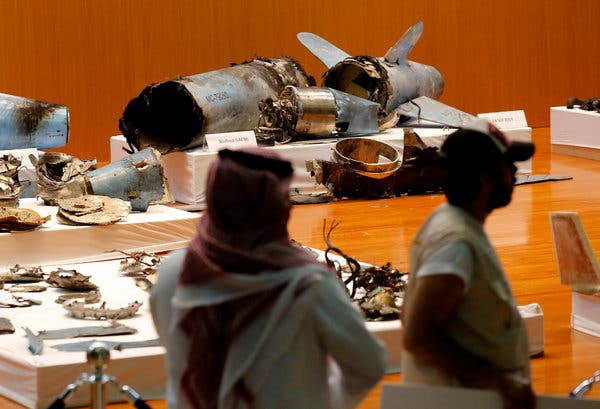 The Saudi military displays what it says were cruise missiles and drones used in a recent attack in Abqaiq and Khurais.CreditAmr Nabil/Associated Press

“Who doesn’t love a fancy jet?” asked Becca Wasser, a senior policy analyst at the RAND Corporation, a policy research institution. “For the Saudi military, it’s been about having prestige items, having a glitter force, without having the skill of being an effective military force.”

The attacks on the Abqaiq oil processing plant and the Khurais oil field brought that dichotomy into stark relief. While military officials say it is impossible to completely protect fixed targets, such as oil fields, from all aerial attacks over a large area, the fact that Saudi Arabia has multiple and often competing entities responsible for air defense meant there was little or no coordination within the Saudi defense complex. That helped stymie any effort to mount an adequate defense, Pentagon officials and military analysts said.

It is unclear whether any of the six battalions of American-made Patriot surface-to-air missiles that Saudi Arabia has purchased from Raytheon in recent years were deployed to stop the incoming attacks. Weapons experts say it is difficult, in any event, to stop low-flying cruise missiles.

“It would be inappropriate for me to talk about another country’s air defense systems,” Col. Patrick S. Ryder, a spokesman for Gen. Joseph F. Dunford Jr., the chairman of the Joint Chiefs of Staff, told reporters at a news conference on Thursday. He said that Central Command, which oversees American military forces in the region, is working with the Saudi military to see what went wrong and how to fix it.

A man standing in the rubble of a factory damaged during clashes between Saudi-backed Yemeni forces and Houthi rebels last year.CreditAgence France-Presse — Getty Images

Questions sent to the Saudi embassy in Washington regarding the professionalism and effectiveness of the kingdom’s military were relayed on Thursday to Riyadh, an embassy official said.

Four American military officers who have worked on training programs with the Saudi military described their frustration with Saudi counterparts. The Saudi military, they said, does not have the same kind of enlisted personnel corps that forms the backbone of the American military, and many officers rise because of patronage and connections to the Saudi royal family. The American officers spoke on condition of anonymity because they did not want to be identified criticizing an allied military.

These officers did note a particular strength of the Saudi military. The Saudi system lends itself to developing Special Operations forces, which are especially good at gathering intelligence inside the country. That same system is less capable at developing a large, professional armed force with a rigid code of discipline rooted in a strict chain of command.

For example, American officials said, the Saudi air force does not require the kind of sustained training, with mandatory monthly flying hours, that is required of United States Air Force and Navy pilots. During the early months of the Yemeni bombing campaign, that meant that many Saudi pilots were unable to fly low, and ended up dropping bombs from higher altitudes, causing more civilian casualties, according to one American Air Force pilot who has worked with the Saudi force.

One United States Air Force officer, who worked with the Saudis during Operation Southern Watch over Iraq in the 1990s, said that American personnel had to do all of the planning for Saudi pilots assigned to strike Iraqi targets in their American-made F-16s. And when those missions took flight, American warplanes led the way to the targets in southern Iraq, the officer said, in an escort service for Saudis that he likened to training wheels.

Since 1953, the United States has trained and supplied the Saudi military, selling the wealthy kingdom more than $150 billion in weapons.CreditMohammed Al-Shaikh/Agence France-Presse — Getty Images

Saudi Crown Prince Mohammed bin Salman’s Vision 2030 plan calls for reducing the country’s reliance on oil and transforming its defense industry, but it remains unclear whether the Saudi military itself is in line for a similar shift. Several national security experts said that for all of the crown prince’s lofty public statements about the need to modernize, he has not applied those goals to his present-day conflicts, including a decision to shore up defense systems at home.

“You get used to being able to punch people with immunity, and then technology progresses and they find a way to punch back,” Todd Harrison, the director of defense budget analysis at the Center for Strategic and International Studies, said. “It makes you question their weapons acquisitions.”

Balotelli wants Brescia to return him to the team or pay compensation. In the summer, the player will change clubs
Witzel on Sancho: He is one of the best players of his generation
Favre about Mike Sancho: I didn't see Anything – I can't judge. I don't know why he did it
The championship will resume on June 20
PSV does not plan to buy out Rodriguez. The defender will return to Milan
Bergomi on Icardi's transfer to PSG: Parisians don't have the prestige of Inter
Alan Shearer: I Want Mbappe to play in the Premier League. I see only one club for him – Newcastle
Source https://www.nytimes.com/2019/09/19/us/politics/saudi-military-iran.html?emc=rss&partner=rss

New York’s Days of Protest: What It Looked Like from the Streets

Michigan Sheriff Took Off His Helmet and Marched With Protesters

Players make MLB counteroffer in bid to save 2020 season

What images of burning buildings and broken windows tell us, and what they don't

E! "Stands In Solidarity" With the Black Community: "To Be Silent Is To Be Complicit"

'Deliberate, thoughtful love-making': Inside 'Insecure's' most romantic episode yet

Nationwide George Floyd riots are the price of liberalism: Devine

Police in New Jersey praised for marching in Floyd protests

This $14 product has been the secret to full, thick hair — ' If you are looking to growing your thinning hair back in then this is the product you want'

Protests flare again in US amid calls to end police violence

Public Goods has a personal care items for less than $10

Henrik Lundqvist is itching to take back his Rangers throne

Protests in Chicago in response to the killing of George Floyd

Alec Baldwin's Marriage Falling Apart Because His Wife Gave Him A Quarantine Haircut?

Tanker Truck Barrels Toward Crowd Of Thousands Of Protesters In Minneapolis

For years they've been seen as quiz show criminals. A new TV series may change that

Minnesota AG to take over prosecutions in George Floyd's death

Chicago Shuts Down Public Transit, Cuts Off Downtown Amid Protests

Juan Williams: Protests are a build up of coronavirus tensions and 'incredible wave' of abuse by police

Trump amps up calls for 'law and order' as protests persist

Christo, Famous For His Monumental Works Of Art, Dies At 84

Amid Riots and a Pandemic, Church Attendance Resumes in ‘a Very Broken World’