Artist Alexandra Grant discusses beauty, patriarchy and what her godmother taught her

Who knew hosting a “no makeup” dinner would be so newsworthy? Goop founder Gwyneth Paltrow required her famous friends to show up barefaced for the lifestyle brand’s dinner party on Feb. 19 at a Los Angeles estate once owned by Cher.

The dinner, which was attended by Demi Moore, Kate Hudson, Cassandra Grey and Goop tastemakers, made national headlines for being a makeup-free zone.

However, it’s the person whom Paltrow called a “feminine powerhouse” that evening who also deserves attention. And that would be L.A.-based visual artist Alexandra Grant, who has exhibited at the Museum of Contemporary Art and was once an adjunct professor at Art Center College of Design in Pasadena. 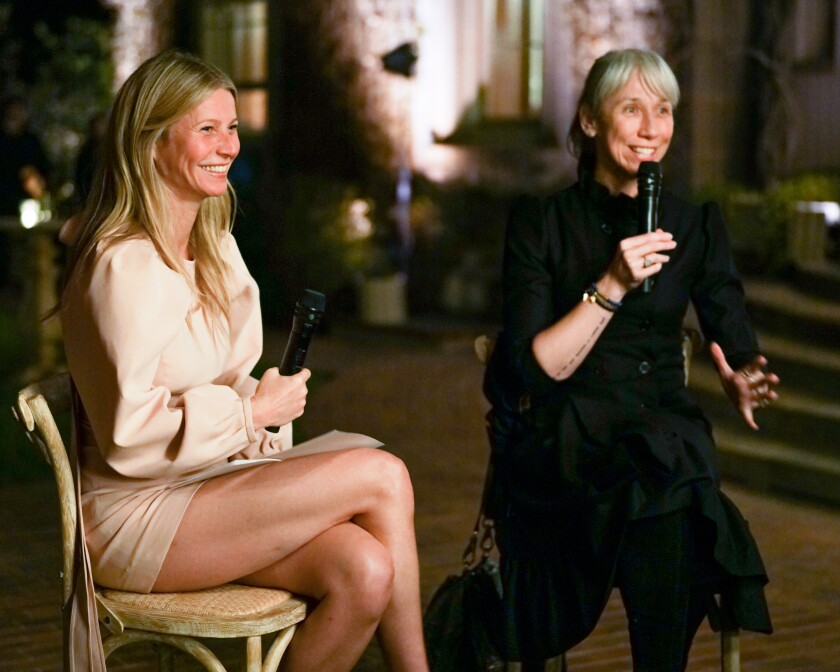 Gwyneth Paltrow, left, and Alexandra Grant chat with an audience of guests at a dinner party hosted by Paltrow and her brand Goop at a private residence in Los Angeles on Feb. 19.

Grant recently landed in the public eye when she stepped out holding hands with longtime boyfriend Keanu Reeves at the LACMA Art + Film Gala in November, and people mistakenly took her for Helen Mirren. Grant has collaborated with Reeves on projects including the books “Ode to Happiness” in 2011 and “Shadows” in 2015.

Last week, before a predinner discussion, Paltrow said of Grant, “We wanted to invite you here because your work is inherently amazingly feminist, and you also seem to be a woman who embraces exactly who you are and where you are in time and space. You’re very inspiring.”

Here are some edited highlights from their conversation. 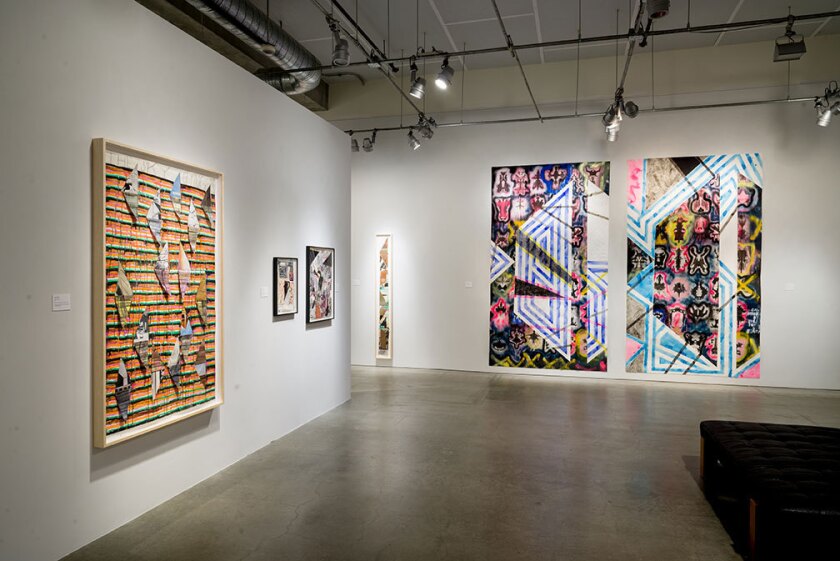 A look at artists Alexandra Grant and Steve Roden’s exhibition, “These Carnations Defy Language,” at the now-defunct Pasadena Museum of California Art in 2015.

1. On the politics of being a woman artist: “Frieze was last week, which is like the Oscar week of the art world,” Grant said. “One of the events at CAA was a conference around women in the arts, and there’s a statistic that [curator] Helen Molesworth brought up. From 2008 to 2019, of the top 26 museums in the country, only 11% of the work collected was [from] women artists, and when you start talking about women of color the number is like 0.2[%]. And so being a woman in the art world inherently is to be not thought of as mattering, and so for me, it’s so important to talk about, ‘Well, what is the psychology behind how women are seen and projected upon but also not seen and not valued?’”

2. On how psychology affects beauty: “Freud has such an important legacy in how we all think about beauty,” Grant said. “Let me tie this back in [to the topic at hand] before Professor Grant gets going again,” she said with a laugh, while discussing the early marketing of Betty Crocker, which enlisted Freudian logic, a topic covered on an episode of BBC TV’s “The Century of the Self” in 2005. “All of these ideas behind psychology are all about how we are manipulated, especially as women, to buy things because it’s inherent that we’re not enough.” 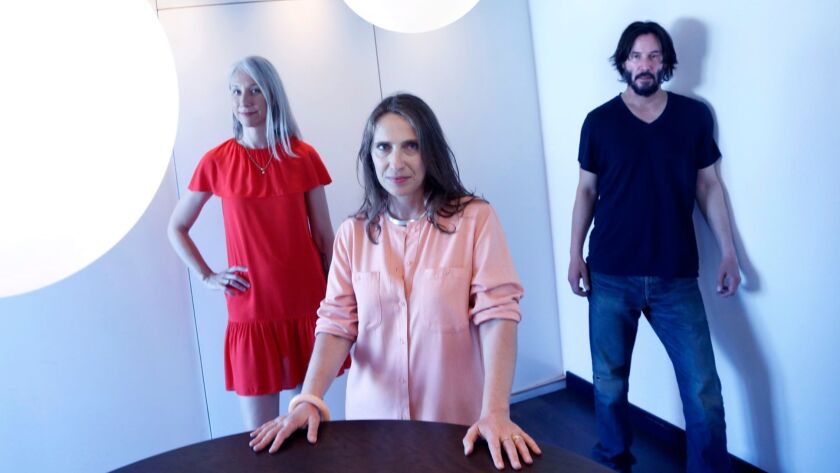 3. On Grant’s definition of beauty: “I was thinking about this idea of, ‘What is beauty to me?’” Grant said. “And it’s something that you can see with your eyes closed. Honestly, it’s being around another woman. For me, anything that is inherently competitive, especially with another woman, it can’t be beauty. Because we have to be around each other in a sense where there isn’t a scarcity model of competition. How is that processed? I think we’re seeing it on so many levels. It’s people going to therapy. It’s people identifying as witches, which is a phenomenon. Let’s not go down that portal.”

“It’s like, why are so many people trying to find a way into talking about, ‘How can I be fully present in the now? How can I be enough in my body and how can I hold that space if I have more than another person or another person to stand by my side as an equal no matter what their background is?’” Grant said. “Ultimately, I think it’s love. And it’s truly loving yourself. It’s loving the people in your community. And it’s learning how to love people who are truly different than who you are. And it’s that third thing that becomes the most important. That tripod of love will fall unless you have all three legs. And I firmly, firmly believe in that. Some people are so good at helping others, and they don’t take care of themselves. And the love falls over because they’re sick all the time or they haven’t learned how to take care of themselves.” 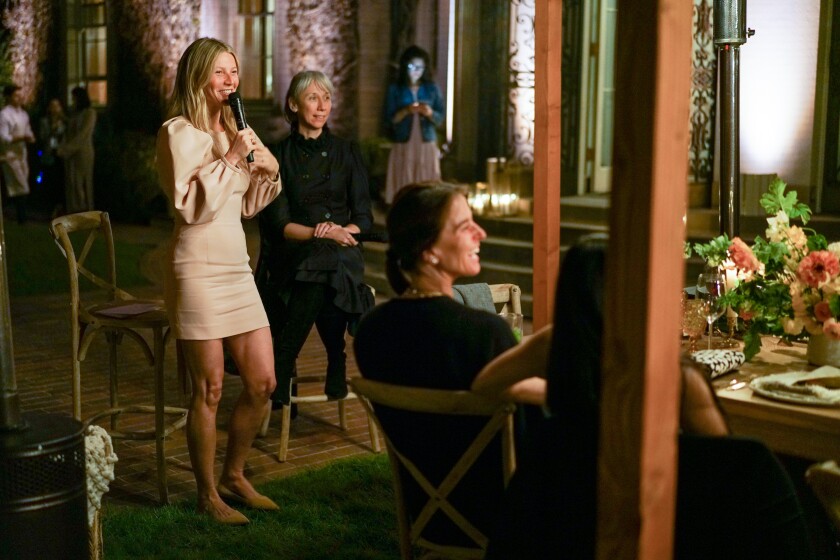 Standing next to Alexandra Grant, Goop founder Gwyneth Paltrow, left, addresses a dinner gathering at a private home in Los Angeles on Feb. 19.

4. On navigating patriarchy: “It’s in people,” Grant said. “They don’t understand they are carriers of it. … So how do we examine ourselves first to make sure we’re not carrying the patriarchy virus? I don’t know. I think first it has to be a conversation. One of the things I do as an artist is I serve on boards of directors. I’m on a board right now where there’s 32 people. There’s 27 white male chief executives. There [are] three women. There [are] two people of color. It’s so bananas. … So one exercise in boards is to bring in unconscious bias training, which is to say, ‘What is it that you inherently don’t know that you’re making an assumption about?’ ... There’s a really great nonprofit I helped found here in L.A. called the Women’s Center for Creative Work. It’s a little scrappy organization that sometimes gives away $100,000 of health-care grants to women and to artists. We did it in that group, and what happens when you do work? When you bring a staff and a board together at a nonprofit? The people who are working are not making very much money. The people on the board are some of the most privileged people in the community, and bringing them together, you see the inherent discrepancies within the organization. This young woman turned me and said, ‘Every time you guys use the word ‘visualize,’ I feel excluded.’ We were like, ‘What?’ She said, ‘I grew up poor [and] black. We didn’t visualize. Every time you use the word ‘visualize’ [I feel excluded].’ We were like, ‘Holy cow.’ That’s where I realized I had unconscious bias that I thought visualizing was accessible just because it was a word, and it’s not.”

5. On what she learned from her godmother: “Like many people, I was brought up codependent,” said Grant, “and suffering from issues of maybe low self-esteem but also not understanding [why], like, I moved a lot as a child, a lot of different cultures. … I think always having to have a lot of self-protection and adaptation in that sense of ‘Who am I?’ I had a mentor, a really wonderful woman who is my godmother, and she was the president of Sarah Lawrence College and the first woman to be chairman of the Rockefeller Foundation. Alice Ilchman [was] my godmother. When I was really young, she was like, ‘Can you write my speeches? Can you come over? Can you handle this?’ In relating to a stronger woman, I saw that that was something I needed. I’m still really lazy and so I still play this game with Alice, where I’ll look at the dishes in the sink and go, ‘I don’t want to do those dishes.’ But then I’ll think, ‘If they were Alice’s dishes, would you do them?’ And then I’m like, ‘Yeah, I’d do her dishes.’ So it’s like collaboration is a high bar that I hold myself accountable to. … Sometimes I feel like I collaborate with my best self, but it’s always having this higher bar. For me, the first person I felt that with was my godmother, where I wanted to hold up her standards. And also I saw the discrepancy between how I treated myself and how I treated a woman who I really admired, and I realized that that was a problem. And at 18, I didn’t know about codependency. I didn’t know about all the issues that women suffered from, but I knew that she saw something in me that was helping me heal and that helped me become a grownup — hopefully — woman.”

Two passengers on the Coral Princess cruise ship died on board. A third died after being transported to the hospital

Statue of Unity for 'sale': FIR lodged against Gujarat man trying to sell statue on OLX at Rs 30,000 cr

After Trump Bans All N95 Mask Exports, Canadians Remind U.S. That They Helped Americans After 9/11

Even with a pandemic, many older Americans are carrying on as usual

After virus, how will Americans’ view of the world change?