BUENOS AIRES — In the tense months after a submarine carrying 44 crew members ​went missing in 2017, Argentina’s intelligence service illegally spied on ​their​ families​​, ​ the ​current head of the agency said on Wednesday.

Intelligence officials said the agency uncovered three hard drives that show that family members’ activities and communications had been monitored in the coastal city of Mar del Plata, where the submarine was based.

The spying was not “ordered nor authorized by any judge” and that is why it was “illegal,” said Cristina Caamaño, the head of the Federal Intelligence Agency.

“We aren’t talking about terrorists or organized criminals but rather a group of family members who were trying to locate their family members trapped in the submarine,” Ms. Caamaño said at a news conference.

“This espionage is perverse,” Ms. Caamaño said. “The state should have been giving them answers, not spying on the family members.”

Ms. Caamaño said she had submitted her findings to a judge so they can be evaluated and, if merited, criminal charges filed. Some family members said they would demand that officials be held accountable.

“People need to go to jail for this” said Andrea Mereles, whose husband, Ricardo Gabriel Alfaro Rodríguez, was aboard the submarine. “It is unforgivable."

The accusations came as part of an investigation into the intelligence agency’s role during the previous government. President Alberto Fernández tasked Ms. Caamaño with overhauling the agency, known as the A.F.I., claiming it had long been used to keep tabs on domestic political opponents.

Members of the former administration, led by President Mauricio Macri, have broadly denied allegations that the intelligence agency was used for political ends. Neither Mr. Macri nor the former head of the agency commented on the specific accusations of spying on the families of crew members.

Acrimony between family members of the crew of the submarine, the San Juan, and Mr. Macri’s government grew as weeks and then months passed without news of the vessel’s fate. At one point several family members set up a makeshift camp outside Government House in Buenos Aires to try to get answers.

Family members had long said they suspected they were being spied on because their phones acted strangely and officials somehow were always one step ahead of them, seemingly knowing when they were going to carry out protests and which questions they were going to pose to officials.

Isabel Polo, the sister of Daniel Alejandro Polo, 32, one of the sailors aboard the San Juan, said she had thought someone had gained access to her phone, which would restart on its own, losing messages and images.

“We were demanding answers and their answer was to follow us and spy on us,” she said. “It’s so infuriating.”

Those suspicions were warranted, Ms. Caamaño said, saying that the agency had photos of agents following family members and evidence of them investigating relatives’ activity on social networks.

The documents dated from 2018 and 2019, meaning that the spying continued even after the submarine’s wreckage was found. 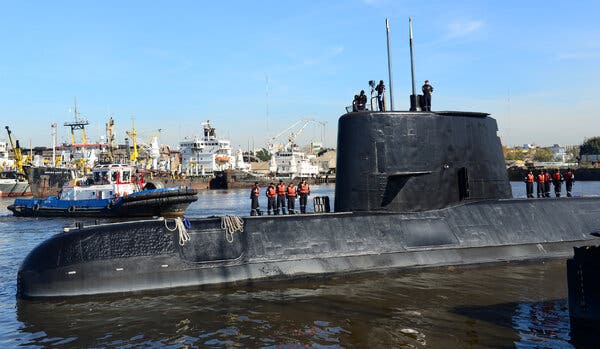 The San Juan and its crew leaving the port of Buenos Aires in 2014, in a photo distributed by the Argentine Navy. The submarine disappeared during a routine patrol.Credit...Reuters

The submarine disappeared while on a routine security patrol off the coast of Patagonia on Nov. 15, 2017.

From its earliest days, the search drew attention not only in Argentina but also worldwide. The loss of life was considered the largest involving a submarine in almost two decades.

The effort to find the San Juan involved military personnel from 18 nations and was one of the largest maritime search missions in recent history, drawing about 4,000 military personnel, 28 ships and nine aircraft.

As tense days stretched into a week with little news, the family members of the sailors on board hoped for a miracle.

When the first inkling of news about the submarine’s fate finally came later that month, it was not from the Argentine Navy, but from U.S. government analysts and an international nuclear weapons monitor, which recognized that an explosion had been recorded deep in the Atlantic Ocean near where the submarine was traveling just hours after its last communication.

At the time, many family members expressed frustration and anger at the Argentine government — for delaying the search operation, by giving them what turned out to be false hope and, broadly, for deploying submarines in commission since the 1980s.

That anger continued to simmer as the families pressured the Argentine government to find the San Juan. Once a private company, the Houston-based Ocean Infinity, located the wreckage in November 2018, the families began to push for a salvage operation that would allow them to recover the bodies of their family members for burial.

But the San Juan has not been salvaged. Experts warned that even if the costly operation were taken on, there would be no guarantees that all bodies would be recovered and that it was unlikely to help the investigation.

Some family members have continued to press for the wreckage to be brought to shore. The revelations on Wednesday renewed their anger at how they have been treated by the government.

“They treated us like troublemakers when all we wanted was the truth,” Ms. Mereles said. “Why were they spying on us? What were they afraid of?”

Arsenal will exclude Ozil and Sokratis from the Premier League bid
Bartomeu will miss the match against Ferencvaros due to a relative's covid. Barca President wants to get to the game with Real Madrid
Liverpool and Manchester United are among the clubs in talks to create a European Premier League
Thibaut Courtois: real want to win the Champions League and La Liga
Tiago and Matip didn't train with Liverpool today. They will probably not play Ajax
Griezmann will not return to Atletico from Barcelona
Miranchuk was included in Atalanta's bid for the Champions League match with Midtjylland
Source https://www.nytimes.com/2020/09/23/world/americas/argentina-missing-submarine.html

Workers being laid off twice as COVID ripples through economy

Did Bayern Complete Its Rebuild While No One Noticed?

CONCEIVED, STRIVED, CONQUERED: A boy from a town to the crown

It’s Google’s World. We Just Live In It.

Jeffrey Toobin of New Yorker Is Suspended After Zoom Incident

Roll over: LG's smart TV costs more than a BMW; here's why

‘New York, California, and Illinois, your states are way too highly taxed, big crime, people fleeing, and just about every other problem you can have.’ When Trump talks about Chicago — and the state of Illinois — we track it.

NASA's OSIRIS-REx to land on asteroid Bennu; why is it a huge deal for humanity