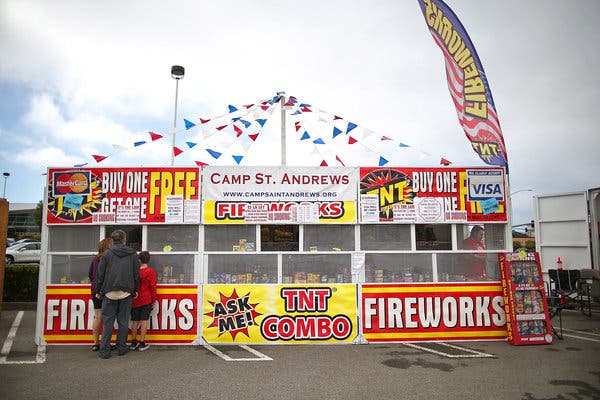 Customers shop for fireworks in 2014 in San Bruno.Credit...Justin Sullivan/Getty Images

(This article is part of the California Today newsletter. Sign up here to get it delivered to your inbox.)

Today we are have another installment of Your Lead, where we answer readers’ questions about how the pandemic is changing daily life in California. Christine, a reader in Livermore, asked: What’s the deal with the fireworks that are going off every night?

The booms and hisses that start at sundown and go well into the night have been a nightly fixture of my Los Angeles neighborhood since Memorial Day. When I let my dog outside to do his business every evening, the bangs, pops and fizzles send him scurrying back. On my local Nextdoor feed, neighbors complain about the toll caused by the constant barrage of booms: pets cowering under beds and the suffering of loved ones with post-traumatic stress disorder.

While it’s unclear if the problem is worse this year than last, what’s certain is that more people, perhaps suffering from frayed nerves or cabin fever, are filing complaints across the state. The Los Angeles Police Department said that complaints about illegal fireworks are up 170 percent this month compared to the same time period last year. The Alameda County Sheriff’s Office has also reported receiving more complaints than usual.

My colleagues in New York City reported on the uptick in illegal firework use there, where the number of complaints increased from 21 in 2019 to over 1,700 so far this year. Conspiracy theories have surfaced to try to explain the increase, but experts say it’s more likely that fireworks provide a release for millions of people who are bored and frustrated after months of sheltering in place. Shutdowns have also led to less noise pollution overall, so cacophonous booms may be more pronounced. Others say widespread cancellation of fireworks displays have caused the black market to be flooded with professional-grade inventory.

This year, Californians’ frustration over illegal fireworks arrive in the midst of rapidly rising Covid-19 cases and a robust fire season.

Shane Brown, the public information officer for the Fresno Fire Department, told me he sees aerial fireworks shooting off every evening from his balcony in downtown Fresno. During his shifts driving a fire engine, he said he has responded to dozens of fires in the last few weeks that he says were likely caused by fireworks.

“We are anticipating an incredibly busy Fourth of July here,” said Mr. Brown. The 80 firefighters on duty each day are already stretched thin, adding pressure to what he describes as an unusually busy season. The total fire response for his department has been up 60 percent from last year, he said.

State-approved fireworks are legal in some parts of California. The State Fire Marshal deems certain types “safe and sane” and some cities permit sales during specific time periods. If it projects off the ground or creates an explosion, however, it is most likely illegal, he said.

On Nextdoor, some of my neighbors said that while they were frustrated over the nightly noise, they would not call the police due to nationwide accusations of police brutality and they did not want to subject others to potentially unfair treatment. Others say that summer fireworks are traditionally a time when communities come together around the glow of sparklers, and that this year is no different.

However, illegal fireworks, like M-80s, which pack powerful explosives and pose a safety risk to users and bystanders, have been the focus of recent crackdowns.

Tips from citizens about the illegal sale of fireworks, which are often sold on social media, can sometimes lead to successful stings. Police in Irwindale recently seized 2,000 pounds of fireworks after someone tipped off police to search a home.

Mr. Brown urged people to think about their community before using fireworks this year. A spark from a single firework can ignite a pile of leaves that could send embers to the roof of someone’s home.

“This is a small sacrifice for one year to bypass the celebration,” he said. “To prevent what could be a catastrophic loss of life or even just a simple loss of property.”

Here’s what else to know today

We often link to sites that limit access for nonsubscribers. We appreciate your reading Times coverage, but we also encourage you to support local news if you can.

Motorists line up at a coronavirus testing center at Dodger Stadium in Los Angeles on Monday morning.Credit...Bryan Denton for The New York Times

Now, a quick update on the coronavirus pandemic: Noting what was probably his last chance to reach residents before the July 4 holiday, Gov. Gavin Newsom of California on Thursday implored residents to refrain from gathering with people outside their household — no matter how great the temptation — and to wear masks.

“The evidence is simply overwhelming,” he said in a video news conference. “Masks keep Californians healthy.”

Mr. Newsom unveiled a new public awareness campaign about the importance of wearing masks, having already ordered people to wear them in most indoor — and some outdoor — public settings.

On Wednesday, he announced that he was establishing teams to work with local authorities. The governor again emphasized that $2.5 billion in pandemic aid will be reserved for counties that do their share of enforcement.

Nevertheless, he said, “it requires some level of personal responsibility.”

[Read more about the restrictions. | See a map of coronavirus cases by county in California.]

If you missed it, read about why experts believe California’s “luck may have run out,” as case counts have exploded. [The New York Times]

Mr. Reiner in 2002. He was awarded the Mark Twain Prize for American Humor by the Kennedy Center in 2000.Credit...Ric Francis/Associated Press

Xavi: Messi needs Barcelona and Barca needs Leo. If he is happy, the club will win more trophies
Ex-referee Andujar Oliver on Saul's fall: there Was a light touch of the goalkeeper, but it was not a penalty
Alfonso Davies: As a child, I adored Messi, and now I will defend against him
Mesut Ozil: you get Disappointed when you know how good you are, but they don't let you out
Rummenigge on the match with Barca: Davies will take care of Messi. Alfonso has not been beaten this season
Flick about the Champions League match: This is not Bayern against Messi, but a game against Barcelona
Xavi: Setien's Barca Game is very similar to Cruyff's style
Source https://www.nytimes.com/2020/07/03/us/california-fireworks.html

Stream It Or Skip It: ‘Five Bedrooms’ On Peacock, An Aussie Dramedy About Five Single Semi-Strangers Buy A House Together

July 2020 was among the Earth's hottest months ever recorded

Brooks Koepka’s ‘regret’ has nothing to do with Dustin Johnson

Navigating the housing market during a pandemic

EMS workers are quitting. COVID-19 makes the job too risky

Nightstream Virtual Film Festival Will Launch In Time For Halloween 2020

Coronavirus live updates: Most deaths in a day since May; heavy toll on mental health; CDC director warns of 'worst fall we have ever had'

CNN Business Exclusive: 109 year-old IBM is planning to take on Amazon. Here's how

Biden says governors should mandate masks for next three months

Get an MBA style education from the comfort of your home

The Infodemic: Is Asymptomatic Spread of the Coronavirus 'Very Rare'?

Barcelona and Bayern meet in battle of past champions

The NBA’s regular season, at long last, is about to close

Florida sheriff funds $35,000-a-month luxury office with 'the money we take from the bad guys'