President Donald Trump signed a series of executive orders Saturday, including one that will provide $400 in enhanced unemployment benefits to millions of out-of-work Americans following the economic fallout from the coronavirus pandemic.

States have been asked to cover 25% of the costs. But there’s a catch: It’s unclear if Trump has the authority to extend unemployment benefits by executive order while side-stepping Congress. And it could take months for states to implement.

He directed the use of funds from FEMA’s Disaster Relief Fund, which would be capped at $44 billion, creating confusion among unemployment experts. The move could potentially bypass approval from Congress, some lawyers say, but it also leaves the door open to other challenges.

What we know: Trump extends unemployment benefits through executive order but cuts aid to $400 per week: What we know

'Insulin or groceries': How reduced unemployment affects struggling Americans from California to Mississippi

This could create issues with the Stafford Disaster Relief and Emergency Assistance Act, which includes a program that provides assistance to people who don’t qualify for traditional unemployment, according to Michele Evermore, a senior policy analyst at the National Employment Law Project, a think tank that advocates for labor and employment legislation.

“This is an administrative nightmare,” says Evermore. “States are going to have to set up a new program aside from regular unemployment insurance. It could take months for states to implement this.”

State governments across the country have to race to catch up with escalating demand for unemployment assistance. Many lacked the technology to deal with the massive wave of layoffs and furloughs, experts say, creating issues for their computer systems.

States can’t use their current unemployment insurance infrastructure to pay a benefit that isn’t authorized by Congress, according to Evermore. The language in the memorandum says that these benefits must be paid “in conjunction with the state's unemployment insurance system,” which means that states will have to set up a new way to add these payments to existing benefits, she says.

“Can he allocate disaster relief funds to pay something that looks like an unemployment insurance benefit? It’s unclear,” says Evermore. “This is just a false promise to the American people, and a way to dodge responsibility for the breakdown in negotiations in Congress.”

More than 25 million people had received the $600 weekly bonus that was part of the CARES Act in the spring, which expired in late July. With the enhanced unemployment aid capped at $44 billion from FEMA’s Disaster Relief Fund, Andrew Stettner, senior fellow at The Century Foundation, estimates that the additional aid will last just over a month, or about $10 billion per week, if the same number of people receive the bonus and if every state participates.

“It's a difficult proposition for states to implement in a short period of time," says Stettner. "States had already struggled to get unemployment money in the hands of out-of-work Americans. This will disappoint workers. They think they’ll get that $400 next week, but they’re not.” 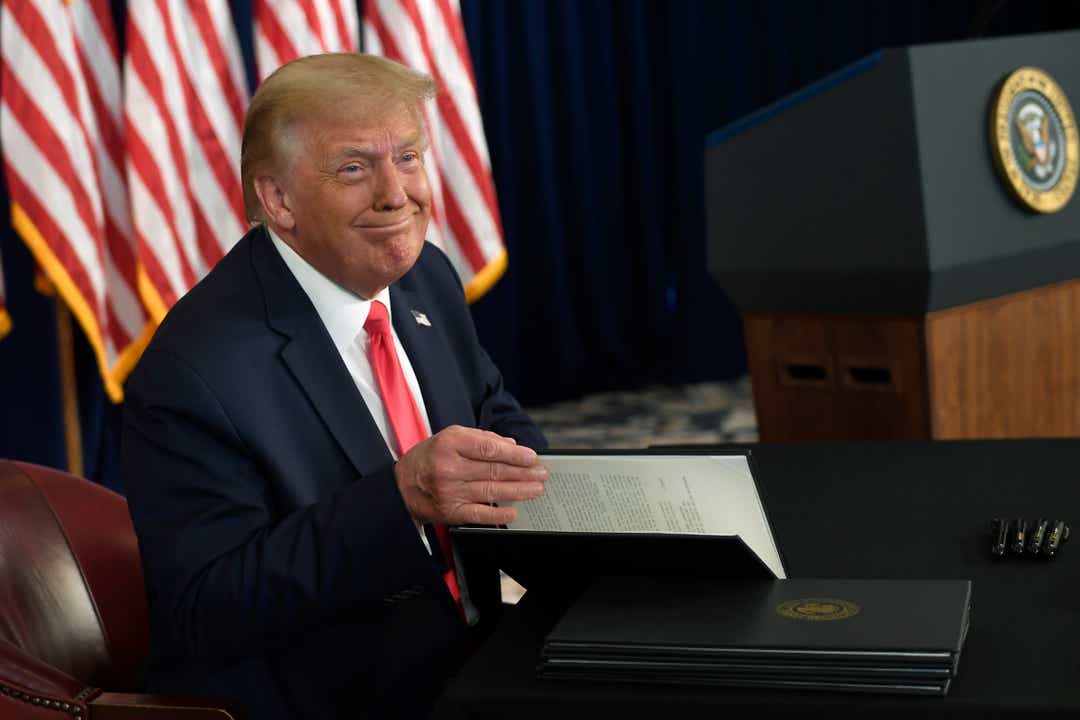 The funds from the Stafford Act are “discretionary in character,” says Jonathan Turley, a law professor at George Washington University. But they were designed primarily for natural disasters from hurricanes to drought to fires, he added.

“There is no question that this is a circumvention of Congress, which raises obvious concerns over the separation of powers,” says Turley.

President Barack Obama, for instance, announced a similar circumvention when Congress refused to approve changes to immigration and health care laws, Turley explained. The Trump administration has prevailed on other discretionary fights including the funding of a border wall.

Congress has approved billions of dollars under vague conditions, Turley added, but the latest executive order on expanded jobless benefits has created confusion over a potential cost-sharing program that binds states to pay a quarter of the costs.

Trump’s order would allow states to provide up to $400-per-week in expanded benefits, 75% of which would come from the federal government's disaster relief fund. States would have to pay the remaining 25% of the cost.

States may pay for their portion of the benefits by using money provided to them under a coronavirus-relief package passed earlier this year, the executive order says.

“There is a difference between discretionary funding and discretionary legislating,” says Turley. “The Constitution is designed to force compromise. However, that only works if the two branches have no alternative but to seek a compromise. President Trump is claiming that much of this money is unspent funds previously approved by Congress. That would be an issue for the courts.”

Democrats wanted to extend the full $600 benefit, but Republicans balked, arguing it was a disincentive for some Americans to return to work because they would receive more in unemployment than they earned on the job. Republicans wanted to bring the benefit down to $200. Trump's decision to order $400 in benefits splits the difference.

Mourinho went to the dressing room in the 77th minute of the game with Chelsea to bring back Dyer, who was not replaced
Manchester City have announced the transfer of Ruben Dias from Benfica. Defender signed a 6-year contract
Zidane on Vinicius and Rodrigo's playing time: They're still boys. This is Real Madrid, these are the realities of football
Braithwaite specifically stopped the car to take a photo with a fan in a wheelchair
Mourinho and Lampard had a fight in the Tottenham - Chelsea match: When you lose 0-3, Frank, you don't stand on the sidelines
Valencia want to rent Rugani from Juventus
We talked to a Russian Finn who is making his way in Europe: he fought with the locals because of Russia, drove in Arshavin's t-shirt and refused Barca B
Source https://eu.usatoday.com/story/money/2020/08/08/unemployment-benefits-trumps-executive-orders-challenged/3328428001/

For Boris Johnson, a Grim Premiership That No One Foresaw

Whether on a run or at the club, the adidas ZX has given you outstanding support for 4 decades

Your Best Strategy for Increasing Sales From Your Laptop

For young evangelicals, their faith is leading them away from Trump

Napa County evacuated as fires continue to overwhelm the state

Toyota-backed startup has flown (and landed!) a flying car

Review: A smart portrait of a living legend in ‘The Glorias'

Hillary Was Leading in Pennsylvania. What’s Different This Time?

WFAN is really close to a Craig Carton reunion

Shannen Doherty on her cancer: 'Not ready for pasture. I've got a lot of life in me'

A hip-hop community center could bring change to Syracuse youth: it needs the funding first

Flynn lawyer in fiery hearing tells judge to recuse self over 'abject bias,' says she asked Trump not to pardon

Woman who went missing 2 years ago discovered alive at sea

Zoo removes parrots from view after they kept swearing at guests

Stream It Or Skip It: ‘Inherit the Viper’ on Hulu, a Painfully Generic Josh Hartnett-led Crime-Drama

Fast-food buffets are a thing of the past. Some doubt they ever even existed.

Coronavirus was even more contagious at beginning of pandemic than experts thought, study finds

4 more states were added to Chicago’s travel quarantine list this week. Here’s what you need to know to avoid a large fine.

Lawsuit: Kansas woman posed no danger when deputy killed her

Biden will look ‘presidential as ever’ at debate no. 1, former DNC press secretary says

Early voting off to shaky start in Philadelphia: Report

SpaceX upgrades Crew Dragon capsule before its next astronaut flight

Celebrity men are fit after 50

Biden, Harris Release Their 2019 Tax Returns Hours Ahead of Debate, Challenge Trump To Release His

Why older women are seeking love with young men in Gambia

Customers facing frauds and Paytm is quiet; more stories of horror coming out

Here is where Trump and Biden stand on housing issues

Why 'herd immunity' can't save us from COVID-19

Jim Parsons Details His Coronavirus Experience That "Defied The Descriptions"

Mississippi State's Mike Leach on face coverings: 'I can't help but wonder if some of this isn't an homage to politicians'

Thinking of relocating? Read this first