FILE — This undated file photo provided by the Whelan family shows Paul Whelan in Iceland. Whelan, who also holds Canadian, British and Irish citizenship, was detained in December 2018. (Courtesy of the Whelan family)

An urgent email from David Whelan landed in the inboxes of journalists from Michigan to Moscow, and several countries in between, on Monday.

He was trying to locate his twin brother, Paul Whelan.

Sadly, not a rhetorical question. We have heard that Paul has been (when??) transferred out of Lefortovo/Moscow to (where??). No-one at the embassies knows either. If anyone is able to find out where Paul has gone, we’d be very grateful to know.

The family suspected that he had been shipped off to the republic of Mordovia.

Paul Whelan, a former U.S. marine, was found guilty of espionage in June, after what his family and observers around the world believe was a sham trial aimed at engineering a swap for Russians serving prison sentences in the U.S.

He was arrested in December 2018, accused of taking a flash drive from a Russian national containing state secrets. Paul Whelan believed the drive contained holiday photos.

David Whelan said the family believes his brother was set up by a friend who was seeking to avoid repaying a $1,500 debt. 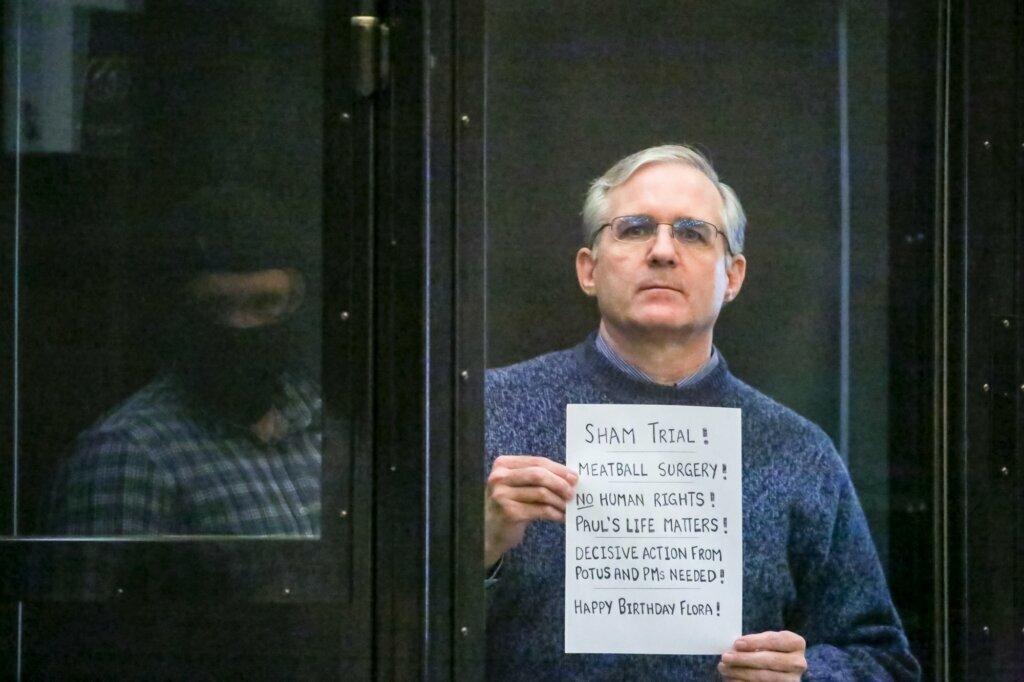 Paul Whelan, a former U.S. marine who was arrested for alleged spying, listens to the verdict in a courtroom at the Moscow City Court in Moscow, Russia, Monday, June 15, 2020. (Sofia Sandurskaya, Moscow News Agency photo via AP)

Late Tuesday afternoon, WTOP learned from a source — close to those working on Paul Whelan’s case for the U.S. government — that the man had indeed been sent to the “special regime penal colonies near Saransk, the capital of Mordovia.”

Separately, the U.S. State Department told WTOP, “We are aware of reports that Paul Whelan is being transferred from Lefortovo Prison to a prison in Mordovia. We have not received official notification of such a move.”

Not only did the Russian government fail to notify the U.S. Embassy in Moscow, or any of the other three countries where Whelan holds citizenship — Ireland, Canada and the U.K. — but they also apparently told no one.

“His lawyers were taken by surprise, too, because apparently, they weren’t aware he’d been transferred. They were planning to see him at Lefortovo next Monday,” David Whelan said.

Russia is required, as is every country, to notify the home country of foreign prisoners regarding such transfers.

David Whelan’s email triggered a flurry of activity in Washington, London and Moscow.

The UK Embassy spoke with someone at the (Russia’s) Federal Penitentiary System (FSIN) today (8/4/2020) who confirmed that Paul had arrived in the Republic of Mordovia last Saturday, August 1.

Despite reports that the prison monitors saw him in Lefortovo last Wednesday, we aren’t sure when he left.

The prison is located more than 2,000 miles from Moscow, and it is not uncommon to take weeks to arrive there via the “prison train.” That suggests Paul Whelan may have been spirited away long before last week.

According to the FSIN representative, Paul will be quarantined for 20 days in camp IK-18 and then moved to his permanent camp, IK-17.

Paul Whelan’s family is deeply concerned about what happens after he reports to IK-17. According to its latest statement, so is the U.S. State Department:

We reiterate our serious concerns with the failure of Russian authorities to provide Paul with a fair trial, and access to appropriate medical care. We continue to press for fair and humane treatment, and regular contact with U.S. consular officials. Paul’s health and welfare are of grave concern.

The U.S. State Department also vowed “to raise Paul’s case with the government of Russia at every level and to push for his immediate release.” Paul Whelan, right, a former U.S. Marine who was arrested in Moscow at the end of 2018, looks through a cage’s glass as his lawyers talk to each other in a courtroom in Moscow, Russia, on Tuesday, Jan. 22, 2019. (AP Photo/Pavel Golovkin)

It’s unclear what will happen next, but a source told WTOP that Russia is unmistakably angling to swap Paul Whelan for a Russian in U.S. custody. At the top of that list is notorious weapons dealer Viktor Bout. Another person of interest is Konstantin Yaroshenko, a convicted smuggler.

Until that or some other channel that leads to Paul Whelan’s release opens up, David Whelan said, the Whelan family remains concerned about their loved one’s well-being.

“I think it’s hard to believe that an American citizen in Russia could really just sort of disappear, and that there isn’t a way for anyone in that person’s family or in the government to really know where that person’s gone,” David Whelan said. “It’s very troubling.”

Manchester City refused to buy Coulibaly after the transfer of Dias
Conte wants to sign Inter Gervinho from Parma
Robertson and Trent contributed 33 goals in the Premier League in 3 years - the best result among defenders
In Genoa, 14 cases of coronavirus after the match with Napoli. Neapolitans play Juve on October 4
In the Premier League had identified 10 new cases of coronavirus. Players and staff isolated
Mane scored for Arsenal. Sadio has 3 goals in 3 Premier League games
Lacazette scored after a mistake by Robertson. The forward has 3 goals in 3 Premier League games
Source https://wtop.com/j-j-green-national/2020/08/american-man-held-in-moscow-secretly-sent-to-prison-camp/

A Look At Amy Coney Barrett's Record On Abortion Rights

How to use old blooms to make homemade potpourri

Where do Atlanta Falcons go after another epic meltdown?

Q&A: Will the Trump administration be able to ban TikTok?

Kennedy construction work leaves vehicles with flat tires: ‘Like the car went down a ditch’

Rangers’ Marc Staal aftermath and vicious moment that changed everything

Battered Broncos piling up injuries with all those losses

Cops hunt for thief who stole Torah from Yonkers synagogue

Rihanna claps back at fan’s comment on her skincare routine

Covid-19 twice as likely in teens than in younger kids

Trump went even further than other uber-rich to shrink taxes

Trump Really Wanted Ivanka As His 2016 Running Mate, According To Rick Gates

Listen to Episode 38 of ‘Gang’s All Here’: Jets Are Worst Team in NFL feat. Brandon Tierney

Trump Jr on father's taxes: 'People don't understand what goes into a business'

Harris to voters: Don’t give up as Trump rushes court pick

Trump, Biden prepare to debate at a time of mounting crises