Scores of American cities were on edge on Monday night as protesters faced off with the police for a seventh straight night since the death of George Floyd at the hands of the Minneapolis police. Curfews were ordered in New York City and throughout the country in an effort to stem the toll of deaths, injuries and vandalism that have accompanied demonstrations that grew violent.

The clashes have echoed in the streets of at least 140 cities, and at least five people had died as the country entered another long night. An untold number more, including protesters and police officers, have been injured. Thousands of people have been arrested and fires, looting and vandalism have caused millions of dollars in damage to buildings and businesses.

Amid demonstrations from the beach communities of California to the park right outside the White House, President Trump warned on Monday that he would order the military into American cities if officials could not get their streets under control. “We will end it now,” he said.

“Mayors and governors must establish an overwhelming presence until the violence is quelled,” the president said in a short address from the Rose Garden. “If a city or state refuses to take the actions necessary to defend the life and property of their residents, then I will deploy the United States military and quickly solve the problem for them.”

Before striding outside the White House gates, where the streets had been cleared by the authorities, Mr. Trump declared, “I want the organizers of this terror to be on notice that you will face severe criminal penalties and lengthy sentences in jail.”

That marches in response to Mr. Floyd’s violent death have themselves ended in injury and death was a contradiction deeply felt by those close to people who have died. “She would not have wanted this act of violence to instigate more violence,” Amy Lynn Hale said of her niece, Italia Kelly, 22, who was shot in her car in a Walmart parking lot in Davenport, Iowa, as she left a demonstration late Sunday night.

The growing toll came as a curfew was set starting at 11 p.m. in New York City — only the latest of dozens of cities, including Los Angeles, Chicago and Minneapolis, to order people to stay home as clashes have escalated. Nearly 20,000 members of the National Guard have been called up in 23 states.

In Minneapolis on Monday, Mr. Floyd’s brother Terrence made an emotional visit to the site where Mr. Floyd was detained, at one point kneeling silently at a memorial of flowers and signs. Terrence Floyd expressed concern about the destruction that had unfolded because, he said, “that’s not going to bring my brother back at all.”

Two autopsies were released on Monday, one by a government agency and one by doctors working with the Floyd family. The autopsies concurred that George Floyd’s death was a homicide, but differed over the specific causes and contributing factors.

In Washington, where windows of prominent buildings have been smashed, cars overturned and fires set, Attorney General William P. Barr expanded the response, increasing federal law enforcement in the city and directing the Bureau of Prisons to send in Special Operation Response Teams. 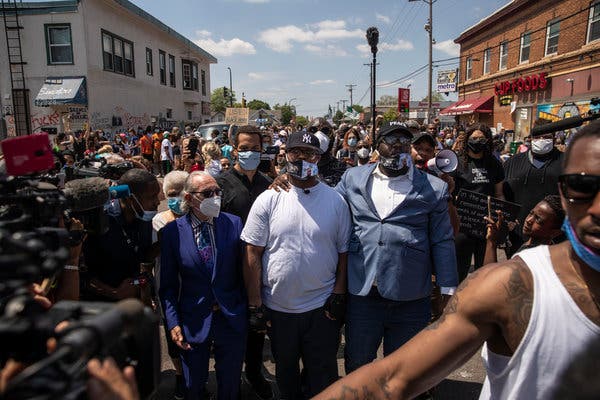 Terrence Floyd, the brother of George Floyd, visited the site of his death in police custody in Minneapolis, on Monday.Credit...Victor J. Blue for The New York Times

Determining the human toll of what has come after Mr. Floyd’s death is difficult and imprecise because protests have emerged in so many places. Much is still unfolding or unknown. At least five deaths have occurred amid unrest, while other deaths have taken place nearby but their ties to protests are uncertain.

In Louisville, David McAtee, 53, the owner of a well-known barbecue business, was shot and killed early Monday. The authorities said that officers from the Louisville Metro Police Department and National Guard soldiers opened fire in response to a gunshot as they tried to disperse a large crowd after a curfew had gone into effect. It was not immediately clear if Mr. McAtee had been killed by the police or someone in the crowd, the authorities said.

Mayor Greg Fischer of Louisville said at a news conference on Monday afternoon that he had fired the city’s police chief, Steve Conrad, after learning that officers’ body cameras were not recording during the shooting. The events further inflamed anger among demonstrators.

In Davenport, Iowa, after a weekend of large and peaceful demonstrations, two people, including Ms. Kelly, who had been at a protest, were killed by gunfire. The city’s police chief, Paul Sikorski, attributed the shooting to people in a group of vehicles that were roaming the city late Sunday night

In Omaha, a 22-year-old black man was shot to death by a white bar owner, a killing that the local district attorney announced on Monday was determined to be an act of self-defense.

And in St. Louis, a man was dragged to his death on Saturday morning beneath a FedEx truck that was apparently trying to drive away from protesters, officials said.

Other deaths in recent days have more tenuous ties to protests, ties that have in some cases become a matter of debate.

Outside a federal building in Oakland, Calif., a security officer was killed on Friday night. Chad Wolf, the acting secretary of the Department of Homeland Security, connected the shooting to the protests around the country, describing “an outright assault on our law enforcement community.” But other officials, including Gov. Gavin Newsom of California, suggested that links to the protests were less clear, saying that a motive in the death was not known.

In Indianapolis, two people were fatally shot over the weekend within blocks of a protest. Officials initially appeared to connect the deaths to the demonstrations, but a police spokesman for the department later said officials did not have “any investigative information at this time that leads us to believe these shootings have anything to do with protests.”

Around the country, injuries are mounting.

A reporter was hit in the eye by a rubber bullet. A police officer experienced a skull fracture. Protesters have been hit by cars and people guarding businesses have been beaten. An untold number of people have been sent to hospitals with broken bones or more serious injuries. Experts say that the possibility looms of a spike in coronavirus cases after days of gathering in large numbers.

Over the past week, arrests have reached into the thousands. The number of arrests in only a few major cities in recent days gives a sense of the scope: Nearly 500 people have been arrested in the Twin Cities, more than 2,000 in Los Angeles, and more than 1,200 in New York City. On Sunday alone, nearly 700 people were arrested in Chicago. Hundreds more have been arrested in cities big and small, including Philadelphia and Duluth, Minn.

Major chain stores, mom-and-pop groceries, statehouses and police precincts have sustained damage. Police cars have been burned across the country. Mayors of multiple cities have cited damage in the millions of dollars, a prospect ever more alarming given the economic straits cities were already facing amid Covid-19.

Still, hundreds of thousands of people nationwide have continued to gather and march peacefully, in the country’s biggest cities but also in far smaller communities.

“She wanted a peaceful protest,” said Ms. Hale, the aunt of Ms. Kelly, who died on Sunday night in Davenport. Ms. Kelly had been at the demonstration for only about an hour, her aunt said, when she started to sense that the tone of the protest was shifting. She and her friends were preparing to go, Ms. Hale said, when the shooting broke out.

“She was hit while she was in her car, ready to leave,” she said.

In Louisville, people on Monday were mourning the death of Mr. McAtee, who sold barbecue in the West Louisville neighborhood where he was killed.

Flowers and a package of beef tenderloin were left as a memorial for David McAtee at the feet of officers of the Louisville Police Department on Monday. McAtee, the owner of a local BBQ restaurant, was killed in an officer-involved shooting.Credit...Luke Sharrett for The New York Times

On the street where Mr. McAtee was killed, protesters gathered Monday to lament his death.

“He wasn’t doing anything to be killed,” one protester called out to officers who were lined up across the street.

Kolasinac will move to Bayer from Arsenal for 11 million euros + bonuses (Fabrizio Romano)
Dyer called the toilet the best player of the match between Tottenham and Chelsea
Ferencvaros will play in the Champions League group for the first time since 1995. This is the longest break between the first and second appearances
Jose Mourinho: what happened to Dyer is not normal, he was dehydrated. If the League management doesn't care about the players, I don't
Jose went berserk twice during the match with Chelsea: ran over Lampard and ran to look for Dyer - he rushed to the toilet right during the game
Lampard on relegation from the League Cup: we Need to keep a positive attitude. Everything will come if Chelsea score second, leading the score
Call of nature, what can you do? Dyer explained why he ran to the dressing room during the match with Chelsea
Source https://www.nytimes.com/2020/06/01/us/george-floyd-unrest-toll.html