After a Week of Turmoil, a Community Rallies

[Race affects our lives in countless ways. To read more provocative stories on race from The Times, sign up for our Race/Related newsletter here.]

The images of seething unrest are stark: violent clashes between protesters and police officers clad in riot gear; police cars on fire; storefronts defaced, looted; sidewalks littered with shards of glass and the remnants of tear gas canisters and rubber bullets.

In protests against police brutality across the country, scenes of chaos and disruption have unfolded nightly for more than a week, since George Floyd, a black man, died after being handcuffed and pinned down by a white police officer in Minneapolis.

Since then, the demonstrations have spread to more than 150 American cities. There have been hundreds of arrests and several deaths. Mayors have ordered curfews in the wake of looting, National Guard troops have been summoned and the president has threatened the deployment of military police beyond Washington.

Such unrest is not new: Several years ago, crowds rallied in dozens of cities, among them Ferguson, Mo.; Baltimore; Chicago; and Madison, Wis., to protest the deaths of black men at the hands of the police.

But what is often lost in the immediate aftermath of demonstrations, some of which turned violent or destructive, is how they can bring together a community — both to repair what has been physically damaged and to continue the work that started a movement. 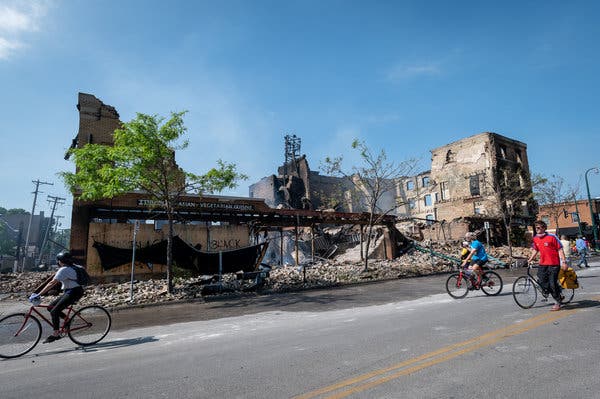 Last weekend, as intense demonstrations continued across much of the country, we asked a Minneapolis-based photographer to document her community’s cleanup efforts — both physically and metaphorically.

Volunteers converged on Saturday morning after four nights of chaotic protests. More than 100 businesses had been destroyed, including a bank across the street from a police precinct. They came out with brooms and other supplies and immediately got to work.

That same day, many paused for self-care and took an outdoor yoga class at the Zen Bin, a wellness center in North Minneapolis.

Hundreds showed up with bags of canned vegetables, cereals, and boxes of dry pasta for a food drive in front of the U.S. Bank on Emerson and Broadway Avenues.

Demonstrators continued to peacefully protest as cleanup efforts continued around them.

Throughout the city, memorials and messages of solidarity were created, including a colorful mural at East 38th Street and Chicago Avenue, the intersection where Mr. Floyd, 46, pleaded with an officer that he could not breathe.

Pep Guardiola: I would have stayed at Manchester City and in League 2
Manchester United is ready to sell Alexis, Lingard, Smalling, Dalot, Jones and Rojo
Frank Lampard: I expect more from Chelsea, but now the result is most important
Atalanta does not lose 15 matches in a row – 13 wins and 2 draws
Lorient threw one newcomer off a plane and sent another under the water-all for the sake of presentations on social networks
Pasalic scored a hat-trick in the match against Brescia. Atalanta smashes the opponent 6:1
Rummenigge on Ribery: Hennessy was like a second father to him, and I was like a second mother
Source https://www.nytimes.com/2020/06/03/us/george-floyd-protest-minneapolis-comunity.html

*Every* election is a change election now

COVID-19 could be controlled in 1-2 months if people wear masks: CDC director

'Difficult to attack vanilla': Trump's throwing everything at Biden, but nothing is sticking

Tennessee gov to do ‘whatever it takes’ in abortion fight

Delta Air Lines Reports $5.7B Loss In 2nd Quarter Due To COVID-19