In this Feb. 20, 2020, file photo, Demetria Hester reacts to verdicts of guilty on all twelve counts at the Jeremy Christian trial in Portland, Ore. (Beth Nakamura/The Oregonian via AP, Pool, File)

PORTLAND, Ore. (AP) — The arrest during a Portland, Oregon protest of a Black woman who became a leading activist in the racial justice movement after she was assaulted by a white supremacist three years ago has galvanized local and national Black Lives Matter groups.

Demonstrators took to the streets again Monday night and police broke up a protest outside a police precinct substation after they said protesters shined strobe lights at officers and hurled eggs and water bottles at them.

Nine people were arrested when clashes broke out at the protest that lasted into early Tuesday morning, with some protesters throwing rocks and golf balls in the mayhem. One officer suffered an arm injury in a scuffle for which she was treated and released from a hospital, Portland police said in a statement.

Portland has endured more than two months of often violent, nightly protests since George Floyd was killed in Minneapolis, including weeks of clashes between protesters and federal agents dispatched to the city by President Donald Trump in to protect a federal courthouse that was a focus of the demonstrators.

Authorities said the prominent activist, Demetria Hester, won’t be charged following her predawn Monday arrest after a protest that started Sunday night and turned violent outside the union headquarters for Portland’s police. 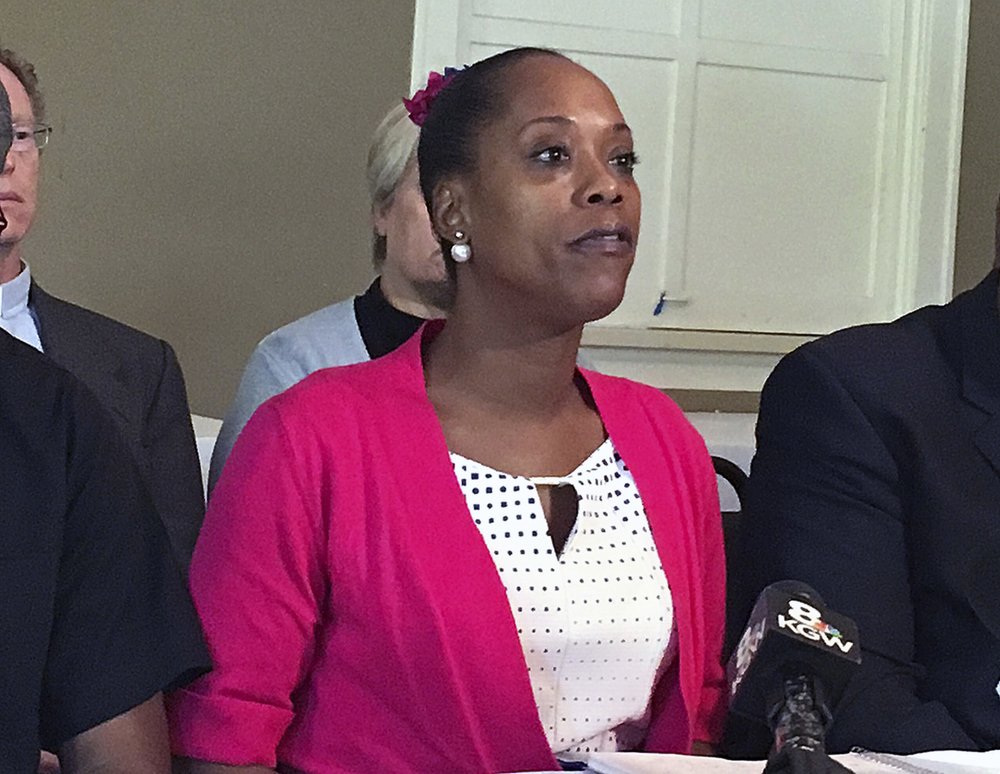 Hester, 46, had been booked on suspicion of disorderly conduct and interfering with a police officer during the protest. Hester’s arrest drew a sharp rebuke from national Black Lives Matter activists, who are increasingly focusing on demonstrations in Oregon’s largest city.

After her release, Hester told reporters that she would keep protesting and joined others in announcing plans for a fundraiser to send Black mothers to Washington, D.C.

“I was born and bred to do this. This is a dream come true,” Hester said. “This is a revolution and we’re getting reparations.”

Hester and 15 other people were arrested during Portland’s 73rd consecutive nights of protest, when a group of about 200 demonstrators gathered at a park and then marched to the union headquarters building, where some people set fires outside the building and launched fireworks at officers.

Two officers were injured, including one who was burned on the neck when a firework exploded, police said. Police declared that the event was a riot shortly after 10 p.m. and began arresting people, including Hester.

Trump again seized on the protests in the city where he has harshly criticized local Democratic officials and said on Twitter that Portland was “out of control.” He urged Democratic Gov. Kate Brown to bring in the Oregon National Guard.

Civil rights groups in Portland and members of the international Black Lives Matter organization, who traveled to Portland, decried Hester’s arrest and said the city was at the center of the racial justice protest movement. 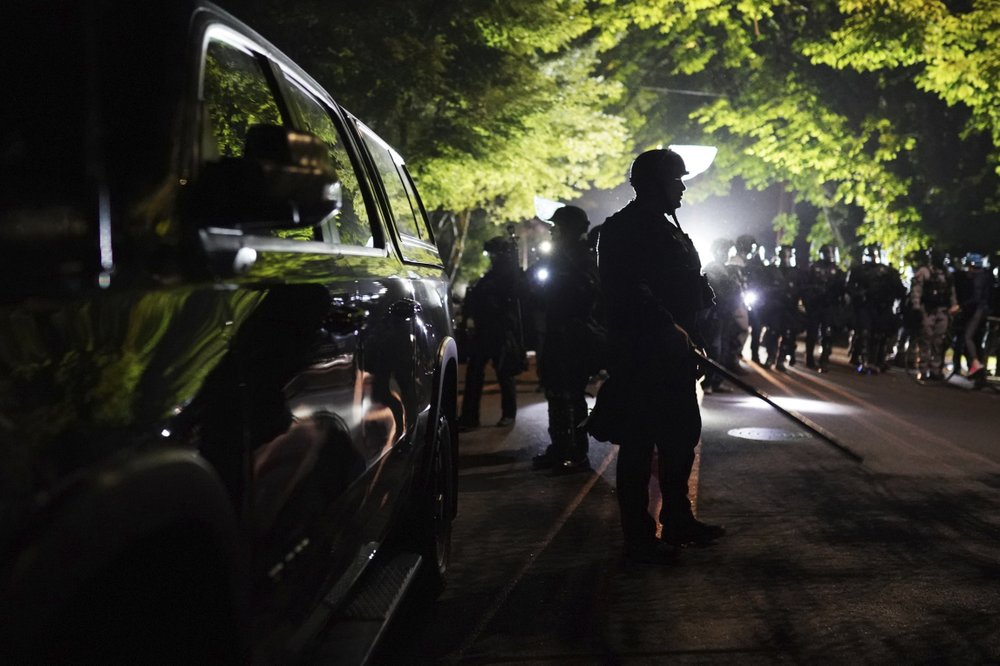 Portland police officers walk through the Laurelhurst neighborhood after dispersing protesters from the Multnomah County Sheriff’s Office early in the morning on Saturday, Aug. 8, 2020 in Portland, Ore. (AP Photo/Nathan Howard)

“The struggle here in Portland has become almost ground zero because what we’ve seen under this administration is the kind of flexing that we haven’t really seen in our generation, ever,” said Janaya Khan, co-founder of Black Lives Matter Toronto. “People only protest when politicians and policies and police have failed to protect them. ”

Hester gained prominence in 2017 when she was assaulted by a white supremacist while riding a light-rail train. The man who attacked Hester, Jeremy Christian, stabbed two men to death the following night and critically injured a third man when they came to the defense of two Black women — one of them wearing a Muslim head-covering — who were being harassed by Christian.

Hester gave emotional testimony this spring at Christian’s murder trial. Christian was convicted and given two life sentences without possibility of parole.

Hester has reappeared in public this summer as one of the main organizers of a group of mostly white parents who have been protesting nightly. She leads marches each night, using a bullhorn to chant in a voice cracking with fatigue.

Benteke alli at PSG: Playing with Neymar and Mbappe will raise his level. Dele will be great
Sandro Tonali: Zlatan is an example for Milan and an idol for everyone
PAOK FC have signed striker Colak. He was in the top 3 for goals in the Croatian League last season
Stan Collymore: bale at Tottenham is a move for losers. Tiago in Liverpool-Champions deal
Turkey is changing the limit on foreign players for the 9th time in 15 years. It seems that the tightening was lobbied by Erdogan and agents
Jovic wants to return to Eintracht Frankfurt. He doesn't like Zidane's attitude
Gary Neville: Manchester United need 4-5 players and only one has been acquired. There are no excuses for this
Source https://thegrio.com/2020/08/11/activists-arrest-portland-black-lives-matter/